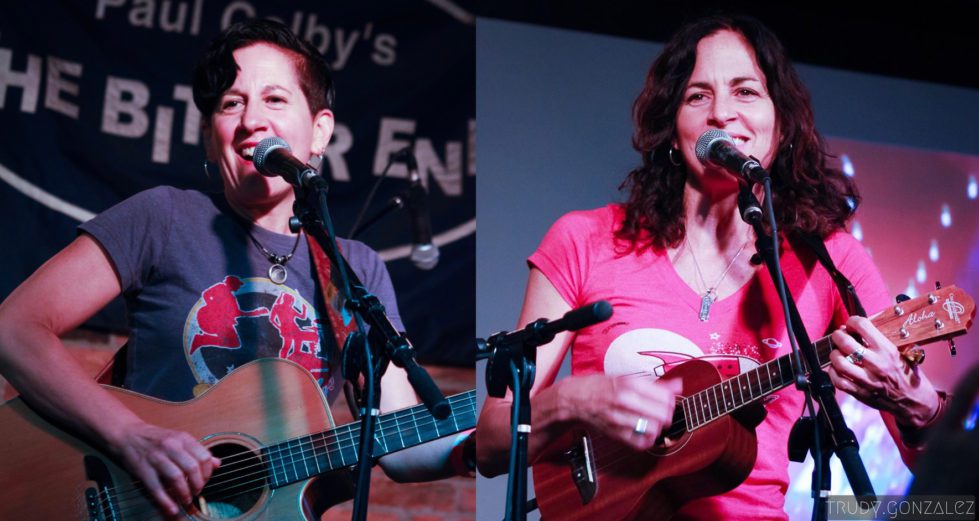 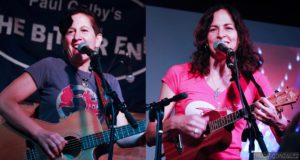 Lisa and Lori Brigantino will appear at Gallery 37 at 6:35 PM on July 30 during the Ladybug Festival

Growing up in a musical family, the Lisa and Lori Brigantino began performing since they were small children. Their cousin, Felix Pappalardi, produced Cream and was the base player for Mountain, a band he also produced. Two more cousins are musical engineers, and their aunt was a barbershop music arranger.

“We have a reel-to-reel recording of our family singing happy birthday when Lisa and I were still in single digits,” Lori said. “There are about 20 people there and we launched into singing happy birthday to great grandpa from Italy. He was a Renaissance man, a composer, book writer, you name it. We launch into the song and our Aunt Lydia, who arranged barbershop harmony as a child prodigy stopped us in the middle and said, “wait a minute, we can do a lot better than that.” Her brother said it was the most awful rendition of happy birthday ever. So, we all tune up and then it is perfect. That was kind of what we grew up around.”

Lisa began playing ukulele and piano with Lori also learning piano. Lisa gravitated toward string instruments while Lori preferred wind instruments. Lisa earned a bachelor’s and a master’s degree in music, music composition and music theory. She also works in the business side of the industry, dealing with contracts and licensing rights through her own company. For six years, Lisa toured the world with the first all-female Led Zeppelin tribute band. Lori attended the same college, eventually graduating with a degree in theater and a minor in music. The sisters performed as a duo and brought in a friend who was a singer to perform as a trio, something they still do on occasion. After touring with the Led Zeppelin band, Lisa asked Lori if she wanted to join her and the two began performing not only favorite covers but also Lisa’s original music.

“On a dare, we created a wacky musical comedy show,” Lori said. “We have alter-egos who are Midwestern housewives gone wild. The Vickie & Nickie Show is on the web, and we have live streamed it over the past few years. We tell a story and then do covers of pop songs that are really kind of inappropriate. We did our Christmas show from my living room last year.”

Despite their success in the music industry, both Lisa and Lori see sexism in the industry. They noted that women are vastly underrepresented, especially in the technical areas of music. Both sisters are pleased to see organizations like Gable Entertainment, who manage the Ladybug Festival, focus on promoting young women in the industry.

“We have to talk about it,” Lisa said. “When I toured with Led Zeppelin, I can’t tell you how many times I would look into the audience, no matter where we were, Germany or any country, there would be guys in the front row with arms crossed and faces that said, “this will not be good.” Then we launch into Immigrant Song or whatever and their jaws would be on the floor, and they became fans for life. I also feel that music isn’t valued as much as it used to be. You can see it in how we are paid or not paid for streaming. People don’t really buy music anymore, they kind of expect to get it for free. Plus, a lot of venues don’t pay the way they used to which is one thing we love about the Ladybug Music Festival because they make you feel so welcome and treat you well.”

Lori agreed with Lisa, stating that women are often underestimated in the industry which means they must prove themselves.

“In almost everything, women have to work harder to prove themselves over men,” Lori said. “But this is especially prevalent in the music industry.”

One of the most rewarding things Lisa finds with her music career is when she feels her music connect with someone else.

“As a songwriter and composer, I find it really rewarding and exciting when something that had a genesis inside my head can come out and be shared with other people,” Lisa said. “It’s very special to have people react to your music. We take entertaining people very seriously because we know we are living in some challenging times and it’s very stressful. So, if we can help them forget about their own troubles for 40 minutes or half an hour, we are happy to do that.”

Lori especially likes digging into the comedic side of her personality having acted in serious roles for a large part of her career.

This is the first time the sisters have performed the Ladybug Festival in Milford although they have performed at the Wilmington venue several times. They enjoy doing festivals as they feel it opens their music up to audiences who may never have heard them before. They will appear at Gallery 37 at 6:35 PM on Saturday, July 30.