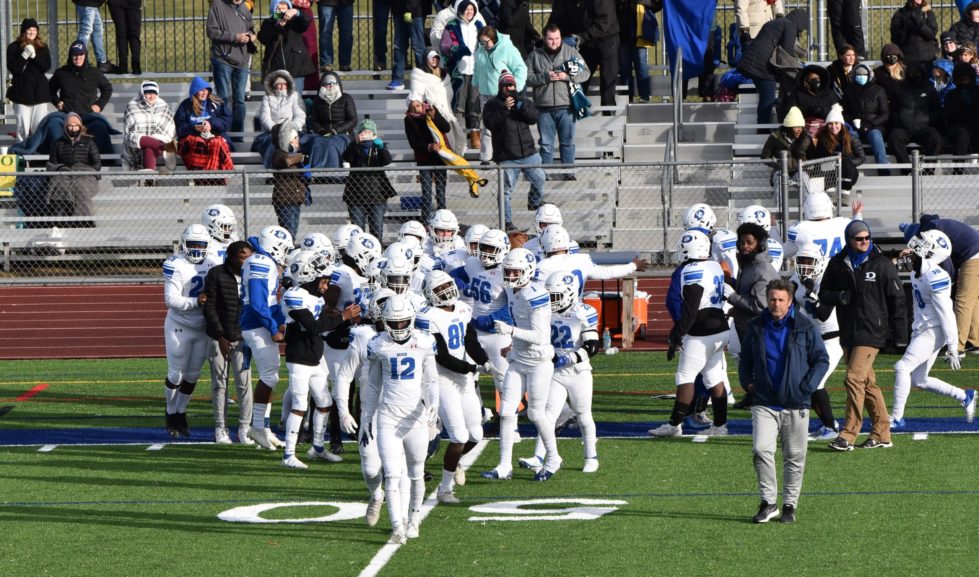 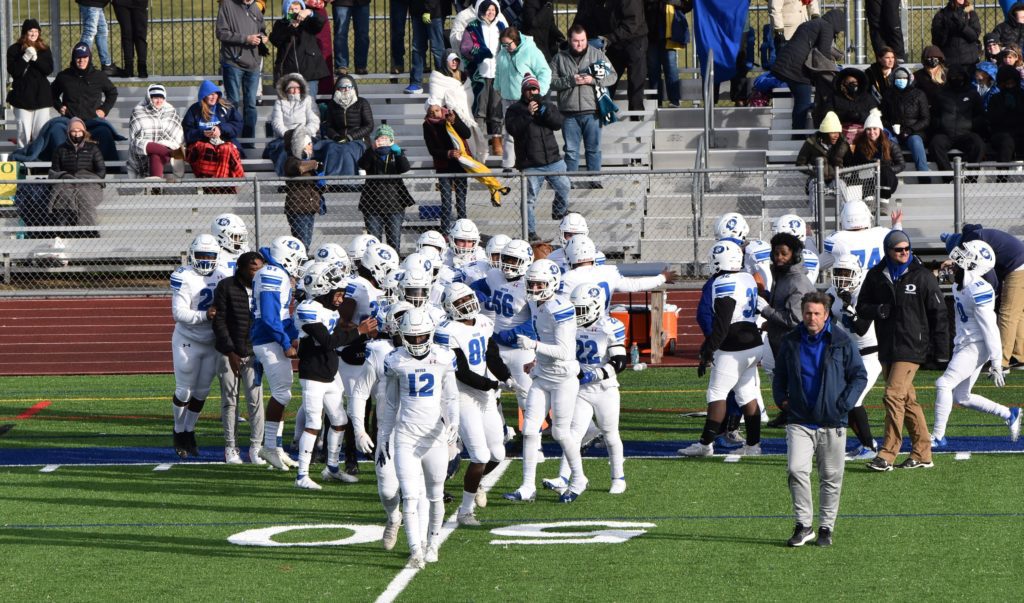 Middletown-The DIAA quarterfinal playoff game between the 4th seed St. George’s and 5th seed Dover was expected to be close, and the two teams did not disappoint.

A “bundled up” boisterous crowd witnessed a scoreless first half dominated by penalties and stellar defensive play as the Hawks and Senators held each  other “at bay” until the third quarter. Dover had the best opportunity to score in the opening quarter when freshman John Parker took the ball on a jet sweep for a 37 yard gain to the Hawks seven. Quarterback Jordan Moran ran a sneak for a touchdown that was nullified by an “aiding the runner penalty” so the Senators attempted a field goal by sophomore Brandon Yoder. He came up short on the 24 yard attempt but would get another chance later in the game when it counted the most.

Dover would score first midway through the 3rd quarter after stopping the Hawks and forcing a punt into the wind. Taking over at St. George’s 44 yard line, the coaching staff reached into the playbook and sent young Parker on another jet sweep. However, this time he circled back to midfield and lofted a pass to an open Tyir Trott at the ten and he ran it in for six. Yoder’s extra point attempt was blocked leaving the Senators up 6-0 with 7:34 to go in the third.

It would take just five minutes for the home team to answer and grab the lead. The Hawks marched into Dover territory on two runs by Gi’Vonni Sanchez and 2 passes from freshman backup quarterback Anthony Speciale to Kwami Miller and Brandon Montgomery. Speciale took over after starting QB Donovan Brooks was injured in the 2nd quarter. The fifth play of the drive resulted in a Dover interception as Tyron Abrams picked off a “tipped” pass at the Senator 45. The opportunistic Hawk defense recovered a fumble on the ensuing play as Naaman Tucker fell on the loose ball at the 47. “Work-horse” running back (Sanchez) carried the ball 4 straight times including a 4th and 1 run near the Dover 30 yard line. Two plays later Sanchez ran up the middle – broke to the outside and raced in from 27 yards out to tie the game at 6-6. Senior Julio Lopez nailed the point-after and St. George’s took a 7-6 lead into the final quarter.

The two teams traded punches like a “heavyweight” fight as neither could gain the upper hand until the Hawks moved to the Dover 24 with under five minutes to play. St. George’s drove to the Dover 24 but turned the ball over on downs with 4:12 left. After two incomplete passes (the 3rd time’s a charm), Jordan Moran found Elijah Sessoms at midfield as he out-jumped Tucker and ran to the Hawks five yard line for the longest play of the game (71 yards). I caught up to Sessoms after the game and he told me, “I was gassed at that point – playing the entire game on both sides of the ball. I went up to get it and ran as fast as I could.” The Dover offense could not score against a very tough Hawks defense and with 3 plays only got to the three yard line. That gave Yoder his “second chance” after missing an earlier field goal. The snap was perfect, Tyir Trott put the ball in position and Yoder split the uprights for the 20-yard kick  that gave his team a 9-7 advantage with 2:15 to go in the game.

St. George’s still had time and they made the most of it, moving from their own 37 to the Dover 24 in 7 plays in just under a minute. The first play saw Speciale scramble and hit Elijah Alexander in the middle of the field for 15 yards to the Dover 48. Three plays later Speciale zipped a sideline pass to Brandon Montgomery to the Dover 32 and he stepped out of bounds stopping the clock at 1:24. Another “out-route” connection to Sanchez put the ball at the 29 with :57 left. Then a close play followed as Speciale appeared to complete a pass to Montgomery right at the pylon for the potential go-ahead score, but he was ruled out. A pass to Miller set up a 4th and 2 from the Senator 24 with :44 on the clock. After both teams called timeouts, Sanchez took the direct snap from the wildcat formation and ran right into Sir William Bauer and Sessoms for no gain to seal the win for Dover.

St. George’s held Dover to just 23 total yards in the first half. Dover gained 149 in the second half with nearly half of those yards coming on the long pass play to Sessoms. The Hawks senior Sanchez completed an outstanding game with 126 yards on 30 carries and the lone touchdown. His rushing total for the season was 1,279 with 15 touchdowns. Speciale completed 8 of 15 passes for 83 yards.

For Dover, Parker gained 37 yards on one carry to lead the ground game, plus he completed a pass for 44 yards and the TD to Trott. Sophomore Nasheem Cosme carried the ball 4 times for 33 yards.

It is the first tournament win for Dover since the 2013 season. The Senators will meet Smyrna next week in the semifinals. The two met during the regular season with Smyrna winning 34-13.