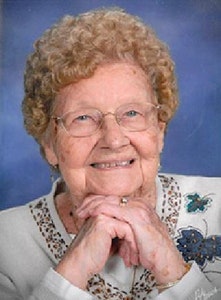 On April 7, Mary Gumrot would have turned 100 years old in the Milford Center, according to Patricia Tilghman, Life Enrichment Coordinator at the center. Unfortunately, Mary passed away suddenly two days prior to her birthday.

“Mary had a loving, caring nature and this was demonstrated in the love she had for her two children, four grandchildren and nine great-grandchildren,” Tilghman said. “She was a giving person and did not respect rewards for what she did.”

Mary was born April 7, 1920 in Chester, Pennsylvania, but grew up in St. Clair, Pennsylvania. She was the oldest of five girls, the daughters of Ukranian immigrants. Mary left school in the 10th grade to help support her family during the Great Depression and her father, who was an anthracite coal miner, was only working one or two days each week while her mother was not well.

In 1943, she married Michael Gumrot and they moved to Glenside, Pennsylvania. The couple had two sons. Michael worked at Standard Stressed Steel during the day and attended Drexel University at night, graduating with a degree in Mechanical Engineering. Mary was the head cook in Glenside Elementary School for more than 30 years.

“Neither of them made much money, but they lived in the same house for over 60 years,” her son, Michael, said. “Two bedrooms, one bath and a total of 635-square feet counting both floors. Mom never complained, just worked and did for us and always the Church. I never heard her curse or swear. She believed in doing the best you could and made sure her children strived for and got the best education possible. Then, work, marry and do the best you can for your own children.”

Mary was very active in her church, Assumption of the Blessed Virgin Mary Ukranian Catholic Church in Roslyn, Pennsylvania, which she and Michael helped to start. Michael passed away in 2003 and Mary’s son said she missed him very much.

“She considered my wife her daughter, the one she never had,” he said. “Her faith in God carried her throughout her life. I heard her say so many times to friends and staff at Milford Place, “I love you and thank you.” Through her last years, she never complained. What she added to this world was a constant smile and a pleasant comment to whomever she interacted in her last years, and they were a challenge.”

Michael and his wife, Carol, took care of his mother for the latter part of life and he hoped he did the right things by his mother, but believes that she now resides in heaven with his father and the God she so sincerely and completely loved all her life.

“She was a devout Catholic, a hard-working person and an avid baseball fan, especially the Philadelphia Phillies,” Tilghman said. “She will be greatly missed by her family and friends.”