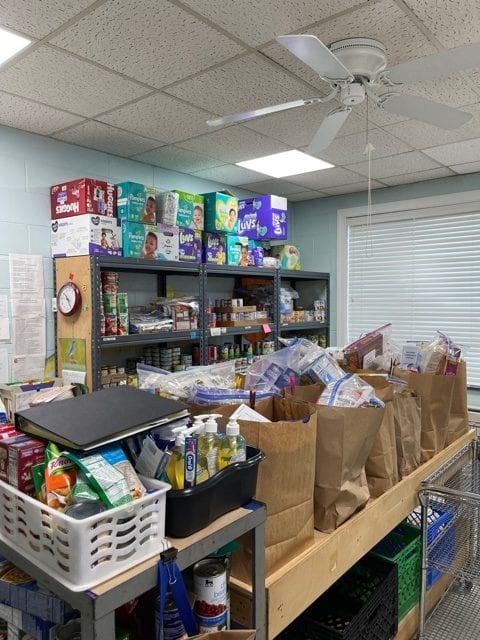 Milford Community Pantry offers more than just food to those in need. Diapers are also available.

The Milford Community Food Pantry, housed in the Avenue United Methodist Church, offers more than just food to those who have fallen on hard times. According to Tita Lewis, a volunteer at the pantry, the project began more than 30 years ago.

“We started a food bank here at Avenue a long time ago,” Lewis said. “It was the idea of the minister and a parishioner who felt we needed to help the less fortunate in the community. The churches in the area realized that all of them were providing a similar service, so they got together to create the Milford Community Pantry and we have been going ever since. The pantry is supported by the community and many local churches.”

The pantry, which is open Tuesday and Friday each week from 10 AM to 2 PM, provides those who are in need with five full meals. Mountaire donates poultry which volunteers then separate into bags and freeze. Other items are donated by members of the community, local churches and others. Panera also donates items to the food pantry, allowing them to provide bagels and breads from the well-known restaurant.

“We try to provide healthy meals as much as we can,” Lewis said. “We know that a lot of processed foods are not healthy, but many people who live in poverty purchase them because they are reasonably priced. At one time, we were getting those packets of tuna casserole and we decided to make it so we could taste it. It was really not very good. Now, we get them tuna, the cream soup and noodles which is so much better.”

Lewis explained that when the food pantry began, the Food Bank of Delaware did not provide food to individuals. Instead, they gave any food collected to local organizations, including the Milford Community Pantry. After the COVID-19 pandemic began, the Food Bank began offering drive-thru food pick-up programs which has cut down on the number of people using the Milford Community Pantry.

“We are feeding about 50 families,” Lewis said. “It used to be more than 100, but with the pandemic, many places are offering food boxes, so there is more supply and less demand. Before the pandemic, we were open five days a week, but we closed for a time because of the virus and decided to reopen two days each week. In July, we are attempting a night pickup for those who may work during the day and can only get here in the evening. We are asking that if you can get here during the day, you continue to do so to allow more people to access the pantry on the nights we are open.”

Milford Community Pantry does not limit their support to food. In addition, they provide laundry soap when they have it in stock, toilet paper, diapers and wipes. They do not stock Pull-ups but have diapers in sizes Newborn through 6. Anyone who needs diapers receives 24 diapers as well as wipes. Lewis stated that there have been people who pick up their items and are emotional because they have something as simple as toilet paper. One woman told her she had not had toilet paper for three days when she saw the roll in her bag.

“Everyone gets frozen meat, whether it is chicken, hamburger or hot dogs,” Lewis said. “We also provide them with cheese, cereals, some box mixes, just providing them with enough items to make five meals. Everyone also gets a voucher that they take to Redner’s to purchase milk, eggs and bread.”

The entire pantry is run by volunteers and Lewis explained that Diane Dolan was responsible for keeping the pantry organized and stocked.

“Diane needs recognition because she is here every single day,” Lewis said. “This is a lot of work and she puts a lot of time in to make it easier for us all. The woman who set up this pantry worked at Lutheran Social Services in Wilmington, so she was very well aware of the needs of a community. She felt that anyone could fall on hard times and that being poor did not mean you should not be treated with dignity and respect. We strive to continue that mission today.”

About 10 years ago, the pantry was in danger of closing due to lack of funding. Lewis went to the Milford Lions Club and ended up filling out a grant application for their annual non-profit agency program. The club awarded her almost the entire amount she was asking for, keeping the pantry open and allowing them to add the Redner’s vouchers. Funds raised are used to purchase the vouchers.

“God provided and here we are,” Lewis said. “Anyone who wants to donate can do so at Avenue or at their church. We accept food donations, but we ask that you check expiration dates as we don’t want to give away food that is expired.” Lewis stated that they have also been supported by the Milford Rotary Club and other charitable organizations in the town.

“We give food to families who meet the guidelines established by the government,” Lewis said. “Some who come to us arrive with a slip from Social Services. We do ask that you provide us with a driver’s license. Right now, we are providing food to anyone who comes in and says they need it because we know things are tough because of the pandemic.”

The Milford Community Pantry will open on July 14 from 4:30 PM to 6:00 PM, and the volunteers hope to continue the night program on the 2nd Wednesday of each month. For those coming to the pantry at night, volunteers are asking for proof of employment and a valid driver’s license. The pantry is located at 20 North Church Street in Milford.