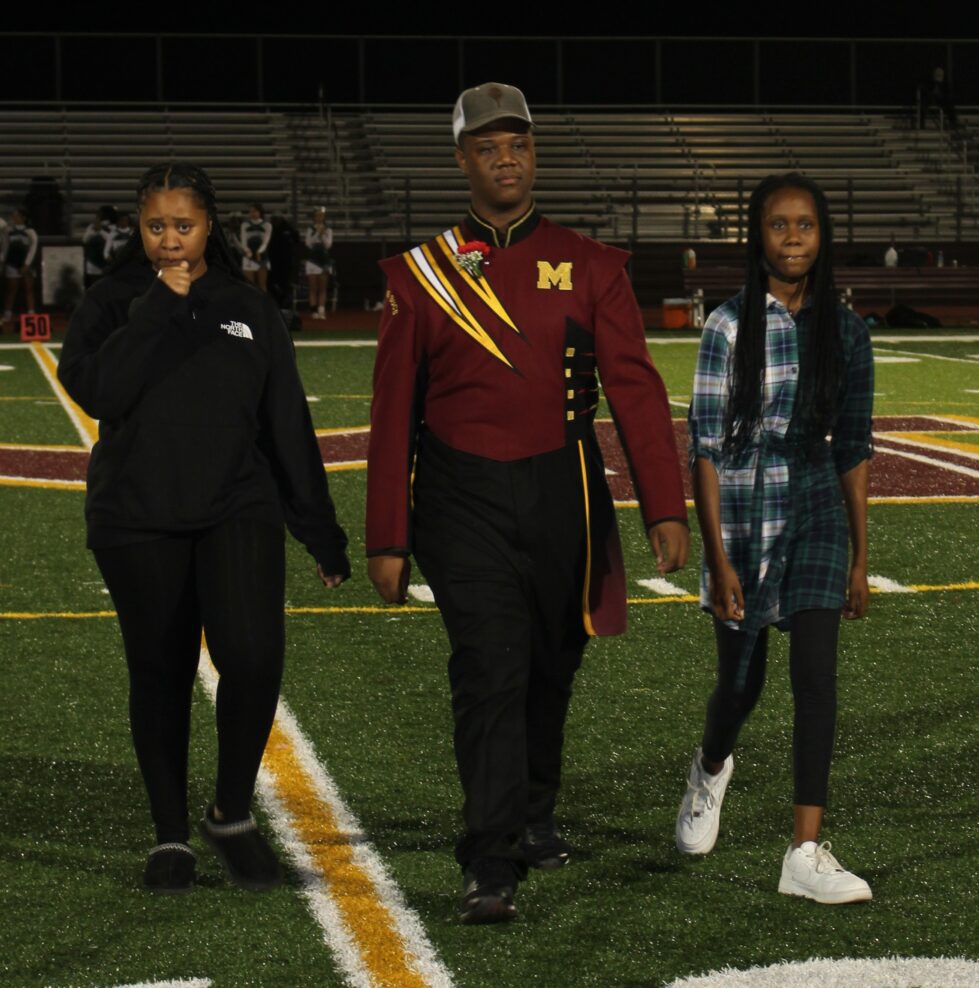 Three times Milford drove inside the Mount Pleasant 10-yard line and three times the Buccaneers failed to come away with any points. That proved to be the difference in their season-ending 28-14 non-conference loss Thursday night on Senior Night at Briggs Stadium.

The final time inside the Green Knights’ 10 proved to be the most painful of all. Facing third and goal from the five with less than 20 seconds remaining and trailing 22-14, Buccaneer sophomore quarterback John Hudson rolled right and fired a pass toward a seemingly open receiver; however, Mount Pleasant cornerback Anthony Sidberry cut in front and picked off the ball and raced 95 yards for the game-clinching score.

“Penalties and inconsistencies just killed us, so we’ve got to eliminate those things,” said Milford head coach Shawn Strickland, whose team finished the season 3-7. “We fought hard and stayed in it until the end. One mistake at the end cost us and penalties cost us in the red zone. Wish we had them back.”

Milford had reached the game’s climactic moment following one of its better drives of the night. Taking over at its 47 after senior Keith Owens’ outstanding kickoff return following Mount Pleasant going ahead for the third and final time, went 45 yards in 12 plays to set up the late drama.

Hudson connected with wide receiver AJ Kravitz three times on the drive, including a 10-yard strike which took the ball to Mount Pleasant’s five. The lanky wideout was also able to draw a pair of Green Knight penalties, including a game-saving fourth down interference penalty.

The Buccaneers fell behind early, as Mount Pleasant scored on its opening drive with tailback Dahmir Byrd raced 20 yards to cap four-play, 43-yard drive for the first of his three TDs. The point-after was true and the Green Knights led 7-0 with 9:55 left in the opening quarter.

Milford, however, had an immediate response going 53 yards in five plays in a tidy three minutes, with DenNare going the final 37 for the score. The two-point conversion, however, failed and the Bucs trailed 7-6.

After forcing a three-and-out, the Buccaneers would engineer its longest drive of the night moving from its 45 to the Mount Pleasant two, thanks in part to its use of the Wildcat formation with wide receiver Ryan Mejia ripping off runs of 19 and 9 yards, with the last setting up MHS with a first-and-goal at the MPHS five.

“Those guys got in and ran it (Wildcat),” Strickland said. “Mejia being one of our quarterbacks early in the season, but also an athlete. We knew it (Wildcat) would give them a little bit of fits, so we ran that and used that to our advantage as much as we could.”

Two runs only netted three yards to the two, where the drive would stall out as third and fourth down runs failed to gain any yards.

“We got to convert. Again, once you lose yardage on penalties and other times it’s missed assignments,” Strickland said. “It’s always tough. They’re a good football team. They’re big and they’re athletic, and we knew that coming in.”

Milford would take its only lead late in the second quarter after an Owens interception and return to the Bucs 49. It took only five plays, as Hudson hit Kravitz on a fade route deep in the end zone’s left corner for a 15-yard score. Hudson then hit Marquis Gillis on the two-point conversion pass and MHS was up 14-7 with 3:46 in the opening half.

Mount Pleasant, though, would answer on its final drive of the first half going 62 yards in six plays with Byrd most of the work gaining 45, including the last eight. The point-after was good and the game was tied at 14.

The homestanding Bucs looked to answer on the half’s final drive following Owens’ kickoff return to the Green Knights’ 38 but gained only four yards in four plays.

After each team turned the ball over on downs early in the second half, Milford made its second foray inside the Mount Pleasant 10, but again would stall at the five. Starting from its 20, the Buccaneers used a balanced run/pass attack to go the 75 yards. Hudson found Kravitz three times for 23 yards, while Mejia ran for 37 yards while operating the Wildcat.

Mount Pleasant would then take advantage to grab the lead for good, going 95 yards in nine plays with Byrd culminating drive on a five-yard burst. The running back accounted for 77 of those yards on the ground. A two-point conversion pass on a botched snap gave the Green Knights’ its 22-14 cushion with 4:41 and setting the stage for the game’s dramatic final series.

Strickland especially praised his seniors who played their final game as Buccaneers.

“Losing our seniors, that’s going to be hard,” he said. “Those guys fought hard all season and (Ryan) Mejia and Des (Desmond Aladuge) being four-year guys. Des obviously off to Duke (University) and Ryan and AJ (Kravitz) are going to be moving on to big things. I just love those guys, and it’s (graduating seniors) is the hardest part of the job.”

Prior to the game, 12 senior players along with band members and cheerleaders were honored in a pre-game ceremony.