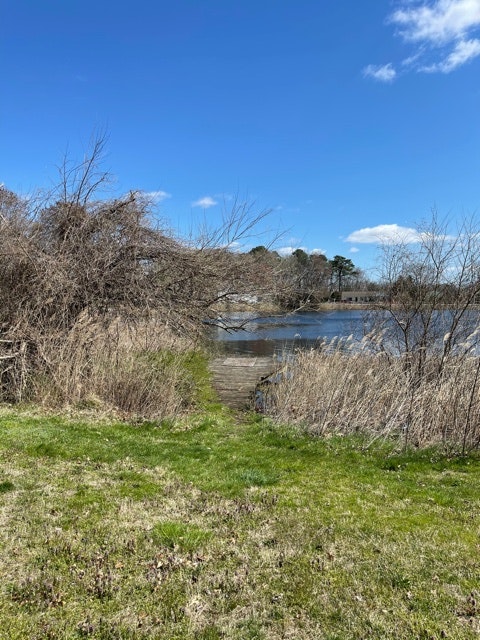 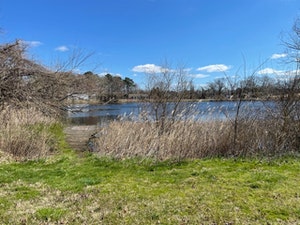 Gary Downes, President of the Milford Rotary, remembers fishing at Marshall Pond as he grew up in the neighborhood. A few months ago, he visited his mother who still lives in the area of the pond and learned that his nephews had attempted to fish there and found that they could not. Downes took a ride to the pond and saw that they were correct.

“The banks have all grown up and the dock is unsafe,” Downes said. “It does appear that people have cut an area on the bank to put a rowboat or canoe in the pond, but it is not the best. I reached out to Brad [Dennehy, Supervisor of Parks and Recreation] and he agreed that cleaning up that area would be very beneficial.” 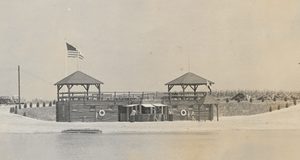 Marshall Pond playground and concession stand in the 1940s

According to Dennehy, the City of Milford owns eight acres of land surrounding the pond and they see how a boat ramp and dock would be beneficial to residents in the area. He is exploring grants and other options to help cover the cost of the project while the Milford Rotary is looking for other organizations to partner with them to bring the project to fruition.

“We are working with DNREC to determine the water quality in the pond,” Dennehy said. “We are very interested in exploring what we can do with this area as adding park land is always beneficial. People are looking for ways to spend time outside, so if we can create a nice picnic area and walking or biking trail here, that would be great.”

This is not the first time Marshall Pond has been viewed as a recreation area. In 1919, Hester Angeline Marshall sold the water rights and land surrounding the old mill site to Edward M. Davis who planned to turn the area into a park and recreation spot for the city. By 1919, the mill had been destroyed by fire. Davis planned to restore a damaged flume and work with Levy Court to widen the roadway over the dam. He intended to close off a portion of the lake for swimming so that boats and fishing could continue in other sections. 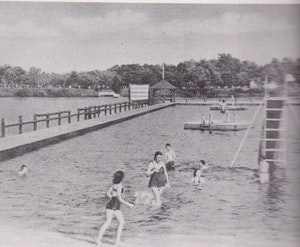 Marshall Pond recreation and swimming area in the 1940s

In 1933, the Milford Rotary began a community project to construct a playground on the shore of the lake. The project languished over the years until a gas shortage during World War II made it difficult for Milford residents to drive to Slaughter Beach. The project was resurrected and a large playground with a concession stand and dance hall was constructed. There was an open area on the second floor with a jukebox where dances were held in the evening. A boardwalk stretched from a sandy beach created from sand brought in for the project, around the lake. There were diving platforms and a sliding board in the water as well. The recreation area and the lake were closed in 1945 due to water quality.

For many years, the boardwalk was visible in sections on the pond but it has since disappeared. Over the past few decades, a dock jutted out from the shore where fishing was possible, but it has also deteriorated to the point it is not safe.

“I don’t know if we could ever bring back that big of a recreation area,” Downes said. “We want to create a five or ten year plan and just start with clearing the bank, creating a boat launch and putting in a nice dock. It would just be nice for families to have a nice place for a picnic along the lake, maybe do a little fishing and boating. It could be amazing.”