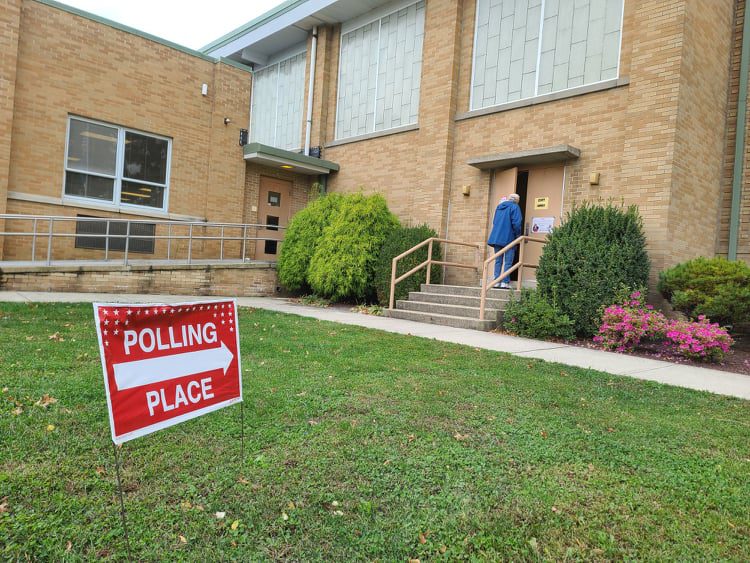 A voter enters the polling place to vote in the 2021 Milford School District referendum.

Students will once again walk the halls of the historic Milford Middle School thanks to local residents voting overwhelmingly in favor of the school district’s referendum.

The building at 612 Lakeview Avenue, formerly Milford High School, has sat abandoned since 2012. The Milford School District sought a referendum to rebuild the school in 2014, but that measure failed.

The plans call for a renovation of the historic portion of the building, which was built in 1929. The more recent additions will be demolished, making way for new construction better suited to a 21st-century learning environment.

In 2019, a committee composed of community members, parents, former educators, teachers and boardmembers held public hearings to determine the fate of the property.

The public overwhelmingly requested that the property be used for educational purposes.

With the Board of Education’s approval, the school district sought a Certificate of Necessity to build a 1,000-student 5th and 6th grade school.

The Department of Education issued the district a Certificate of Necessity in Nov. 2020, but the school board opted to postpone the request for a referendum in light of the COVID-19 pandemic.

Local residents fought to keep the historic building which played an important role in Delaware’s battle for civil rights.

The Milford Eleven being recognized in 2012.

Following the Supreme Court’s landmark Brown v. Board of Education decision in 1954, Milford High School attempted to integrate, admitting 11 African Americans — the Milford Eleven. The move was followed by boycotts.

Vernetta Palmer was hopeful that the referendum would pass out of respect for the school’s history.

“My family went to that school, so as long as they leave their historical part of the school there, I’m happy to see it,” she said. “We gotta have the history there with the Milford 11 and it’s just been sitting there for years. It needs to be something. It’s just empty.”

There was a feeling amongst voters that the referendum would pass long before polls closed, though.

State Representative Charlie Postles, R-North Milford, was the former president of the Milford School District Board of Education. He was just one of the many voters who supported the measure.

“I’m really glad we are able to redeem that property,” Postles said. “Part of the building has historical value and context about some important things in history. The property itself is nice and there are not many parcels of land of that size in town.”

He cited Milford’s significant population growth in recent years and said the new school will allow students in the district’s overcrowded existing schools some breathing room.

Scott Saxon, whose son Shawn is the quarterback at Milford High School, has had four children in Milford School District. Three have already graduated.

He said if he walks down the street in Milford, he’s sure to run into a fellow graduate.

“Milford people don’t leave Milford,” he said. “If you want to have good adults in town, we gotta have good kids in school. That’s where it starts. That’s why we need this.”

Even though Dan Cipullo didn’t grow up in the area and doesn’t have children in the schools, he supported the measure, too.

“I love Milford, absolutely love it,” he said. “Who wants more taxes? Nobody. But it’s worth it for the kids. I’ve been seeing stuff online about people not voting for it, but I don’t understand how you don’t support the schools. Schools are the heart of the community.”

Matt Bucher said that he supported the referendum because the district did such a good job making the case for its approval.

“Over the last couple of years they had multiple meetings and this is what the community said they wanted,” Bucher said. “The sheer volume of opportunities the district gave for the community to comment is not something you generally see in the other school districts.

“There is obviously a demonstrated need because of overcrowding. The amount of transparency by the superintendent and the district has been more than enough to persuade me that this is the right way to go.”

Carri Harring agreed. She has two kids in Milford schools. She said they come home and complain about how jam-packed the hallways are and how hard it is to get to class.

“My kids won’t see it now, but it’s important for the future,” she said. “We have to invest in our children.”