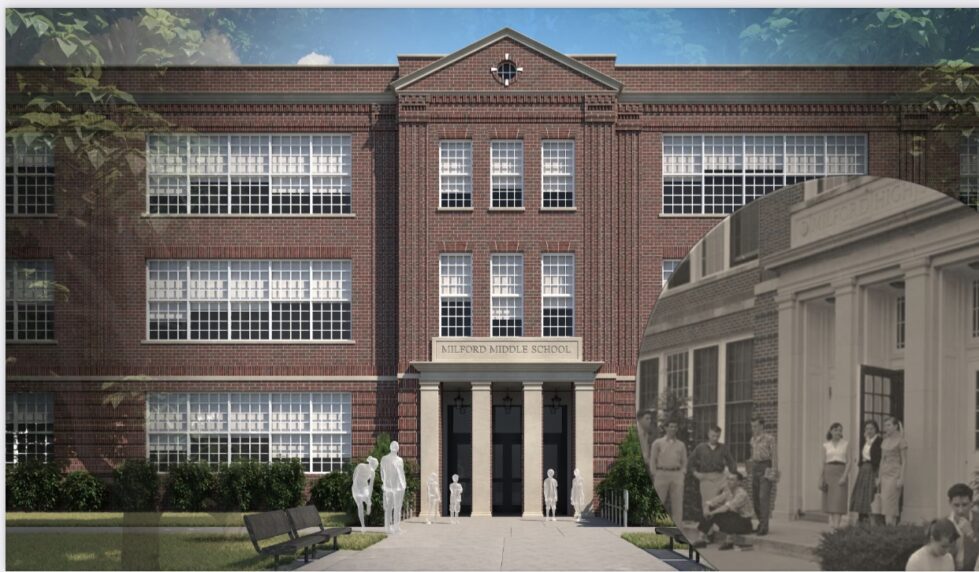 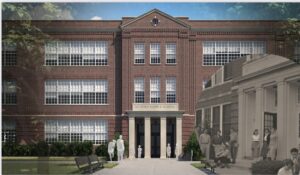 On Wednesday, January 4, Milford Middle School held their first meeting to present preliminary drawings to the public related to the renovation of the historic building. The district plans two more meetings as they get input from the public regarding what the school will look like after demolition and renovation.

“We began this journey back in 2018,” Dr. Kevin Dickerson, Superintendent, said. “We appreciate those Milford Middle School committee members who are in attendance tonight. As we had the planning process for about a year, the public made great recommendations which were supported by our board.” 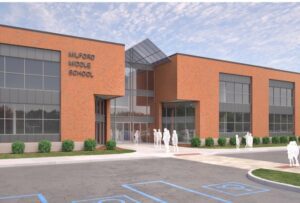 New entrance which will now be in the rear of the building for added security.

Dickerson explained that after the meetings of the committee which included public comment, the district was awarded a Certificate of Necessity in 2020 and held a referendum in October 2021 which was successful. The plan included keeping the historic section of the building, constructed in 1929 and demolishing newer wings which could not be salvaged. According to TetraTech, who conducted a thorough engineering review of the building, the older portion was salvageable although there would need to be some environmental remediation done to the interior. After the passage of the referendum, Richard Y. Johnson was awarded a contract to act as project manager and BSA+A was selected as the architectural firm. 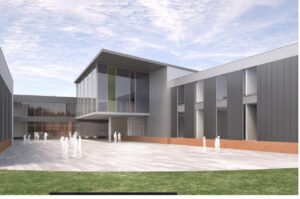 “We are about a quarter of the way through the timeline,” Dr. Sara Croce, Chief Financial Officer, said. “At the end of January, we hope to have Milford School Board approval of the schematic design and then we will begin the bidding process. There are a number of things that have to take place during that process. We’ll go through procurement procedures for demolition and for the environmental abatement work that needs to take place, then also for construction.”

Once those contracts are awarded, Croce explained that demolition could proceed, likely around August 2023. Tim Skibicki and Marine Rescinzki, both of BSA&A, then presented drawings of what the new building might look like once it is completed. 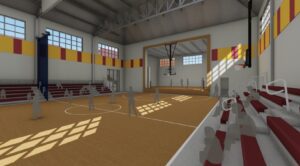 Gym which may be repurposed for three learning areas

“The historic three-story building will remain,” Skibicki said, presenting a rendering of the new façade with an historic photo imbedded in the slide. “It will no longer be the front entrance of the building. The original photo shows the scale of how high that entry space was. The goal is to bring it back to its former glory and make it something the community can be proud of.”

Additional slides showed the location of the existing gym and auditorium, but the cafeteria, which used to exist on the east side of the building near School Place will be moved to the west side near Kent Place. The main entrance will be moved to what is now the rear of the building in order to provide better security. The bus loop will remain in the same location with a special bus entry door for students. That entry can also be used for easy access to the auditorium for plays, concerts and other events. A new playground will be installed but the ball fields and track will remain untouched. 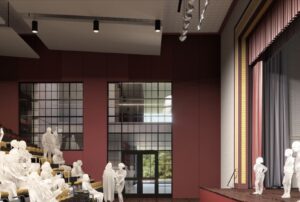 “It’s really going to have a park-like feel which is the goal,” Skibicki said. “We’re also proposing a safe walking path from the new front door all the way out to the fields. There is more of a design development that needs to be done, but that is the concept. You will also see this area here, what we call architecturally a cut-out. It is an opportunity to place a courtyard, like a plaza, which will also allow for future expansion.”

Other visuals showed a media center on the second floor with glass windows that may overhang the courtyard. The gymnasium stage would have partitions that would allow it to be used as a classroom and the gym itself could be partitioned into two spaces, providing the ability to create three spaces in one location. Gloria Markowitz asked whether the third floor was still going to be used for the Board of Education. Dickerson stated that there had been discussions about using the area for that, but there were other locations in the district that might be more suitable.

“We’re trying to bring in as much natural light as possible,” Rescinzki said. “The auditorium will have large windows and a stage area which could be for lectures, could be for events or even board meetings. The windows could be closed off to darken the room, but it would also bring in that natural light. Because auditorium space does not get used every day, the way we could maximize the potential is to look at telescopic seating, kind of like bleacher seating but more comfortable. They could be pulled out for events but then closed off so you have one level surface. This is another way of trying to repurpose different spaces and give a lot of different functions within these four walls.” 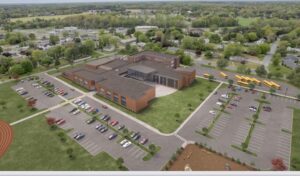 The architects tried to incorporate as much of the original building features as possible, using mostly brick and nice large windows similar to the window sizes in the historic part of the building. The existing building has a small, pitched roof that is a legacy architectural feature that will be incorporated over the front entry. The parking area next to Kent Place will be slightly smaller but there will be additional parking along School Place. The parking area near the track will also remain untouched.

“We have a section on our website,” Trish Gerken, Public Information Officer, said. “We actually have a QR code you can scan up directly to our feedback form and will also bring you to our website. We’ll have this presentation, we’ll have information about the project, the middle school committee, the referendum, that’s all found on our website. If you have any feedback or want to discuss anything about the building, we’re available.”

Feedback forms can be accessed at https://www.milfordschooldistrict.org/our-district/major-capital-projects/milford-middle-school/mms-project-feedback. Anyone with questions can call the district office at 302-422-1600.