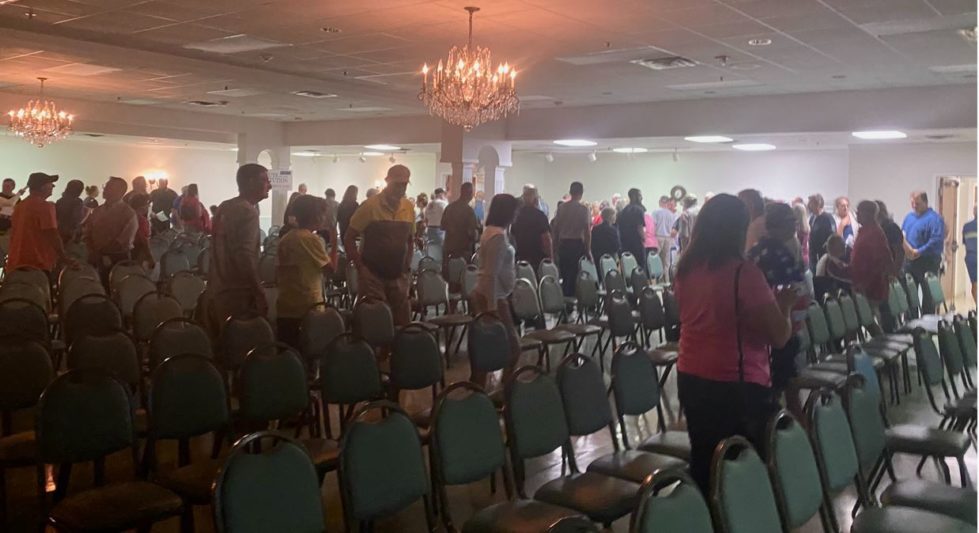 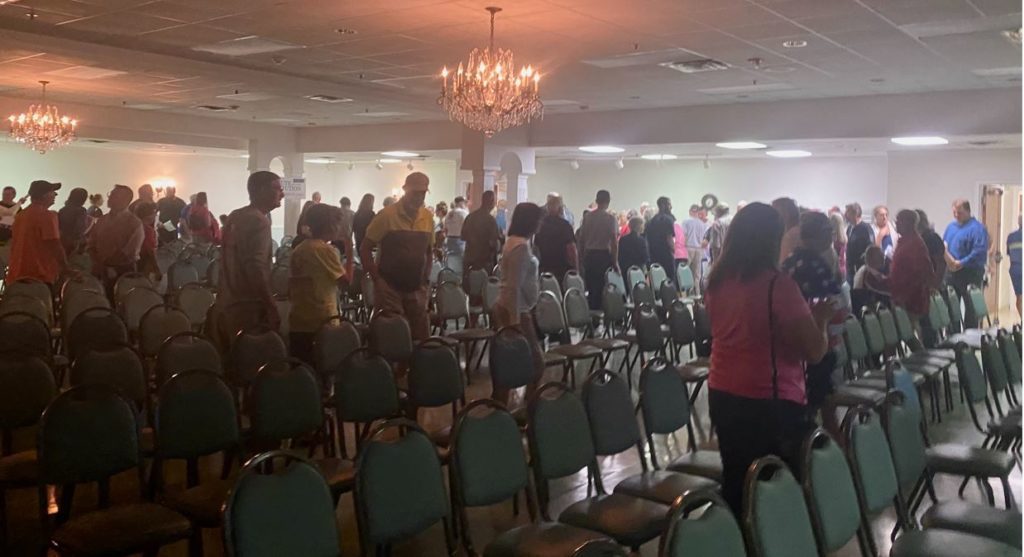 230-plus people file out of Tuesday’s Patriots of Delaware election fraud meeting in Milford.

Patriots for Delaware on Tuesday said they had evidence of dead people voting in the November 2020 election as well as nursing homes submitting more ballots than they had available beds.

The group doesn’t believe the fraud they claim to have found would have changed the outcome of the presidential election but said that local races could have been affected.

“I’m not going to go down that rabbit hole right now because we can’t prove it yet,” said James Davidson, who said he spoke on behalf of the election integrity committee. “We need to stay factual with this.”

In the presentation, Davidson pointed to one woman who he said was dead but was listed as voting in her maiden name. Davidson declined to identify her, saying he didn’t want to violate the family’s privacy.

He said it’s highly unlikely that the actual voter was someone with the same name as the deceased individual because the address and date of birth matched, too.

The group claims to have found multiple instances of nursing homes having submitted more ballots than they have available beds. In one instance, the group said they found that a nursing home had served as the address on 296 ballots despite having only 94 beds.

“The one thing we were afraid of was putting the names on there and then people calling them and harassing them,” Davidson said.

Davidson also cited abnormal voter registration trends and reported that many permanent overseas voters were using the Department of Elections addresses as their primary residences.

Delaware LIVE News could not independently confirm any of their claims.

The meeting at the Milford Senior Center Tuesday drew 227 people to hear the committee share the initial findings.

Davidson said every elected official in the state was invited to the meeting, as well as officials from the Department of Elections.

One member of Patriots for Delaware started the evening by instructing the crowd not to take photographs, audio or video recordings of the event.

“I just want to say — and this is on the record — I do not consent to audio or videoing this with me or what we’ve got to say,” said Bill Hopkins of Patriots for Delaware.

A member of the audience shouted in response,  “I do not consent to any video or audio either.”

The presentation included a slideshow detailing the committee’s findings.

“The team was diving into people that were elderly — that was the easiest place to start,” Davidson said. “They dove in and they were looking at obituaries and cross-referencing the obituaries with their addresses, their dates of birth, all that sort of stuff. That’s how they were able to find that.”

According to Davidson, the audit team includes forensic auditors with CPA and accounting firms as well as some in the medical field who are experienced in auditing.

The audit team found information on the nursing homes by calling under the guise of potential clients interested in learning more about the facilities.

“One of the things that our team has done is they’ve called around,” Davidson said. “They’re asking them ‘how big of a memory ward do you have?’ Another question that they’re asking is, ‘are you currently full? Are you ever full? How often do you think that your place is full?’ Because I’m debating on putting my mom or whatever.”

He said many of the questionable votes came from units with memory wards.

“Does anybody know what a memory ward is?” Davidson asked the audience. “That’s where you are locked in a room because you can’t be trusted to function on your own — So how are you voting?”

Patriots for Delaware passed a basket around the room and said they needed donations to pay for the venue and to buy software programs. Davidson said the programs will make the data easier to collate, analyze and “fill in some of the missing links.”

Asked later what software the group needed to purchase, he said, “I can’t answer that because — here’s the problem: If I answer that question, one thing that could happen is they might not sell it to us. Also, certain things that we need could just not be given or they could slam the door shut on us.”

Ideally, Davidson said, he’d like his audit team to work hand-in-hand with the Department of Elections to ensure election integrity.

Patriots for Delaware encouraged attendees to contact their elected officials, run for office themselves, volunteer to work at the polls and donate their “money, skills and prayers.”

They asked the audience not to harass any of the institutions mentioned in their presentation because they want to maintain open lines of communication with those groups.

They also warned attendees to “stay away from national groups that are making money to ‘help’ states with audits.” In the slideshow, the group wrote “most of these groups are run by RINO’s and have made no progress.”

“RINO” is a disparaging term that refers to a Republican politician whose political views are seen as insufficiently conforming to the party line.

Patriots for Delaware, however, claims that it is not partisan. Davidson said their name has caused many to incorrectly assume that the organization is a far-right group.

Davidson said election integrity should be a bipartisan issue, but that a satirical “hate group” on Facebook called “The Even More Patriotic Patriots for Delaware” has attempted to make a mockery of them.

Davidson said he doesn’t know when Patriots for Delaware will complete their audit.

“I don’t know that we’ll ever be done,” Davidson said. “You flip over this rock and there’s more crap crawling out from underneath it.”

At one point, Smyk took the microphone and addressed the audience.

“There’s no one silver bullet” to solving the problem of election fraud, Smyk said. “It comes down to all of you. Too many people have enjoyed their freedoms and they don’t recognize we’re about to lose them.”