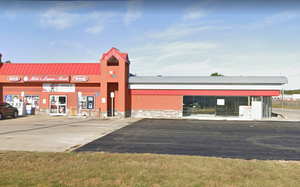 Triumph Youth Center will not be located in this vacant building after a January incident involving police.

On Feb. 22, a request to revoke a conditional use for property located at 350 Milford Harrington Highway was presented to Milford City Council. The request was made by Chief Kenneth Brown after an incident on Jan. 30, 2021.

“I have been informed by the landlord that the tenant has been evicted,” Chief Brown said. “If this is the case, I am willing to withdraw my request to revoke the conditional use as I understand that goes with the building and not with the tenant.”

According to Chief Brown, there was a report of a large fight with shots fired. In addition, burglar alarms in adjoining businesses were sounding at around 1:00 AM. In July 2020, Hattie Harris was given a conditional use permit to open a daycare, known as Triumph Youth Center, at the location. When officers arrived at the scene, there were between 50 and 75 vehicles present and windows were blacked out. As police arrived, vehicles began fleeing, leading to a rear end collision with one of the vehicles involved leaving the scene. Numerous spent bullet cartridges were found between the location and the intersection of Route 113 and Route 14. An investigation also revealed that a vehicle had its rear window shot out in the parking lot. No injuries were reported, but the building should not have been occupied without a Certificate of Occupancy. When she was interviewed the following week, Harris admitted that she had sub-let the building for a party.

“I cannot explain how embarrassed and sincerely sorry we are that whatever happened a few weeks ago happened,” Phil McGinniss, leasing agent of the building, said. “We had no idea the tenant was renting out the space. It had nothing to do with daycare use. Once this happened, we immediately moved to terminate the lease and I sent the termination information to Rob. We have spent significant time and money to renovate this space for a daycare and we think it is a good use for the location. We would like to be able to work with another daycare operator, so we would like to see the conditional use remain. However, we will do a much better job of vetting our tenants next time.”