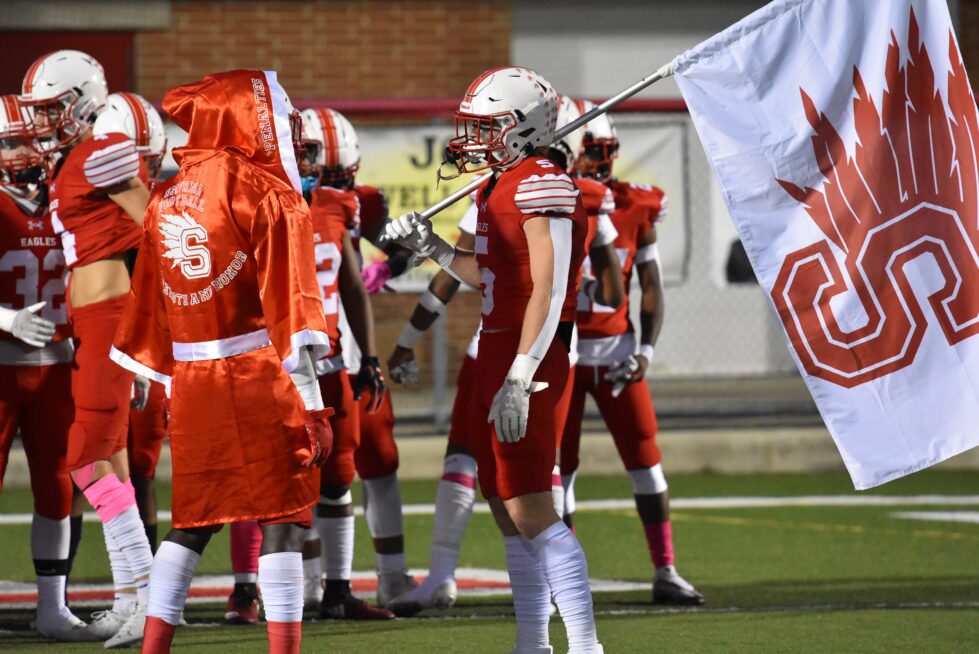 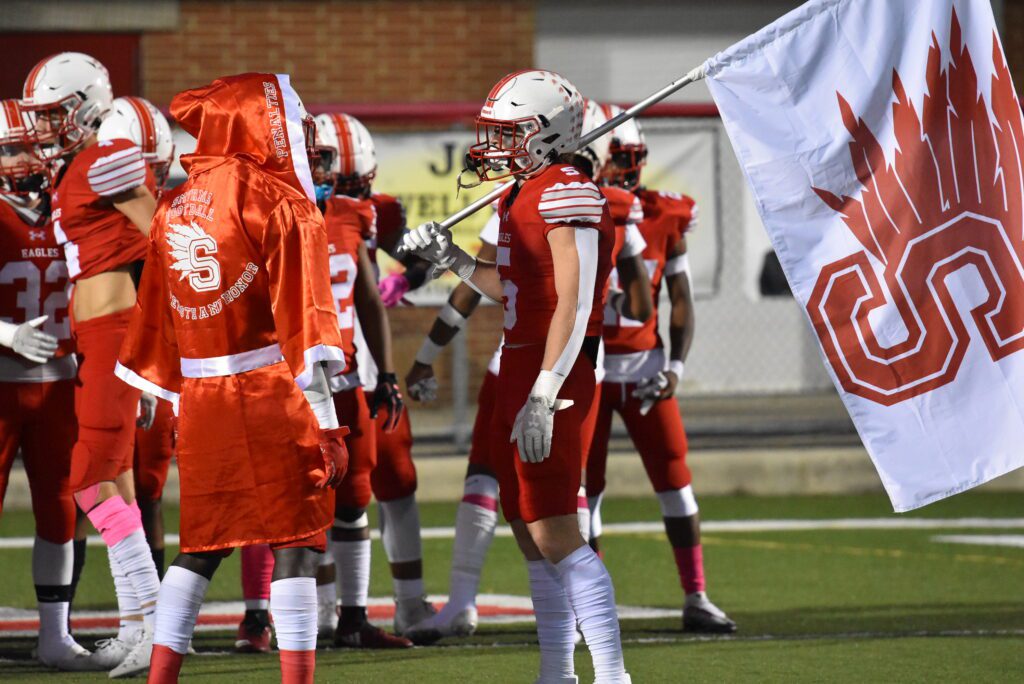 The top ranked Smyrna Eagles had scored over 40 points in five of the last 6 games while the 6th ranked Appoquinimink defense had only allowed an average of 12 points this season, so something had to “give” last night in Middletown…right? Smyrna sent a message by scoring on the first play from scrimmage as quarterback Brian Wright executed a “perfect run-pass option” fake to Markell Hohlman with a pass to Yamir Knight for a 69 yard touchdown. Three minutes later, Hohlman ran for a 21-yard score, and with 5:04 left in the opening quarter, Wright connected with Joshua Gueh for 45 yards to give the Eagles a 22-0 lead.

Things looked bleak for Appo on its Homecoming and senior night, but the Jaguars mounted a comeback led by freshman signal-caller Greg Nielson. Unable to run up the middle with halfback Daniel McConomy, Nielson mixed in effective draw plays of 26 and 28 yards with “Run-DMC”, play-action passes to Dillon Griffith and Noah Hoff as the Jags moved inside the Eagles 10 yard line. Facing a “fourth and five” from the Smyrna nine, Nielson froze the defensive backs with a “shoulder fake” and found Hoff in stride for six points with :09 left in the 1st quarter.

The two defenses tightened up until late in the half. Following a Smyrna turnover-on-downs at the Jags 43, Coach Brian Timpson and his staff dialed up a great play, using “sudden change” after the turnover as Nielson again used a “pump-fake” to connect with Hoff for a 57-yard touchdown. The conversion attempt failed but Appo clearly had “flipped” the momentum, trailing just 22-12 with 3:08 to go. Knowing they would receive the kickoff to start the 3rd quarter, the Jags were hoping to send the game into the locker room within striking distance, but Smyrna had other ideas.

The Eagles had the ball at their 26 after the kick. The 1st play was a pass to Knight for 12 yards and a 1st down. On the next play, Wright flipped the ball to Knight in the flat and “Ya Ya” did the rest as he broke two tackles, and eluded another defender on his way to a 62 yard score that put Smyrna out in front 30-12 at the half. That late score negated the Appo momentum, they had fought so hard to secure.

The Eagles controlled the second half scoring on a 20-yard pass from Wright to Nolan Fretz who out-jumped a defender in the endzone, and a 24 yard strike to Gueh that pushed the Smyrna lead to 46-12 after three quarters. Coach Mike Judy “pulled” his starters at that point, gaining valuable experience for the backups. The scoring was completed when Jesse Dixon threw a pass to freshman Dylan Oakley from seven yards out for the final of 52-12.

The Eagles have won 7 straight to improve to 8-1 with a game against Cape Henlopen next Friday to complete the regular season. Wright ended the game with 349 yards passing and five touchdowns, and was named our First State Ortho Player-of-the-Game. Hohlman gained 153 yards on 12 carries and a score, while Knight added 2 touchdowns and 200 total yards. The Eagles’ balanced attack has now gained over 1,700 yards on the ground in 9 games led by Hohlman with 933. Wright has passed for 1,671.

After being “one dimensional” for most of the year, the Jags have added a passing game to complement Daniel McConomy (over 1,700 rushing yards). Nielson passed for 200 yards and both Appo touchdowns showing poise beyond his years. Unofficially, Smyrna gained over 600 yards while Appo’s offense gained over 320.

The Jaguars had their 3-game winning streak snapped and will finish the regular season next week against Salesianum in a contest that will decide the District 2 title.