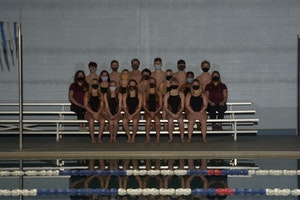 With uncertainty in the air, Milford began to put together its swim team for this past season. One thing that was certain was that the number of athletes would be smaller than usual, adding to what is always considered to be a sport in which sacrifice is paramount. While swimming is an individual sport, it is scored as a team sport as well. The athletes that compete in this sport spend countless, lonely hours honing their strength and stamina, it simply isn’t just a matter of jumping in the pool and letting it all hang out. “The hours upon hours of work that our swimmers put in both in and out of the pool culminated in a very strong season for us,” Coach Kelly Wells said.

With a total of eight boy and 13 girl swimmers, it was a bit of a slow start for Milford, but it kept at it. By the time the Henlopen Championships came around, the Buccaneers would finish sixth in both divisions. More of note however is the number of State Meet qualifiers Milford had, totaling seven. “To be able to come up with a number like that with such a small group is very impressive. It’s a little different this season in that team relays don’t automatically qualify, those swimmers had to earn their spots. I can’t tell you how proud I am of them,” Wells said.

In the Henlopen Championships, Milford would gain two individual medals. Senior Mason Sauers would earn third place in the 50-yard freestyle, also finishing fifth in the 100 free. Freshman Eryn O’Brien earning bronze in the 500-yard free with a third-place finish. It was more than the medals that defined Milford, there were several swimmers that finished just off the podium as well. Senior Allison Benton would finish sixth in the 100 free and fourth in the 100 backstroke. Freshman Carley Mackert also logged a fourth-place finish in the breaststroke. “I was thrilled with how our swimmers performed in the Conference Championships. We had so many swimmers put up personal bests, that’s what you really want to see, swimmers reaching their peak at the end of the season,” said Wells.

Speaking of reaching your peak at the end of the season, Wells wanted to offer a tip of the cap to senior Matt Hague who had never swam at the varsity level before but chose the sport as his winter endeavor. “Matt didn’t come in here just to have something to do, he came here to work. He plays football and lacrosse, as well as wrestling in the past. It would have been so easy for him to just try and stay in shape, but that isn’t him, He got better with every practice, every meet.” Another newcomer was sophomore Sophia Massotti. “Sophia who really never swam before got better as the season went on, I’m really looking forward to coaching her in the future,” Wells stated.

With the current environment, the season was obviously a challenge to pull off. One of the key elements were the parents, who stepped up in a big way. “I can’t begin to tell you how obligated and thankful I am for the support of the parents. Along with my assistant coach Trisha Davis, everyone chipped in to make this season happen. Every time we needed something; someone was always there to help,” Wells said.

With the State Championships coming up this weekend, Milford will be well represented. For the boys, Milford will see Sauers in the 50 and 100 free, joined by senior Bryce Wells in the 100 free as well. The boys will also compete in two relay events – the boys 200 medley and freestyle with Sauers and Wells joined by sophomore Mitchell Graham and junior Jacob Muir. Graham also qualified in the 200 IM and 400 freestyle. The girls 200 medley relay will feature Mackert and Benton, being joined by senior Summer Davis and sophomore Emmerson Lefever. The girls 400 freestyle relay will include O’Brien and Benton who will be joined by senior Emma Sekscinski and Lefever.