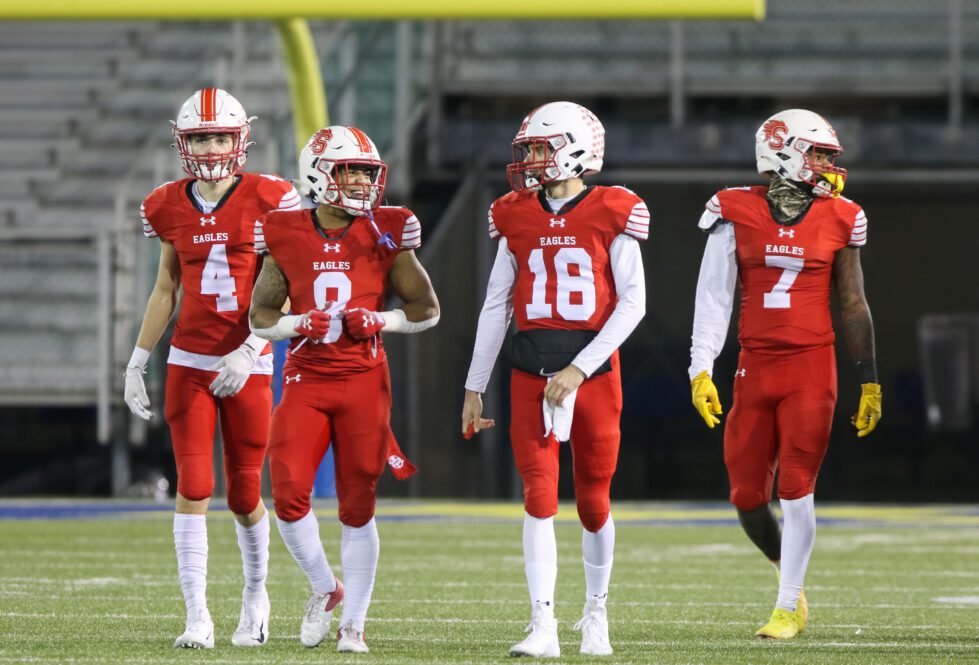 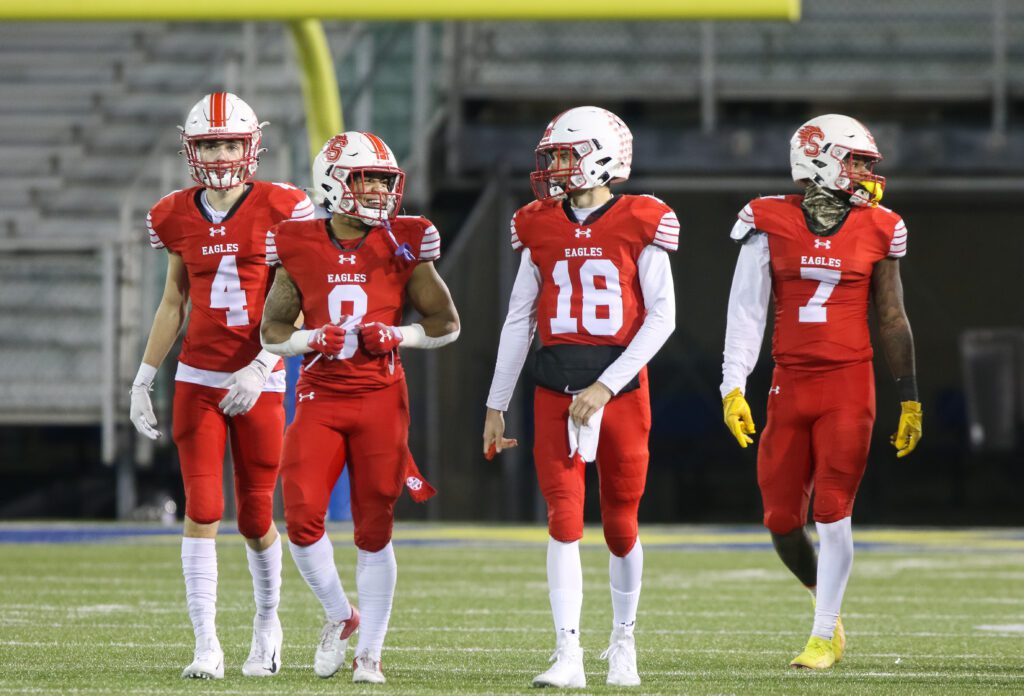 In their semifinal victory two weeks ago, the Smyrna Eagles used multiple offensive sets to feature the run game, only attempting five passes to advance to the championship game. Once they got to Delaware Stadium, it was Brian Wright and the passing attack that propelled the Eagles to the 4th title in school history since 2015. It just goes to show you the versatility of this team that possesses a multitude of weapons. That explosive offense, paired with a relentless defense combined for a 52-7 win over Dover for the Class 3A championship.

Smyrna and Dover finished the 1st quarter in a scoreless tie, but the 2nd quarter would be a harbinger of things to some. Markell Hohlman ran for 30 yards to the Dover 26 on the first play of the second quarter. That would set up the 1st score of the game as Wright found Nolan Fretz open at the two, and he back-peddled into the endzone less than a minute into the quarter. Those two were instrumental in Smyrna’s 2nd touchdown. Following a well-placed kickoff by senior Joshua Michael, Stephen “Truck” Driver tipped the ball to himself at the Dover 33 yard line. It would take the Eagles just 3 plays to get another touchdown as Wright passed 30 yards to Fretz at the Senator 13 and on the next play, Hohlman got the left edge for the TD and a 12-0 lead.

Undaunted, Dover fought back on a 9-play, 56 yard drive featuring three completions from Nahseem Cosme to John Parker, the final pass for 14 yards and a score. Brandon Yoder split the uprights as Dover pulled to within 5 points at 12-7 with 5:00 left in the half. However, five minutes was more than enough for the Eagles to put 2 more touchdowns on the board – an 18-yard “side-arm” pass from Wright to Yamir Knight, and a Knight 2-yard run out of the earthquake with just :14 to go for a Smyrna 28-7 lead at the break. That final score featured an outstanding sideline catch by Fretz as he kept his feet in-bounds for a 21 yard gain as he was falling to the ground. A definite highlight from the Smyrna senior who posted his most productive game of the season.

Dover received the opening kickoff of the 2nd half with a chance to get back into the game, but the Eagles’ Michai Stinnet recovered a fumble at the Senator 33. Wright connected with Fretz and Andre Ashly to start the short drive, then Hohlman caught a 27-yard TD pass from Knight. The conversion run by Knight gave Smyrna a 36-7 lead.

In the 9 years that Mike Judy has been the head coach at Smyrna, one really never hears much about kickers, but senior Joshua Michael was instrumental in this title win. His kickoff following the Hohlman TD, bounced off a Dover player’s helmet right into his arms for the 3rd turnover on kickoffs in the game. That turnover gave the Eagles the ball at the Dover 47 leading to a 9-play drive culminating in a Knight touchdown. The conversion put Smyrna up 44-7 with 6:34 left in the 3rd quarter thus starting a “running clock” for the rest of the game. Hohlman completed the scoring with a short run and Knight passed to Julian Charlescar for the conversion and the 52-7 final. That represented the 2nd most points scored in a DIAA championship game (Hodgson scored 54 in 2019) and the largest margin of victory in the history of the tournament’s title game, dating back to the inception of the playoffs in 1971.

The Smyrna defense limited Dover to 99 yards of total offense as 14 different players were in on tackles led by Brandon West with 9 and 3.5 for loss. Nazir Jenkins was in on 7 tackles, Cole Moyer had 6 and Junior Durnall chipped in with 5. Of Dover’s 99 yards, 60 were pass receptions by sophomore John Parker as he caught all 6 completions thrown by junior quarterback Nahseem Cosme.

The future is bright for coach Chip Knapp as Dover graduates just three starters on offense, and six on defense. Feature running back, Ja-kwon Kilby (1,241 rushing yards) sat out the title game with a leg injury. Hopefully he will recover fully to give the Senators a legitimate chance to get back to Delaware Stadium in 2023.

This year, though, belonged to the Smyrna Eagles. Wright completed 16 of 24 passes for 226 yards and 2 scores. Fretz caught 7 of those passes for 99 yards and a touchdown. Hohlman gained 113 yards on 14 carries and scored twice on the ground and once on a pass. Then there was Yamir Knight, the final of four brothers that graced the field for Smyrna from 2012-2022. Knight caught a TD pass, scored twice on the ground and passed for a TD. He, along with brothers Wade, Will and Wayne  scored a combined 226 touchdowns, totaled 16,433 yards and scored 1,788 points.

Dover finished the season 8-5 overall, while Smyrna will carry an 11-game winning streak into the ’23 season. The Senators were playing in the 4th championship game in program history (1977, 1988, 2001 and ’22) each under a different head coach. Smyrna was in the title game for the 6th time, all but one under head coach Mike Judy who secured his 80th victory in his 9th season.

It was an entertaining championship Saturday at “the TUB”, featuring an overtime Unified game, a close rematch in class 1A, the historic performance in 3A, and to cap off the night an outstanding defensive battle in class 2A. A fitting end to a great season.