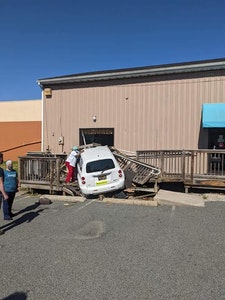 According to Sergeant Robert Masten of the Milford Police Department, a 75-year old woman pulled from a parking space on Causey Avenue on April 13 around 4:00 PM and struck a vehicle. For an unknown reason, the vehicle, a 2009 Chevrolet, continued across the roadway and into the building which houses Salon M, a hair salon owned by Megan Cagle who also provides space to Tom Smith’s Norman’s Deluxe Barber Shop and Shave Parlor.

“No injuries were reported and the woman, who is from Milford, was issued a summons for inattentive driving,” Sgt. Masten said.

Smith, who was finishing up his day at the barber shop on the second floor, explained that the building suffered some structural damage to the jack stud to the left of the window where the car entered the building and Cagle, whose shop is located on the first floor, stated that the accident broke the sewer line. 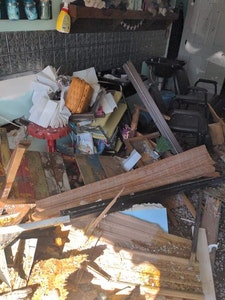 “Some plumbing damage, some furniture and the handicap ramp suffered damage,” Smith said. “The Restoration Guys had staff on site assessing the damage before the tow truck even arrived. They made quick work of cleaning up inside and securing the building for the evening.”

Cagle is still talking to the insurance company and is not sure what the monetary damage will be. Because of the broken sewer line, the salon cannot open. Once it is repaired, she has been told they can return to work. 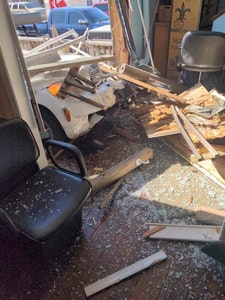 “I have been extremely fortunate as I have been offered a temporary place to work by Phil and Phillip Michael Ruiz at Delaware Barber Company next door,” Smith said. “I cannot thank these guys enough and how much this means to me as I am currently booked out until the second week of June and any downtime creates a scheduling nightmare. They are incredible neighbors.”