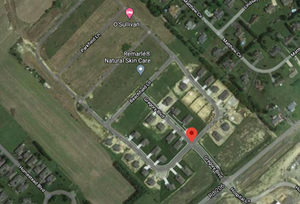 Several homeowners in the West Shores development across from the new hospital are dealing with Certificate of Occupancy issues. The problem is related to drainage ponds that are not properly installed causing flooding issues in the development.

“The developer is responsible for ensuring compliance with the sediment and stormwater plan and National Pollutant Discharge Elimination System permit criteria,” a letter sent to residents from Jessica L. Watson, Program Manager for the Sussex Conservation District, read. “SCD communicated to the developer that the three infiltration basins that provide stormwater management for the development were not functioning as designed and causing water to back up into the community. The developer, under the guidance of a geotechnical engineer, has attempted to revitalize the infiltration; however, they have been unsuccessful to date. We have discussed with the developer that if the ponds continue to not function as designed, a plan revision may be needed to adequately manage stormwater. SCD has communicated with all pertinent parties, including DR Horton, City of Milford and DNREC regarding the site challenges.”

The letter continues, explaining that SCD is concerned about issuing the final Certificates of Occupancy, explaining that if they were issued, the responsibility of the stormwater ponds falls to the Homeowners Association (HOA) in West Shores, a cost that would be passed on to the owners of the homes in the development. It also stated that there is a financial guarantee, or bond, for the developer to implement an approved sediment and stormwater plan. The bond held will not cover the cost beyond a plan that is already approved, and it was decided that a withholding of Certificates of Occupancy was necessary to force the developer to repair the ponds.

This has come as surprising news for those with contracts on homes in West Shore.

“We were told that the city was holding or CFOs until the developer responds to the demands set in place which were to obviously fix the three dry ponds,” Caitie Depelteau said. “This included the three additional options, one of which is changing it to a fountain like what they have in Hearthstone Manor and two other options that we were not privileged to know or to increase the bond which is currently at $150,000.”

According to Depelteau, the last nine properties were sold by D.R. Horton, the builder and if they CFOs were issued, the builder would have no incentive to push the developer to do the right thing.

“We were loosely explained that the ponds were being worked on, but that it wasn’t going to be a problem and would be quickly fixed,” Depelteau said. “This conversation was in November. We have never heard from the developer, William B. Luther of RB Landing Holdings, LP. As far as D.R. Horton, we have been in contact with our sales representative many times. She has been kind and understanding as well as keeping us up to date as much as possible.”

Depelteau also said that there has been a push to create an HOA, effective May 5. If that happens, the HOA is willing to take responsibility for the dry ponds as well as finishing the pavement of the roads.

“After a non-official community meeting on April 24, where we gathered to discuss the HOA and dry ponds issue and hearing the complaints and unhappiness of the community members that have already lived there for several years, my husband and I pulled our contract and will no longer be living in West Shores. We have decided to look into established homes elsewhere.”

Milford Live has been unable to contact the developer, but D.R. Horton sent a statement about the issue.

“D.R. Horton began purchasing lots in West Shores from a third-party developer, RB Land Holding, LP, in July of 2017,” Bethany L. Carle stated. “We have since built all 112 homes that were planned and have 10 more remaining to close. D.R. Horton looks forward to delivering these homes to our customers when the developer satisfies the issues identified by the County. These issues are the sole responsibility of the developer, as we have no authority to work on land, such as the opens spaces and ponds, that we do not own.”