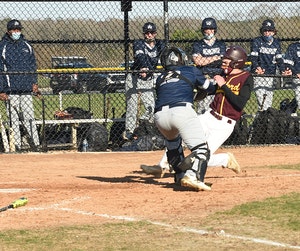 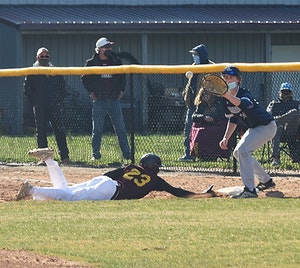 Coming into this season, Milford baseball coach Nick Brannan had lots of questions he was looking for answers to. Following Monday’s game against Sussex Academy, Brannan is still looking for answers. Although Milford would emerge victorious with an 8-2 victory, the energy and commitment was missing more times than Brannan would have liked. “We really didn’t play our best tonight (Monday), we honestly haven’t played our best yet this season. However, we were expecting this, and we know that in time it will come, we simply have to up our energy level and I think we will be fine. But this season is going to go by fast, so there really isn’t much time to lose.”

The key to any baseball team is pitching, and that is what Brannan has been looking at early in the season. Against Sussex Academy however, Brannan took it to a new level. The plan from the start was to get his young arms an inning each. So, starting with the first inning, it was pretty much one and done as the innings passed by. Senior Alex Mergner would start the game, with a clean opening frame and a pair of strikeouts. Eighth grader Joshua Miller pitched a clean second, followed by freshman John Hudson who did not allow any runs either. 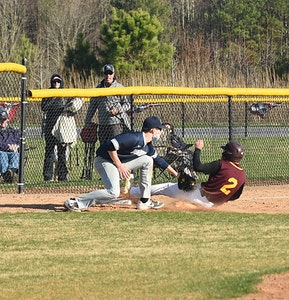 On the offensive side Milford was buoyed by a two-run homer over the left-center field fence in the top of the second inning. It looked like the Buccaneers might explode on offense, but again just didn’t seem to get the big hit when they needed it. Prior to Milford’s turn at the plate prior to the fourth inning, Brannan brought his team together, imploring them to pick up the energy. The Buccaneers responded by putting up a four spot and extending the lead to 6-0. “That fourth inning, that is how we want to play. We want to be aggressive on the base paths and take advantage when good situations present themselves,” he said.

Sussex Academy would respond in the bottom of the frame, as Wyatt Skinner bounced a two-run dinger off the scoreboard in left field. The well-hit ball seemed to embolden the Seahawks as they kept a careful eye on the strike zone and put together a threatening rally. Before Milford knew what was happening, the bases were loaded and there was only one out. That was when Brannan turned to sophomore righthander Nick Hurd. The underclassman responded by pitching out of the jam and going on to shut down the Seahawks in the fifth inning as well. “Nick really brings a different element to the game, with the angle of his delivery. It tends to keep hitters a little off stride. More importantly, that was a young pitcher in a big spot, that’s how guys are going to earn innings this year,” Brannan stated.

Junior Mason Morris also homered in the game, as well as pitching the final inning. Although it wasn’t the smoothest Morris can look on the hill, he buckled down and got the job done to finish out the game for the Buccaneers, walking three and striking out two without allowing any runs. “Mason dug in and showed heart. That’s how you can see what players are really about, he may not have had his best control, but he got the job done. At the end of the day, that’s all you can ask,” Brannan said.

In the season opener against Cape Henlopen, Milford was never really in the game as it came out on the short end of a 13-2 score. The Buccaneers would right the ship however, as they hosted Smyrna on Friday. Even though they fell into an early four-run hole to start the game, the pitching and defense settled down to allow Milford to slowly work its way back into the game. With Milford working deep into counts, it not only scored runs, but got the pitch count up on the Eagles hurlers. “Once we got deeper into their bullpen, we got more comfortable and knew it was just a matter of time,” Brannan said. Milford scored a combined 12 runs in the fourth, fifth and six innings to secure the 14-8 victory.

Up next for Milford will be a home tilt against Sussex Central, followed by the annual “Battle of The Bat” at Lake Forest Friday afternoon “We have some really good teams coming up this week and we are going to have to up our game if we hope to compete,” Brannan concluded.