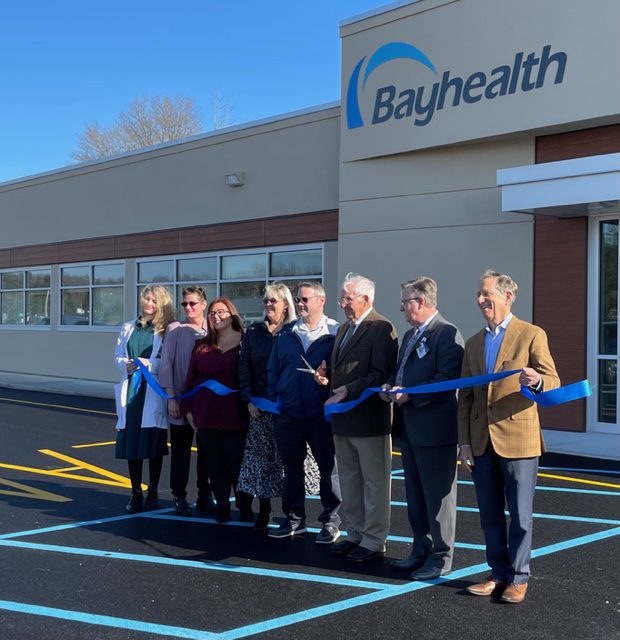 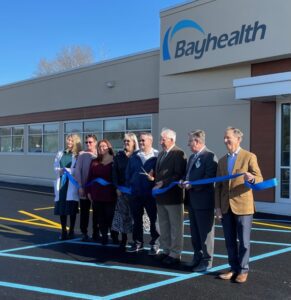 Bayhealth honored Dr. Vincent Lobo, a physician who recently retired after 57 years in practice, with a. ribbon cutting of their new primary care facility located at 16681 South Dupont Highway in Harrington. The new facility will offer both primary care and outpatient services. Terry Murphy, President and CEO of Bayhealth, began by asking if those in attendance had ever watched “It’s a Wonderful Life.”

“This facility is actually going to bring a lot of lasting benefit to the Harrington community. It will bring access to top quality care, more access for people that need access to primary care. So this will be very important to the residents in the surrounding community,” Murphy said. “It’s long overdue, and we couldn’t be more proud. And part of what makes this building so special brings me back to my question, really related to a guy named George Bailey. And if you remember the story, which you probably watched 12 times in December, George Bailey would try and think about what his life would be like without George Bailey. And that’s kind of what I think about when I think about Dr. Vincent Lobo, the impact on many people, professionals, other physicians, other caregivers, the community people he’s taken care of for 56 years in this community. It runs so deep and so we’re also recognizing Dr. Lobo today. He has impacted the community. It’s a very big deal. And if you just think about it, without Dr. Lobo, we wouldn’t be here today. So I do appreciate Dr. Lobo, your presence in this community.” 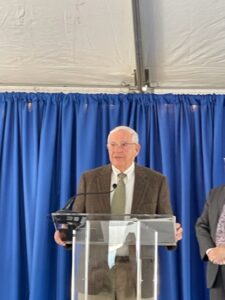 Dr. Vincent Lobo thanks Bayhealth for the recognition at their new facility

Dr. Gary Spiegelman, Chief Medical Officer at Bayhealth, pointed out that the community could not have predicted a pandemic going into its third year, but that it had emphasized the need for healthcare services in southern Delaware. The organization implemented a graduate education system in an effort to address the shortage of physicians in the area and explained that Dr. Lobo was instrumental in helping that come to fruition. A video played during the ceremony included patients and co-workers of Dr. Lobo whose lives he had impacted.

“I was getting these backaches and after about five days of them, my wife told me I had to go see Dr. Lobo because she could not sleep since I was tossing and turning,” Buck Cahall said. “So, I went to see Dr. Lobo and he checked me out, gave me an EKG, took my blood pressure which I guess was okay. Then he said “I want you to go up to the hospital and tell them to do a full cardiac workup. He pulled out a pad and wrote something down. So, we went up there. A doctor there felt I needed stress test, so I spent the night in the hospital and had a stress test the next day.”

According to Cahall, the stress test revealed he had a 95 percent blockage in the “widowmaker,” which meant had Cahall over exerted himself, he could have suffered a fatal heart attack. He pointed out that he was alive to day because Dr. Lobo knew him and knew something was wrong. The doctor didn’t just brush him off and tell him to take it easy, but sent him for care that saved Cahall’s life. Michele Devins recalled at time when a patient suffering from back pain for several months came to see Dr. Lobo after undergoing physical therapy that had not relieved her pain.

“He came in early, like between 7:00 and 7:30 in the morning,” Devins said. “He did some manipulation on her and she got up and walked away from the table. She just walked out the door and she had been struggling forever. He came in on his own personal time to help treat the patient.”

Inside the primary care building, a plaque recognizing Lobo’s long service to the community, stating that the plaque will let patients know of Lobo’s dedication long after he is gone. He also pointed out that Lobo reminded him of another famous physician.

“Much has been said about Dr. Lobo. He and I have only met a few times but, and this will date me as well as him, but he looks a little bit like Marcus Welby MD. The difference is that was a fictional character and Dr. Lobo has been a real person serving these communities for more than 50 years. And that’s a big difference,” Spiegelman said. “We idolize physicians sometimes, especially in the days of Dr. Marcus Welby, MD on TV. But Buck’s story was one story of someone whose life was saved by Dr. Lobo and multiply that by hundreds, maybe thousands of times, looking at all the patients he served but not just saving their lives, but those who he simply treated and helped make their health better, prolonging their life, enhancing the quality of their life. And you can’t say enough in my opinion about what that means. And so, we thank you Dr. Lobo, we do in fact dedicate this building in your honor. And we are grateful for all your years of service as well as your wife and all those who sacrificed with you to serve these communities over these long years.”

Lobo was grateful for the recognition. Cahall remembered that when he began seeing Dr. Lobo, there was a waiting room with a few chairs and a stairwell with people sitting on the stairs waiting to be seen. When Lobo began his practice, he was one of only three doctors in the area and two of them left not long after he began, leaving him as the only general practice physician for thousands of patients.

“Thank you so much, everybody. I really enjoy this honor,” Lobo said. “We were talking about how long I was in practice. We are talking about transition I lived upstairs. My office was downstairs. And we only had four seats and the stairs to sit on. And we were busy. We made house calls. Nursing homes, we have three in the area that I helped with in Harrington. I worked long hours, of course, being the only physician between Milford, Dover and Bridgeville. I was very busy, but I enjoyed every bit of it. Every transition from where we started to the office where we are now on Shaw Avenue. And now we’ve grown to this and now we have this beautiful facility. Bayhealth has really been wonderful to the community and definitely wonderful to me. I really appreciate everything that Bayhealth has done for me and this recognition is more than I expected. And thank you so much and thank you all, especially my patients who are now my friends with us here today.”

Representative Shannon Morris read a proclamation from the Delaware House of Representatives recognizing Lobo. He joked during his comments that he was glad Lobo saved the life of Cahall as he taught Representative Morris driver’s education.

“I’ve known Dr. Lobo for many years. He’s known me longer than I’ve known him, honestly. My grandparents were probably one of his first patients and then my mother. He was her doctor for over 54 years, and she spoke very highly of him,” Representative Morris said. “When I said I was coming down here today, she said he makes sure to tell you how much she loved you. Talking about the old office, I remember as a kid going over there with the knotty pine walls and the staircase with the railing. Back then, we didn’t have iPads to keep us occupied. I guess I’m pretty sure I was chewing on the banisters and running up and down the stairs and driving all the patients crazy over there. But I’m honored to be able to give you this tribute on behalf of the House of Representatives for everything you’ve done for the community. My family and pretty much probably everybody’s family here has had some contact with you.”

The proclamation pointed out that Lobo was also the doctor for the late Governor Ruth Ann Minner and provided additional details of Lobo’s service, including serving on the Harrington Town Council as Mayor, Vice Mayor and Police Commissioner. Lobo was also Police Commissioner in Fenwick Island. Senator Dave Wilson remembered a time when he called Lobo about a health issue and Lobo told him to “stop in around 7:30 in the morning when I’ll be feeding the cats,” stating that this demonstrated the compassion Lobo had for his community.

The new facility is scheduled to be open for patients on Tuesday, January 24.