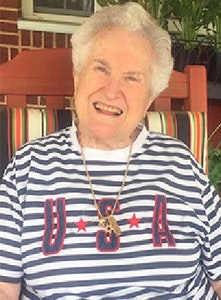 Rhoda Friedman passes away at 88

Rhoda Friedman, the artist responsible for painting Milford’s fire hydrants during the 1976 Bicentennial celebration, passed away on Jan. 4, 2021 at the age of 88. Friedman painted six fire hydrants on her own as a way to celebrate the 200th anniversary of the signing of the Declaration of Independence.

“At 88, our mother lived a full life,” her daughter, Jessica, said. “She was always eager for the next adventure. Her warm smile was contagious. She enjoyed sharing and being with others. Mom had a love for the arts and being creative. She enjoyed museums, theatre, dance and music, especially an orchestra. She played piano and loved to sing. The past years we have shared singing the golden oldies as I played my ukulele.”

Friedman was born in Milford, Massachusetts in 1932 to parents who immigrated from Russia. She grew up in the Boston area, studying drawing and painting as well as piano. Friedman was influenced by the masters displayed at the Boston Museum of Fine Arts. She graduated from the Rhode Island School of Design with a degree in fashion design and began working in the garment district of New York City until she married her husband, David Friedman. The couple moved to Milford, Delaware, in 1957.

According to her daughter, Friedman loved children and, after moving to Milford, she returned to school, earning a degree in education. She began her career as a first-grade teacher in Milford.

“Her artistic talents came in handy while she was a first-grade teacher,” Jessica said. “She taught and shared her love for little ones for 15 years, including her appreciation of art, music, puppetry, theatre, dance and poetry. She even taught them conversational French. Her favorite thing about teaching was the children.” 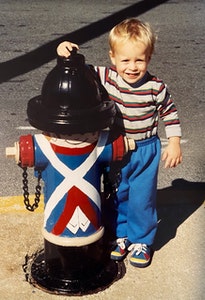 Friedman’s grandson, Colin Mick, stands with one of her painted fire hydrants

Milford established a bicentennial committee in order to create events that would celebrate the 200th anniversary of the signing of the Declaration of Independence throughout 1776. The celebration began on Sept. 20, 1975 with a parade to kick off the year-long celebration. Additional celebrations included Memorial Day observances on the Milford Plaza, a community picnic on the grounds of the Parson Thorne Mansion, a downtown square dance, a special art exhibit at Shawnee Country Club and a Mayor’s Prayer Breakfast on September 18, 1776, which closed the celebration. Friedman used her artistic talents to provide Milfordians with a long-lasting remembrance of the celebration.

“Mom single-handedly painted a set of approximately six fire hydrants in downtown Milford,” Jessica said. “She wanted to contribute something special to the people of Milford.” The painted fire hydrants remained visible for many years after the bicentennial celebration ended.

After retiring as a teacher, Friedman traveled throughout the United States and the world, visiting China, Russia, England, Scotland, Portugal, France, Fiji and more. She was an accomplished photographer with a knack for catching the perfect moment. Friedman’s specialty was people and she compiled presentations that she shared for family, friends and the community. She would show her collection of photographs at home, at the library, in classrooms and for organizations like the Ashland Nature Center. When she presented her photographs, she often wore authentic clothing. Friedman displayed her work at the Milford Library and the Milford Art League. She was also the photographer for the first Bud and Bug Festival. Friedman also enjoyed painting, starting with oils on canvas.

“Say a prayer, visit a loved one, be well in each of your lives,” her obituary read. “In lieu of flowers, the family asks that a donation be made in her name to the Milford Library, First State Animal Center and SPCA or Alzheimer’s Association.”