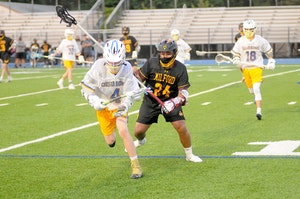 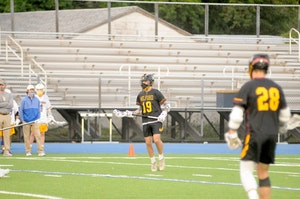 The Bucs were right where they wanted to be at the halftime break.

After falling behind quickly in the first quarter, including four straight goals from Caesar Rodney High in the first few minutes and a 6-2 deficit heading into the second quarter, Milford High fought back and stayed in the game. 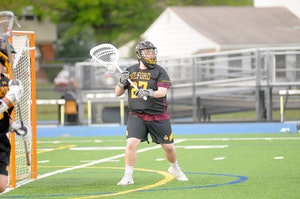 Unfortunately, the Riders’ offensive attack proved too much in the second half as Caesar Rodney pulled away with the 17-8 division win Thursday, May 6. The loss dropped the Bucs to 3-10, while improving CR’s record to 8-4 and snapping a three-game losing streak. 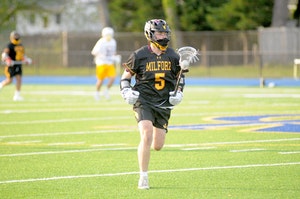 Senior Landan Hajek scored five of Milford’s eight goals on the night and added an assist, while senior Matt Hague recorded the other three goals for a hat trick. Freshman Kolin Thompson recorded an assist in the loss.

Ever since the Bucs pulled off a decisive 21-1 Henlopen North victory over Sussex Central High on April 21, Milford has lost four straight games. Two of those games came by just three goals, as Caravel Academy snuck out an 11-8 win on April 26 and Dover High came away with a 13-10 division win April 28.

As a team, the Bucs have accumulated 123 goals in 13 games, led by a team-high 35 from Hajek. Hague has added 27 goals of his own, while senior Troy Donavon and junior Shane Sylvester have added 15 and 13 goals, respectively. In total, 13 Bucs have scored goals throughout the season.

Senior faceoff player Bryce Wells has scored five goals, but also missed a good portion of the season after being injured against Indian River at the end of March. He returned to action with a hat trick against Sussex Central a couple weeks later.

Senior goalkeeper Brody McMillan has been impressive in front of the net, making a season-high 20 saves on 38 shots in a 14-13 loss to Indian River High early in the season. He also made 18 saves against defending champion Cape Henlopen High on April 14 and 17 against Caravel Academy April 26. 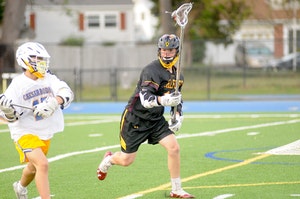 The senior class, made up of Hajek, Hague, Wells, Donavon, McMillan, Corey Messick, Rafael Mejia, Cannon Cline and Mason Thompson, is looking to finish the season strong with two last nonconference home games against St. Andrew’s School (May 11 at 7 p.m.) and Sanford School (May 13 at 6 p.m.).