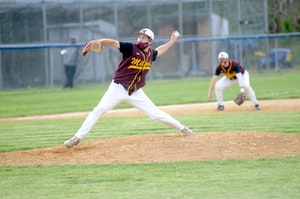 State tournament season is quickly approaching, with Friday, May 15 being the last day for regular season competition and Tuesday, May 18 marking the first round of the DIAA baseball state tourney.

Following a tough 4-2 loss to Tower Hill High on Saturday, the Milford High baseball squad is looking to get back on track with just two games remaining in the regular season.

Two of those five losses were by just one run, with two other losses coming by three runs or less.

“We lost on a walkoff to a pretty good Middletown team, at the time we played Sussex Tech they were the No. 2 team in the state and then we followed that up against a top five team in Sussex Central,” coach Nick Brannan, who earned his 100th career victory with a 9-2 win over St. Elizabeth High on May 1, said regarding Milford’s tough stretch. “Any time you play Dover, Dover is Dover, whether their record says it or not. They’ve always got a lot of talented kids. Against Dover, they got timely hits, we had runners in scoring position multiple times and we just came up short.”

Trailing 2-0 in the bottom of the third to Tower Hill, Milford scored runs in the top of the fourth and fifth innings to knot the score 2-2 Saturday afternoon. It was an Aydin Zimmerman RBI single in the fourth and a Mitch Leighty fielder’s choice to score Alex Mergner in the fifth that put a pair of Milford runs on the board.

The Hillers regained the lead in the bottom of the fifth on an RBI double by Jack Zungailia. Zungailia came around to score on an error two at bats later to cap the scoring at 4-2.

Junior Shawn Saxon and senior Dale Ostermann combined to strike out seven batters and surrendered just seven hits and two earned runs in the loss, while junior Trent Lofland recorded two of the team’s four hits. Zimmerman and Ostermann had one hit each.

Tower Hill’s win improved their season record to 12-1, while Milford’s next two opponents Delmar High (10-4) and St. George’s Tech (14-2) also have winning records. The three teams combine for an overall record of 36-7 this season, making it a difficult stretch to end the season for the Bucs, but Brannan is grateful for the opportunity to test his team heading into the postseason.

“In the way we’ve tried to frame it for our team, you get three free playoff games before the playoffs even start,” Brannan said prior to Milford’s showdown with Tower Hill. “We get to go ahead and head into an uncertain field — because honestly who’s going to be in the top 16 seeds and who’s going to be playing on the play-in day — so we get to go in playing better teams, record-wise … I’m grateful to play good teams before the playoffs as opposed to playing teams with losing records, because we’re going to get a better look and we’ll be prepared for it.”

With last season wiped out due to the COVID-19 outbreak, the Bucs are coming off a 2019 season that saw the team finish 16-2 and make the program’s first state tourney appearance since the 2017 campaign.

Led by a strong group of seniors — Mergner, Leighty, Ostermann, James Stangl, Sam Sickles and Mason Sauers — the Bucs will be seeking the program’s first state tourney win since a 4-3 victory over Tower Hill on May 21, 2013 when the tourney kicks off next week.