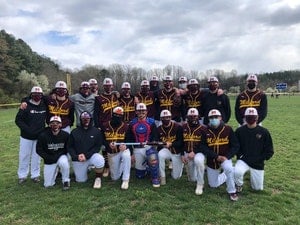 When a big hit was needed, Aydin Zimmerman was there to deliver it. Again and again.

The Milford High junior registered four hits and drove in a game-high five runs to lead the Buccaneers to a 12-8 victory in the annual Battle of the Bat rivalry against Lake Forest High on Friday, April 2.

He also took the mound in the seventh inning to record the last three outs and pick up the save.

“This is a rivalry game so you don’t have to worry about the energy or anything like that,” said Milford coach Nick Brannan. “But with the weather, the time of the day, you worry that those could be factors, but we weathered the storm early and we were able to play our game so we’re happy with that.”

With the 2020 season completely wiped out due to the Coronavirus pandemic, this marked the first time these two squads faced off since April 4, 2019. The Bucs also won that meeting, 10-2. 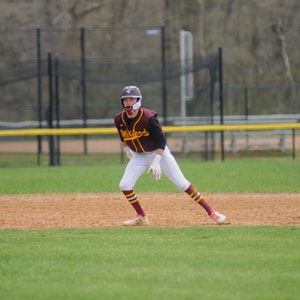 After dropping the first game of the season, 13-2 to Cape Henlopen High, the Bucs have now rattled off three consecutive wins to put up a 3-1 record through the first two weeks of the season.

Zimmerman’s two-run double in the top of the third inning got the scoring started for Milford. Two at bats later he came around to score on a single by junior Shawn Saxon, knotting the game 3-3.

An inning later he stepped up with another timely hit to break up the tie score, driving in three runs on a bases-clearing double to give his team the 6-3 lead and the Bucs never looked back from there.

Starting pitcher Alex Mergner pitched 4.0 innings, striking out a game-high eight batters to earn the win. After a rough first inning, in which the senior surrendered three runs, Mergner settled in and started to get into a rhythm.

“I think in the beginning it took a little bit of time, but we finally got woken up a little bit,” said Mergner. “A 12 p.m. start is a little different, but once we came alive we really came alive and we came out on top, which was the end goal … I thought our team really swung the bat well. Everyone came through and we executed and got the job done.”

Ostermann also collected a pair of hits, drove in one run and scored another two runs. Senior Mitch Leighty registered three hits, one RBI and two runs, while the junior Saxon collected two hits and an RBI. Junior Mason Morris, senior James Stangl and Mergner each recorded one hit to give Milford’s offense 14 hits on the day.

“Alex, I’ll tell you, he came out, settled in and really started to get a good feel on his pitches,” Brannan said. “Getting Aydin to pace the offense, with Mason Morris, Mitch Leighty, it all starts with them … Aydin can’t do what he did today without those guys in front of him getting on base, so it was a real good team performance.”

Chase Killen registered two of Lake’s four hits on the day, with Leighton Webb and Howard Gannon collecting one each. 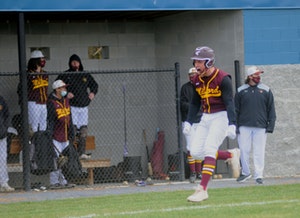 Tristian McCray started the game on the mound for Lake, tossing 3.2 innings and striking out four batters. John Mudri and Gannon combined for 3.1 innings of relief.

The Bucs used a four-run fourth inning and plated another run in the fifth to jump ahead 8-3 before Lake Forest plated three runs in the bottom of the fifth inning to pull back to within two runs.

An Ostermann RBI double and Leighty RBI single in the sixth pushed Milford’s lead to 10-6.

Lake Forest plated another two runs in the bottom half of the inning behind Killen’s RBI double and a Gabe Martin groundout that scored Shane Johnson to pull to within 10-8. 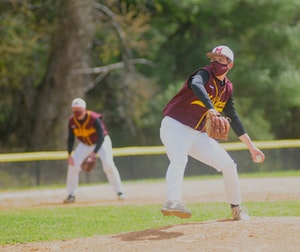 Milford’s two insurance runs in the top of the seventh capped the scoring and put the finishing touches on Milford’s come-from-behind win.

The four-run win wasn’t the first time Milford fell behind early and had to battle back this season. In a 14-8 victory over Henlopen North foe Smyrna High March 26, the Eagles plated four runs in the top of the first inning before the Bucs settled in and slowly clawed its way back. They tied the game 5-5 in the fourth and then used a seven-run sixth inning to catapult to the victory.

“They’re confident in their approach,” said Brannan. “We don’t go up there without a plan … our plan is to kind of hunt the pitch we’re looking for, situational baseball, and the good thing is these guys have some guts. There’s some resiliency in them and we’re able to relax and let the game settle and not get too emotional.” 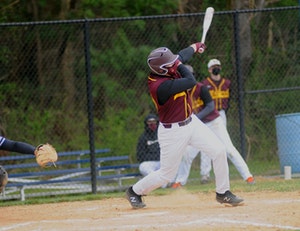 The Bucs will turn around to prepare for a pair of home games this week, hosting Archmere Academy at noon on Tuesday and Laurel High at 4:15 on Thursday. Lake Forest (2-2) visits Cape Henlopen at 4:15 this Thursday.