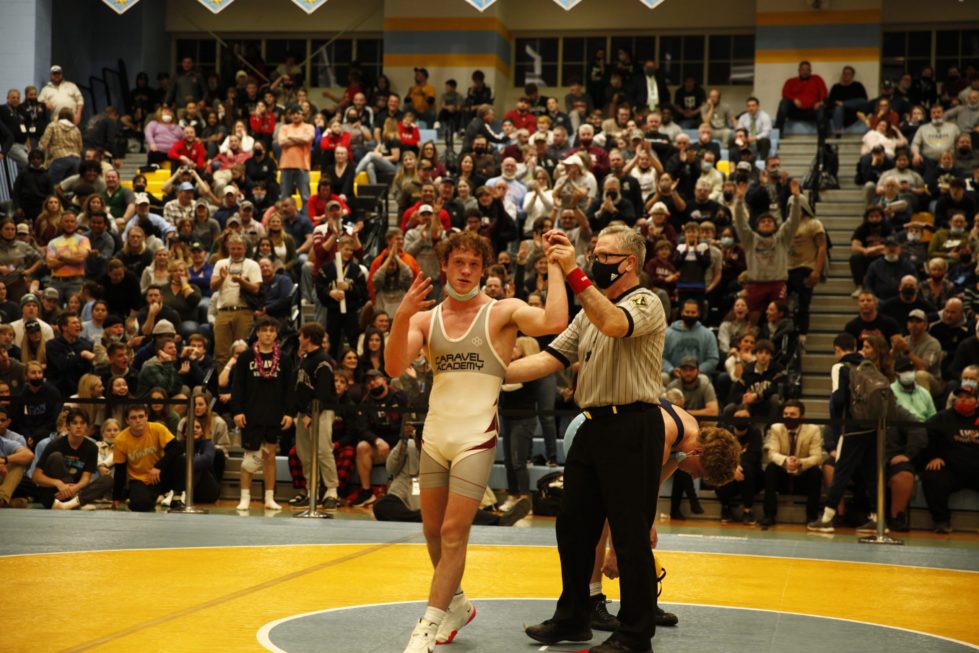 LEWES — For only the second time since 1992, a tournament champion was recognized at the DIAA Individual Wrestling State Championships.

The Bucs five titles was the most among all of the other teams and included four repeat champions. Freshman Eddie Radecki won the first title for Caravel, winning the 113 pound crown with an 8-1 decision over Julian Rapuano of Delcastle. It was Radecki’s second state championship.

Luke Poore won his third state championship at 126 pounds for the Bucs with an 11-0 major decision over Brandon Carr of Archmere.

“I had this goal since I first started wrestling, it was always to be a four time high school state champ and it feels good to finally get it done and move onto the next level,” Poore said.

Nick Hall capped off the Caravel run, winning his third state title with an 11-4 decision over Cape Henlopen’s Carson Kammerer.

Cape Henlopen crowned a pair of champions as Mikey Frederick won the 145 pound title with an 18-6 major decision over Jack Duffy of Tower Hill. The Vikings second champ came at 285 pounds when Lucas Ruppert won a 3-2 triple overtime victory over T.J. Burke of Indian River.

For the first time in history two wrestlers won their fourth state title in the same year. Smyrna’s Gabe Giampietro shared that historical moment with Alex Poore on Saturday night. Giampietro won the 120 pound weight class with a pin over Milford’s Trevor Copes in 2:27.

Sussex Central crowned a champion as Malachi Stratton won a 12-4 major decision over Alex McEvoy of Caesar Rodney. Stratton follows his brother Rashad who was a two time state champion for the Golden Knights.

Jack Thode of Milford won his third state title at 132 pounds, pinning Caravel Academy’s Dylan Knight in 2:51. It was the third time the two met in the state finals match. Daniel Sinclair of Wm. Penn was a runner-up last year, but this year won his first title winning a 4-2 decision over Aaron Briscoe of Milford at 138 pounds.

Four time state finalist Justin Griffith of Sanford won his second state title in the night’s most anticipated finals match. Griffith scored a takedown in the closing seconds of the match for a 3-1 decision over defending state champion Josh Negron of Sussex Central. It was the finals’ only match up between two defending champions.

The attendance for this year’s state championship was record setting as well. All three sessions were sold out and fans had to be turned away.