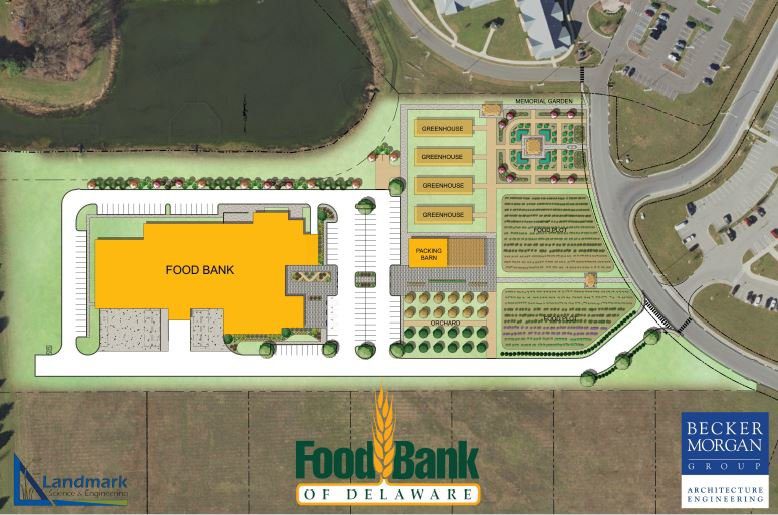 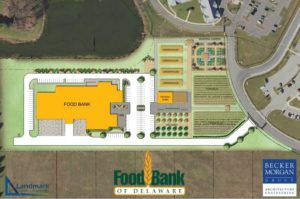 Milford City Council recently approved waiver requests from the Food Bank of Delaware related to the new building they are constructing in the Milford business park off of Airport Road. One waiver, totaling $106,000, did not require council approval, but two others totaling $249,000 required approval not only from council but from Carlisle Fire Company as well.

“The first waivers they are requesting are water and sewer impact fees, which are administratively allowed to be waived based on city code,” City Planner Rob Pierce said. “Council had adopted some economic development incentive programs that gave staff the authority to execute them without having to bring them back in front of council every time. The other two waivers were from the Police Enhancement Fund which is 0.75 percent of the construction cost which we anticipate being around $24 to $25 million. The last request was to waive the 0.25 percent Carlisle Fire Company Enhancement Fund that we pass through to the fire company for capital improvements.”

Pierce explained that the waiver for the Police Enhancement Fund would total around $187,000 while the Carlisle Enhancement Fund would be around $62,000.  Pierce stated that it may be better to table the Carlisle Fire Company request until the company approved the waiver as it could impact their funding in the future. Mark Whitfield, City Manager, also pointed out that building permit numbers are down this year so there is some concern that the city will need to take out more bonds for the new police station. Finance Director Lou Vitola stated that the city had hoped to have a $1 million in the fund before going out to get permanent financing, but the curve had flattened with construction over the past year.

“With our non-profit status and desire to make sure that we can put as much money as we can into our mission of feeding people, we wanted to be sure we didn’t leave any stone unturned,” Chad Robinson, Director of External Affairs for the Food Bank of Delaware, said. “If you’ve been by Delaware Veteran’s Boulevard of late, you certainly see the project is moving right along. Footers have gone in; I believe the elevator shaft and the beginning of three stairs have begun. For us, this is just a way to be sure we are making the best use of the money we raise.”

Robinson explained that the Food Bank had sent a request to Carlisle Fire Company regarding the waiver for their funding but had not received any response. Councilman Jason James asked about other waivers the Food Bank had received, expressing some concern about the Police Enhancement Fund shortfall.

“We fell short on what we were expecting, and we based the referendum on a tax increase that we asked the citizen’s for based on all those parameters,” Councilman James said. “I just want to be sure council has that in mind when you’re considering your vote.”

Councilman Todd Culotta pointed out that the land was purchased from the city at current appraised value.

“So, there have not been incentives up to this point,” Councilman Culotta said. “Anytime you put in a sink or a toilet, whatever it might be in a commercial facility, you pay what’s called an impact fee. And that’s mostly the case of any municipality, the state, whatever it may be. It’s just essentially a cost to contribute to the fact that they can get you water, sewer, whatever. Personally, I would like to wait to see what Carlisle says. The police fee is relatively new, it’s only been like two years. I think it is important to support the Food Bank when they come to us.”

Whitfield pointed out that the water and sewer fees were already waived administratively, but that the police and fire company enhancement funds required council approval.

“We just got the take home cars,” Councilman Andy Fulton said. “That’s a capital expense. We are borrowing money for the police station. We raised a referendum. I understand the importance of the Food Bank, but I also understand we are in this economic time for all of our citizens, not just those who utilize the Food Bank, but all the citizens. They deserve us to be fair here and I would suggest we not waive the fee and that we hold off on Carlisle until we hear back from them. I think they came to us wanting more money, not less and I don’t think they can afford to lose another $62,000 out of their budget.”

Councilman Culotta asked if there was a place council could meet in the middle by partially waiving the fees rather than waiving the entire amount. Councilman Fulton pointed out that half the fees being requested were already administratively waived.

“We have said ‘there you go, here’s all this money, $250,000 in fees are now gone from a quarter of a million dollars,’ that the city will not collect,” Councilman Fulton said. “Those are funds we use to give pay raises to our employees. So, we can do things like get another truck when a trash truck breaks down, or we need to get repairs. This is something we’re giving up, a quarter of a million dollars in service fees so that we can support the Food Bank. That’s a very large sum of money and I don’t think we can just scoff at that.”

Robinson explained that the total amount was around $470,000, but only about $250,000 would be waived for the police and fire company enhancement funds. Whitfield also explained that both enhancement funds were not used for the general operating costs of the fire company or the police but were a separate fund used for capital improvements. The funds waived already are also used for capital improvements, such as new water towers, but not for general operating costs.

“I’ve just seen them use these funds for projects because it frees up money they can use for other things like payroll,” Councilman Fulton said. “Perhaps I am just glossing over the bigger picture, but I see us move money to cover costs and then later having to move money again for manpower and other things.”

Vitola explained that the city used reserves to cover operating costs, but that they could not use the enhancement funds for that purpose. Whitfield again pointed out that the city had hoped to have $1 million in the Police Enhancement Fund by this time and that had not materialized which will mean additional bond money to complete the project.

Council agreed to table the request to waive the Carlisle Enhancement Fund fee until a response is received from the fire company. Council also voted to keep the Police Enhancement Fund fee at 0.75 percent. Sewer and water impact fees, however, were waived administratively, saving the Food Bank $106,000.