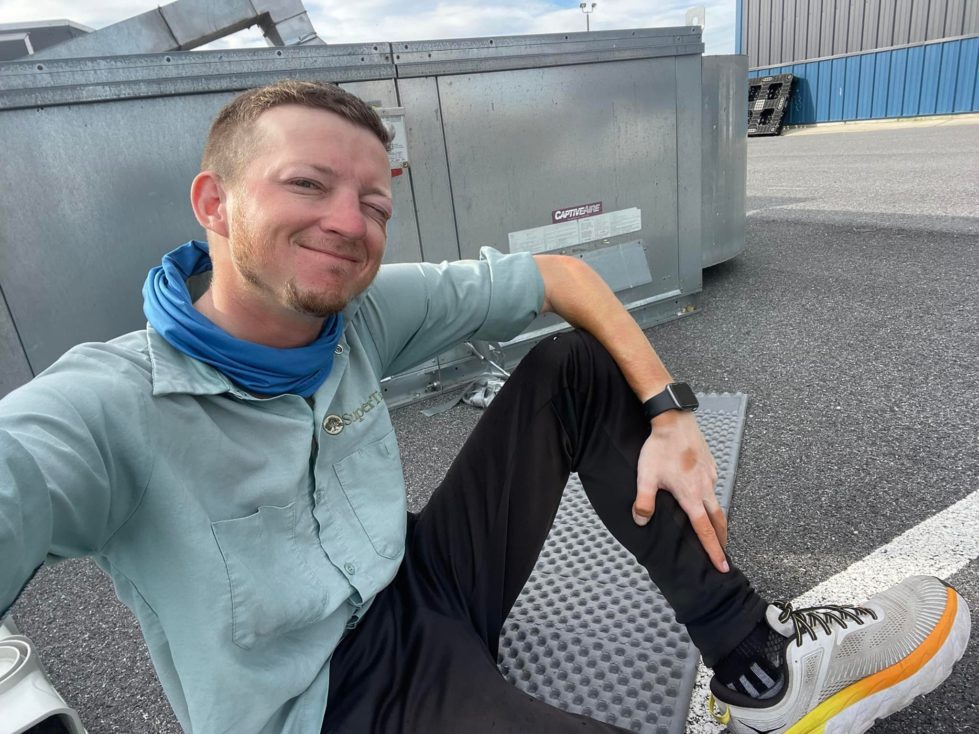 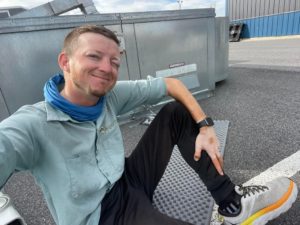 Isaiah Glen Shields at his overnight camp behind EasySpeak

“Whoever is in charge of public beautification in Milford deserves a raise,” a Facebook post from Isaiah Glen Shields read on Sunday, August 7. An incredibly picturesque and lovely historic downtown complete with a river walk, brick sidewalks flowers, trees, memorials, etc. What a lovely space they have created here.”

Shields was walking through Milford on a cross country trek he began in Provo, Utah. Feeling discontented with his life, even with a lucrative career in corporate finance, Shields got the idea one day to go for a really long walk. He did not begin with the goal of visiting all 50 states when he set out from Provo and travelled to the westernmost point in the contiguous United States, Cape Alava, Washington. Instead, he intended to travel from that westernmost point to the easternmost point which is Sail Rock off of West Quoddy Head in Maine.

“The only reason I have meandered so much was to accommodate the weather,” Shields said. “I was in Montana in October and then I walked down to Texas just so I wouldn’t have to deal with winters in Minnesota.”

On the Delmarva Peninsula on August 2, Shields traveled from Berlin, Maryland to Ocean City, Maryland. He came into Delaware through Fenwick Island often sleeping outside in his tent. He traveled through Rehoboth, Lewes, Harbeson, Georgetown, Ellendale and Lincoln before arriving in Milford on Day 398.

“I feel bad for my friend Amy here who invited me to get some dinner with her and instead she ate dinner with a zombie,” Shields posted on August 7. “She was, however, delightful. Her friend (and my newest friend arguably) Phil here reached out to the owners of the restaurant we’re at and they agreed to let me camp on the property.”

The next morning, Shields thanked the owners of EasySpeak for allowing him to set up camp behind the restaurant. He then walked through downtown Milford where he commented on how beautiful the town was. After that post, he remarked that he was glad he had “doubled back slightly to see Milford.” He stated that it was not just the visual beauty but now he had made memories as well.

“Probably just the way I’ve been embraced by people as I moved across the country,” Shields said when asked what things he would never forget on his journey. “I mean, people have invited me into their homes to sleep after having known me for a matter of 10 seconds or less. On a few occasions, they’re like “we’re not going to be here in the morning. We have jobs to go to, but you’re going to have to let yourself out and be sure to fill up on anything you want in the fridge.” To have that level of trust and just realize those people are not anomalies. It’s happened in every state I have been in and in every kind of weather and in every kind of climate you can imagine. It just goes to show there is more good stuff out there than bad.”

That is likely the most important thing he has learned, Shields said, that there is much more good in the world than there is bad, although people focus on the bad because it is attention grabbing.

“I would say the world is a much safer place than most people think,” Shields said. “You don’t hear about the 99 percent of people going about their daily lives nad contributing to society and taking care of each other and being involved. I don’t think we should let fear get as much control of our lives as it does.”

The journey has not all been pleasant, Shields explained. He walked through a lot of winter storms, a lot of rainstorms and hurricanes, even sandstorms. People on their phones were another obstacle he had to deal with, requiring him to always be aware that not everyone on the road has good intentions. However, he believes this journey is a very rich way of living and worth any obstacles to see the canyons, rain forests, prairies and the rest of America that he claims is “just beautiful.”

Shields believes he has about two more months of walking before he reaches West Quoddy Head and he does not know what he will do once he finishes.

“Your guess is as good as mine,” he said. “I might just turn around and keep going. I might rent a car and drive back home and sort of re-situate a few things that are there since I left. But I imagine learning what the world really looks like and trying to share that message will always be part of me. I want people to see things a little bit more clearly as I’ve strived to do on this journey.