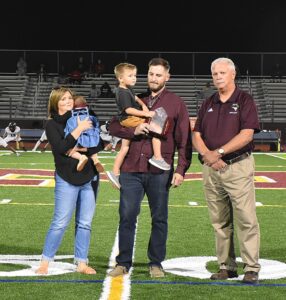 Ryan Deeney was inducted into the Milford Hall of Fame

Ryan Deeney was a key part of the 2008 Milford class, which the stars shined on. Even further, he was a leader both on and off the field. Deeney played center and linebacker on that squad, playing through both pain and injury, sometimes even having to be dragged off the field for his own safety. “Deeney was through and through a football player. We had a lot of talent on that team, but he was as tough as any of them. There were times when you couldn’t believe he was even on the field, let alone being such a key factor in so many ball games,” former coach Mike Tkach recalls.

A three-year letter winner and Blue/Gold selection, Deeney led by example, every challenge placed in front of him, he overcame. Being the center of a powerhouse offensive line, Deeney was a wrecking ball, for the double-dive play Milford ran as its bread-and-butter play. “We were so solid on the offensive line; the other team knew what was coming and simply couldn’t stop it. In the running game we had speed and power, there were times when I couldn’t believe how dominant we were over the other team.”

While it can be difficult to see the impact, there was no problem when it came to Deeney’s prowess on the defensive side of the ball. With a solid defensive line in front of him, Deeney and his linebacking partner Jason Kollock wreaked havoc on opposing defenses. “With Jason at my side, I was very confident in how well we could contain the other team’s offense all season long, it was a lot of fun,” Deeney said.

Deeney was also happy that Milford was able to turn around its fortunes against long-time rival, Lake Forest. “I really enjoyed beating them. While it’s for bragging rights, it meant a lot to us. I honestly think it was a big part of us gaining a winning attitude,” Deeney said.

Obviously the 2008 state title game stands out in Deeney’s mind as well. “We had so many people at the stadium it was insane. We filled up our stands, so a lot of our fans had to sit on the Laurel side of the field. The noise and support of that night is something I will never forget.”

Deeney garnered 2nd team All-Conference as a senior, as well as honorable mention his junior season.

Deeney would go on to play four years of college football at Wilkes University, alternating between linebacker and defensive end. Finishing up his career as a defensive captain.