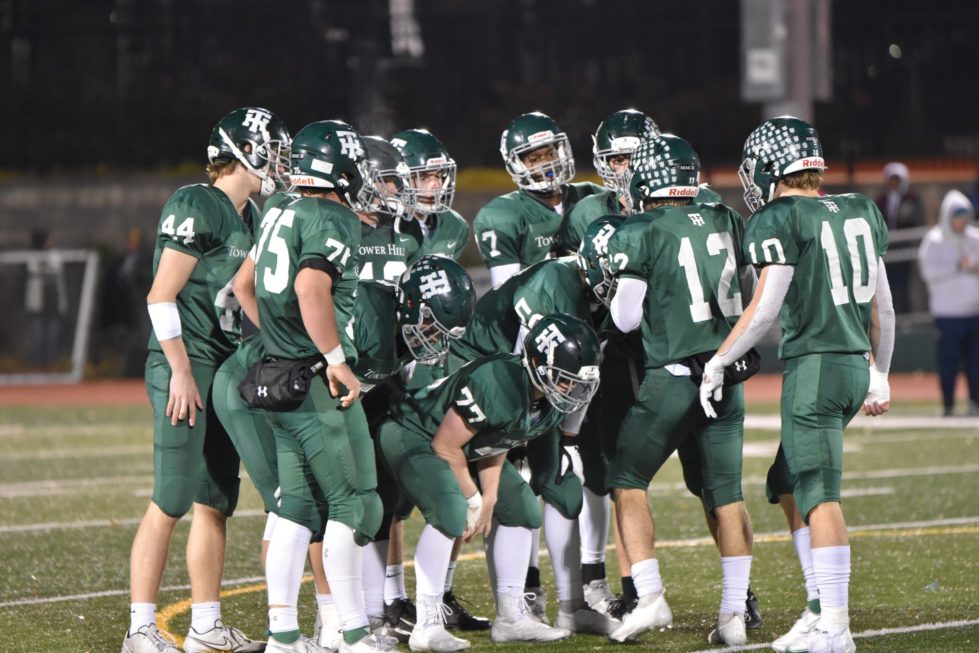 Wilmington – Saturday night was game where the two teams were so even the game could turn on a single miscue.

After Sussex Tech was forced to punt on the opening possession the Hillers mounted a 12 play, 57 yard drive that used up 6:20. Late in the drive Tower Hill faced a fourth and nine at the Ravens 23 yard line.

From there it would be mostly defense for both teams.

The Ravens were forced to punt on their next possession, but Zungailia came off the edge to block the punt at midfield.

As the Hillers were mounting another drive into Sussex Tech territory Dominick Pietlock fumbled on a second down carry. Jeremyah Handy recovered the fumble for the Ravens at their own 36 yard line.

Sussex Tech then mounted a long drive of their own reaching the Tower Hill 11 yard line. The Hillers defense stiffened stopping Jaryn Sample short on a fourth and one with 5:13 to play in the first half.

After a Tower Hill punt Sussex Tech took over at their own forty yard line with 2:46 on the clock.

On second down Justin Moore threw over the middle and connected with Grant Allen for a 35 yard pass play taking the ball down to the Tower Hill 21 yard line.

“Every football game comes down to turnover battle and who can win that. Heck of a job there,” Tower Hill head coach Kevin Waesco said.

On second down Sample was stopped short of the goal line when the Hillers Cade McPeak stripped the ball and Tower Hill recovered the fumble with 42 second left to play in the first half.

“We just stood our ground, knew where they were going and just filled the holes and stopped them,” Hickey said.

Tower Hill came out on the first drive of the second half scoring on a nine yard run by Pietlock giving the Hillers a 14-0 lead that they would not surrender.

Sussex Tech was not able to drive deep into Tower Hill territory the rest of the game.

Hickey carried the load for the Hillers carrying the ball 20 times for 110 yards and touchdown.

But Hickey heaped praise on the defense.

“Holding that team to zero points they have two big running backs their O-line is phenomenal. It was just an all around great performance from the defense,” Hickey said.

Waesco was pleased with his teams overall performance on both sides of the ball as well as Hickey’s 100 plus yard performance.

“We have a lot of great kids, Brendan Hickey is a heck of an athlete we have a pretty good offensive line too right, they were doing a hell of a job opening holes for him,” Waesco said.

The Hillers will travel to Greenwood next Friday night to take on the number two seed Woodbridge Blue Raiders with kickoff at 7:00.

“We have a lot of unselfish kids on this team they play together, I welcome the opportunity to have another week with my guys,” Waesco said.

Sussex Tech outgained Tower Hill in the game with 217 yards to the Hillers 172.

“You can’t make mistakes against a team like this, we didn’t finish drives tonight and that was the difference,” Sussex Tech head coach Brad Ellingsworth said.

The Ravens finished the season 6-5 reaching the state tournament for the first time since 2015.

Ellingsworth said that he will take positives from this season into next year.

“It has been an absolutely great season a roller coaster season we started 1-3 and we got to here. Hopefully the program is on the right trajectory,” Ellingsworth said.