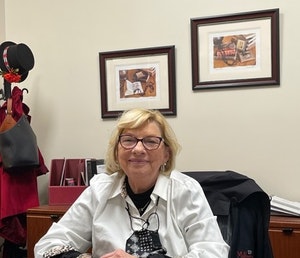 After 44 years with the Milford Public Library, Kay Hudson announced recently that she plans to retire. She began her career at the library in 1977 and became the director in 2000.

“I decided that at my age, it was probably time,” Hudson said. “My husband retired 23 years ago. My children have kind of been pushing for it telling me “Mom, it’s time.” When I told my son, he said “it’s about time.” It is a bittersweet decision, but I think it is the right one.”

“I love the downtown area,” Hudson said. “When I was young, I could walk everywhere downtown and I simply love that area. I remember when we opened this building, Ann Cannon and I stood at those big windows where we could look toward downtown. Tears fell as I watched all these people walking toward the library because I realized how important it was to our community.”

Over the years, the biggest change Hudson has seen is in technology. The library added computers that patrons could use, and the collection is now searched online rather than through card catalogs.

“I had to file all those cards back in the day,” Hudson said. “We had to type them up and file them. You may remember the little card we had to stamp with the due date in the back of the book. We had to type everyone of those up. Each day, we would have to count those cards and then file them. When I look back, I realize just how time consuming that was.”

“When the pandemic hit, we decided to try some virtual programs,” Hudson said. “We ended up scaling those back because they just weren’t as well received as our in-person programs. Kids were on computers all day in order to do their schoolwork, so parents were not as interested in having them sit at a computer screen and hear someone read a book to them.”

The pandemic has been difficult for the library, but Hudson and her staff have developed alternatives to continue serving the public. They offered curbside pickup so that people could still check out books and other items from the library. She was also instrumental in getting a book sanitizing machine for the library, obtaining the last of 10 available in the country so that books could be sanitized in order to be placed back in circulation more quickly.

“At the end of the day, no matter how technologically advanced we get, people still love books,” Hudson said. “Before the pandemic, we had more than 500 people per day using the library. Our meeting rooms were always busy and we had some groups who used those rooms weekly. People were coming and going in the library all the time.”

Hudson does not have any plans for her retirement. She used to sew but, as of now, doesn’t really have a desire to pick that hobby back up again. She and her husband, Sonny, like to take rides and her husband golfs three days each week. She has children, grandchildren and a new great-granddaughter who she hopes to visit more often. Hudson also plans to be available for her replacement, Ella Wilkerson, should she need any help or guidance.

“I will miss the people,” Hudson said. “I always felt this was a privilege. I owe a lot to so many people, like Richard Johnson and Pat Palmer. The board has always been there for me. It has been quite a journey.”

Hudson recalled a young boy who came into her office when he was about 12 just to talk to her. She realized the boy didn’t have a lot and that his homelife was not the best.

“He came in one day and told me he had an art project at the art league,” Hudson said. “He asked me if I would walk down to see it and I did. I took a picture of him with his artwork. He played baseball and once he asked me if I would come to one of his games. Sonny and I went to one game. He is now in his 20s and has been in some trouble, but I understand he is doing well now. The other day, Ella and I were walking back from City Hall and this car stopped down by the museum. This very tall man jumped out and ran toward us. It was this young man who told me “Miss Kay, I just wanted to stop and give you a hug!” That is the kind of thing that I will miss the most.”

Hudson stated that there were so many people she would not have gotten to know so well had she not held her position. She also knows that she is leaving the library in good hands with Wilkerson. The library will always be an important part of her life, however.

“My family, my husband, my children, my grandchildren, and now my great-grandchild have always come first in my life,” Hudson said. “But this library has been a very close second.”