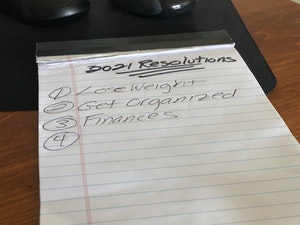 Keeping your New Year’s Resolutions starts with writing them down

With the start of a new year, many people begin looking at ways they can make changes in their lives, whether it is getting a handle on their finances, going back to school or becoming more organized. As 2020 comes to an end and 2021 begins, many in the area say they are making changes, although few are willing to call them “resolutions.”

“I never make resolutions for a new year,” Jeremy Dutton of Lincoln said. “My goals evolve during the year depending upon circumstances that arise. I, instead, choose to improve myself as a human being on a daily basis. How I react to situations and people. All the other stuff gets taken care of as it can. It’s something I implemented in my life to reduce anxiety and stress.”

Others resolved to have more fun in 2021 since “2020 was not so much fun,” and some, like Jo Schmeiser of Milford, set a goal to lose weight as she is reaching a milestone birthday this year. Schmeiser stated that she won’t lose the weight by her February birthday but hopes to do so by the end of the year.

New Year’s resolutions have been around for centuries. According to the History Channel, the ancient Babylonians were the first to make resolutions when they made promises to the gods to pay debts and return borrowed objects. They believed that if they kept those promises, the gods would bestow favor on them in the coming year. For early Christians, the first day of the new year became the traditional occasion to think about past mistakes and resolve to do better in the future. Today, however, the practice of making resolutions for the New Year are not tied to religious practices.

As many as 45 percent of Americans say they usually make resolutions yet only 8 percent are successful in achieving them. There are things you can do, however, that may help you keep your resolutions in the coming year.

Harvard University suggests aiming high which will allow you to break the larger goal into smaller, easy-to-achieve goals. Write down any resolutions you set for yourself as well. Studies show that seeing goals in writing makes them more realistic. Once you have decided on the goals you want to achieve by the end of the year, break the large goals down into smaller ones. Even starting your plan with “make a list,” can help motivate you as crossing something off a list gives you a feeling of accomplishment, even if it is something small.

It is also important to recognize when you should not make a change. There are some behaviors, like unhealth eating and smoking, that provide a payoff. Too often, people decide to eliminate those behaviors but also eliminate the pleasurable aspect of the behavior. For instance, if you smoke when you take a break, you don’t want to stop taking the break to avoid smoking. Instead, take the break and do something healthier, such as taking a walk. Start your weight loss journey in moderation, slowly lowering your intake of unhealthy options and adding healthier ones to avoid feelings of deprivation.

Another way to achieve your goals is to ask for help. If someone else in your office has resolved to lose weight, team up with them to create a natural support group. Make your resolutions known so family and friends are aware of what you are trying to do. You also need to reward yourself throughout the process and not just at the end of the year. If you are losing weight, find a non-food reward for each weight goal. If you stop smoking, reward yourself for every week or ten days you don’t light up.

Keep in mind that you will slip up, but you should use those mistakes as a learning experience, not a failure. A birthday party where you eat more cake than you should or a social gathering where you cannot resist the urge to light a cigarette is not the end of your journey, simply a setback. Sit down with your goals and think about what caused the mistake in the first place. Remember that it was one mistake and you can move forward from that mistake.

It is important to remember that change must be viewed as a marathon and not a sprint. Focusing on small changes can help you reach the bigger milestones you set for yourself. Of course, for those who don’t make actual resolutions, that does not mean changes cannot be implemented.

“Last year, I made a very optimistic proclamation before midnight and I learned my lesson,” Nadia Zychal of Milford said. “No, never going to tempt fate again. But the lesson I learned was to take each day as a gift and make the best of it, whatever the circumstances and take opportunities as they present themselves. I found that looking forward to things too much inevitably leads to disappointment.”