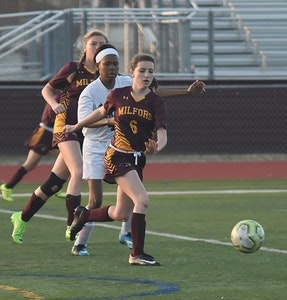 When he was in high school, soccer wasn’t even a thought for Prince Kemmerlin.

“Not a chance,” laughed the former Milford High standout who used to spend his fall Friday nights running up and down the football field, not kicking around a soccer ball.

Yet Kemmerlin now finds himself beginning his first year as the head coach of the Milford girls’ soccer program. The spring regular season kicked off Monday, March 22 at home against McKean High.

“For me, it means a lot, because I graduated from Milford so it’s great to come back,” he said. “I’m kind of reinventing myself because the community knows me as a football player from the past, so it’s nice being an adult now and coming back with a fresh new outlook on my sports career and shocking people when they see me on the sideline for soccer. It’s pretty sweet.” 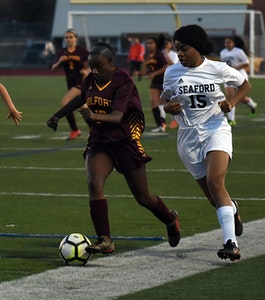 Kemmerlin was first introduced to the sport of soccer by a couple friends while attending University of Delaware. Ever since then, it’s been a passion of his. It was the undefeated 2003 Arsenal F.C. team that had Kemmerlin falling in love with soccer, with his favorite player from that team being Thierry Henry.

“They got me into soccer big-time, back in 2003, when I graduated and went to college,” he said. “They kind of got that bug set in my blood and I haven’t turned back since … I did not play in high school, I was a late bloomer. I picked it up in college, busted my butt in between classes and then I ended up coming down here and playing in the South American League there at Eagle’s Crest for two seasons. 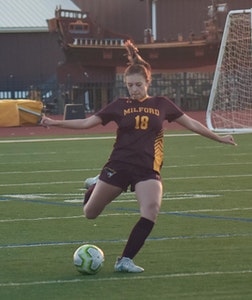 After being hired on with the Bucs in mid-February, Kemmerlin hit the ground running with an already-familiar group of girls. He spent the last two years as head coach of the MCA girls team and the three years before that as an assistant with both the boys and girls teams.

This year’s squad, after missing all of last year due to the Coronavirus pandemic, is coming off of a 3-12 season in 2019. The varsity numbers are down from two seasons ago, with 22 players currently listed on this year’s roster.

“Everyone, except the seniors, I coached at least one year, if not all three of their MCA years,” he said of this year’s team. “I really enjoy coaching the girls, they listen, they do everything so direct and they play their hearts out.”

Abbegail Allen, Allison Benton, Emma Sekscinski, Miranda Walker and Rebecca Wisniewski make up the senior class of five. Carley Mackert is the lone freshman to make the varsity squad, with the 16 sophomores and juniors making up the remaining roster.

Kemmerlin expects it will be Allen, junior Olivia Muir and Sekscinski who will end up being team captains.

The position battle at goalkeeper leading up to the last few days of preseason practice was between junior Shana Smith and sophomore Allyson Perry.

“We’ve got a really good group of seniors,” Kemmerlin said. “Abbegail Allen has been here all four years, she’s been a really intricate part of this team, she listens and is still very eager to learn even though she’s very athletic and capable. We have Olivia Muir who is a junior, multi-sport player and she’s got a nice athletic background behind her. The voice of our team, Emma Sekscinski, she keeps us straight. I’m sure if you’re in the crowd you’ll hear her barking orders on the field.”

Player development was Kemmerlin’s focus while he was at MCA, so he’s excited about the idea of building the program up and teaching some of the girls who are new to the sport.

When he noticed there wasn’t a girls’ soccer banner hung up in the gymnasium, he asked if they could hang a blank one up to use as motivation.

“You build it, they will come,” he said. “I asked them to put the banner up, the banner will be going up in the next few weeks when they’re putting some other ones up … It’ll be a blank banner, I wouldn’t want it any other way. I wanted the girls to see that so that they’ll have that expectation … We’ll fill that thing up soon.”