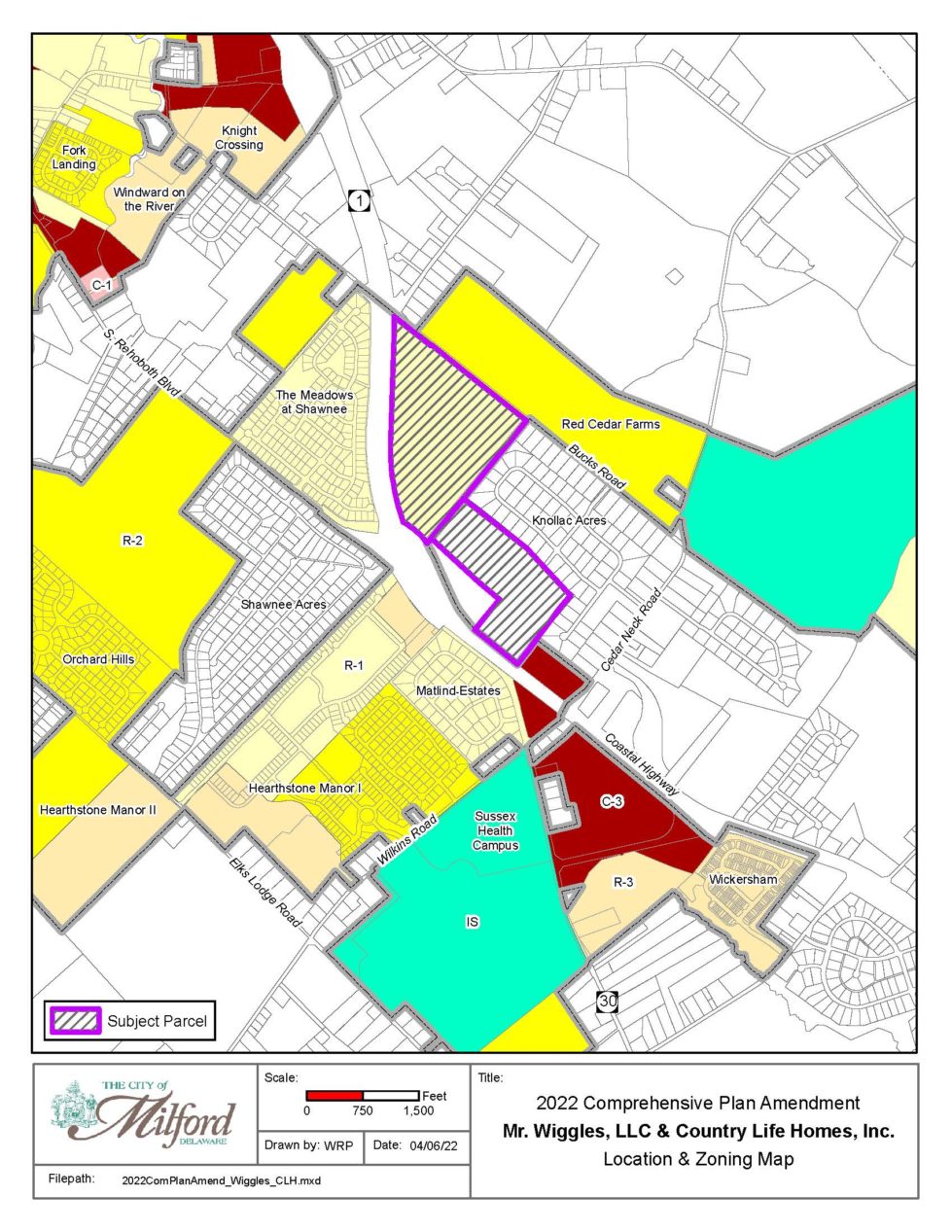 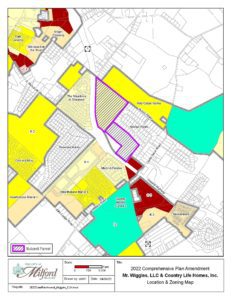 With a vote of 6 to 1, Milford City Council denied a request from Country Life Homes and Mr. Wiggles LLC to change the 2018 Comprehensive Plan. The change would have changed over 110 acres of land located on the east side of Route 1 from Low Density Residential in the future use Comprehensive Plan to Commercial. City Planner Rob Pierce provided a brief history of the two parcels and the owner’s previous requests to have the property rezoned.

“The Planning Commission reviewed this at the May 17 meeting and recommended denial of the Comprehensive Plan amendments upon a vote of four to two. The reasons for denial included they were not in favor of the Comprehensive Plan amendment because they felt there was adequate commercial land inventory already within city limits and along Route 1 and they had concerns about access to the property and compatible land uses,” Pierce said. “The two dissenting votes that were supporting the amendment request, felt that the city should give the developer an opportunity to see what can be done with the property and that the proposal would benefit the city from an economic development standpoint.”

After presenting the history of the property, Pierce turned the meeting over to the applicant for comment.

Griffin pointed out that changing the designation in the Comprehensive Plan did not approve anything but that it simply meant future commercial development was possible. He pointed out that his client would then be able to reach out to developers to see if anyone was interested in placing a commercial building on the land. During the public hearing portion of the meeting, Senator David Wilson expressed support for the change, stating that there had been a letter submitted to Planning Commission with his signature that was not created by him, but that a corrected letter was included in the council packet.

“We have got to take a serious look on where are we going to put commercial businesses on the east side of Milford. If you’ll take a look on the west side, what have you done to the City of Milford on the west side. You can’t get down 113 now on Friday and Saturday night for traffic I’m here to discuss the future growth of what happens in the city of Milford. I’ve been here for 72 years, and I can tell you 60 years ago Milford was better served on commercial businesses. Let’s go back, let’s just take you on a little heritage tour here. Let’s go back and look at what happened in Milford and back in the 60s and 70s with clothing stores, Coopersmith, Hoffman, Fisher’s, JC Penney’s, Derricksons, Grant Store, you could go to Milford and buy a suit of clothes. You could go to Milford and you can take and do your shopping. A lady could go get an evening dress. You can’t even get a shirt and Milford now, Why do people go to Dover? Why? Because Milford doesn’t have what it needs right here in Milford.”

Senator Wilson, however, was the only person to speak out in favor of the change in the Comprehensive Plan. Steve Griffin, President of the Homeowner’s Association with Knollac Acres, spoke for the homeowners in his development.

“Mr. Fannin and his company purchased that land around 2016 after the plan was already adopted,” Griffin said. “He should have done his due diligence when he purchased the property. This was in the Comp Plan. That’s why you do due diligence when you purchase land. Let’s talk about Mr. Wilson saying that we would not our subdivision wouldn’t be here if he had anything to do with it. You’re right. But we are here. Fact is that land is zoned residential. Our developments exist. There are 30 homes around Knollac Acres, 30 homes plus less you have Hidden Acres and the other homes down Cedar Creek Road. What is your commitment? Us? Some of us are in the city of Milford. As one council member said earlier today I have an obligation not only to the citizens but to the neighbors of the city of Milford. That’s us.

It would be a horrible injustice to approve this which opens up the gateway.”

State Representative Bryan Shupe also spoke out against the change, talking not as a state representative but as a resident of Knollac Acres.

Representative Shupe pointed out that the applicant could claim that the change to the Comp Plan did not mean commercial was going to happen, but in his experience, once the plan was changed, the argument would be made that since the Comprehensive Plan showed commercial, the zoning needed to change to match that plan.

“Any decision you make tonight should be based on the facts that you have today, not on what someone hopes they’ll be down the road somewhere,” Howard Webb said. “This property does not have access to Route 1, does not have access to Cedar Neck Road. There could be access on Bucks Road, but it has very limited capabilities. What it boils down to our applicant’s property has a location problem. And that should not be a city problem. So we’d like for you to give that consideration.”

Lucius Webb spoke against the application and suggested that council members who accepted campaign contributions from Elmer Fannin, one of the owners of the property, should recuse themselves from the vote. Councilman Todd Culotta admitted that Fannin had contributed to his campaign when he ran for mayor along with about 30 other people and he did not feel that he needed to recuse himself. Solicitor Rutt supported Culotta’s decision stating there was no conflict of interest.

Public comment continued for more than two hours as many residents in the vicinity of the property expressed concerns about changing the land designation to commercial. When Vice-Mayor Jason James called for a motion on the first property, Councilman Michael Boyle motioned that the request be denied. The motion was seconded by Councilman Brian Baer. Councilman James then called for a roll call vote with 6 members voting to deny the motion and one, Councilman Culotta voting to approve it.

“I am voting against the denial for the simple reason that this is just a change to masterplan just to have a discussion about what possibly could go there. It doesn’t guarantee that they can build anything tomorrow and they can’t break ground without a whole lot of approvals necessary to get to that point, but we’re not even close,” Councilman Culotta said. “My concern is that urban sprawl with more housing over there, it’s likely that the golf course may become a development and it’s possible that if, let’s say Lowe’s or something like that were to go where Redner’s is now and that shopping center. A lot of those folks who live in that part of town are gonna come through. Then we’re gonna get complaints about people driving through those developments to get to those retail areas. I do appreciate the residents not wanting this right next to them. I do appreciate that. I do understand that. But I was elected to represent the taxpayers and voters of not 64 households that just don’t want it next to them. Again, I appreciate it, I don’t disagree with them, but I’m looking at the big picture here.”

The vote for the second parcel’s change in the Comprehensive Plan was also defeated with a vote of six to one with Councilman Culotta casting the only vote to approve.