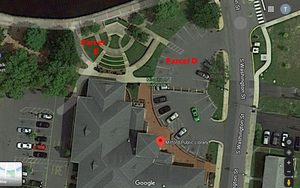 On Feb. 22, Milford City Council voted to complete a land exchange between the city and the Milford Public Library. This exchange was related to a survey prepared in 2009 filed with the Sussex County Recorder of Deeds.

“The northern part of the library parking lot is owned by the city while a portion of the amphitheater is owned by the library,” Rob Pierce, City Planner, explained. “Back in 2009, these two portions were supposed to be transferred between the city and the library. In addition, there was an abandonment of Pearl Alley which was eliminated based on this plat. We have been working with Bob Nash who developed this survey to try to correct this oversight and it has been reviewed by the City Solicitor.”

Pierce explained that he met with the library commissioners and presented them with the details of the land swamp to determine if they were still interested in exchanging the parcels of land. Pierce stated that he felt he should revisit the issue since the initial survey was completed over 15 years ago and was unclear whether there was ever any formal action by the library board to agree to this exchange.

“The library board agreed to proceed with executing any required documents to finalize the land exchange,” Pierce said. “The only condition was that the city coordinate the use of the amphitheater with the library. Staff recommends adding a statement to the existing agreement between the library and city to that effect as the agreement is due to be renewed in the next few months. At that time, the language can be added.”

Councilman Dan Mirabello asked if this land exchange meant that the library no longer owned the amphitheater.

“The city already owns between one-half and two-thirds of the amphitheater,” Pierce said. “This change means that the city will now own the entire amphitheater as part of the Riverwalk. Parks and Recreation already works with the library to schedule usage of the amphitheater, so that relationship will continue.”