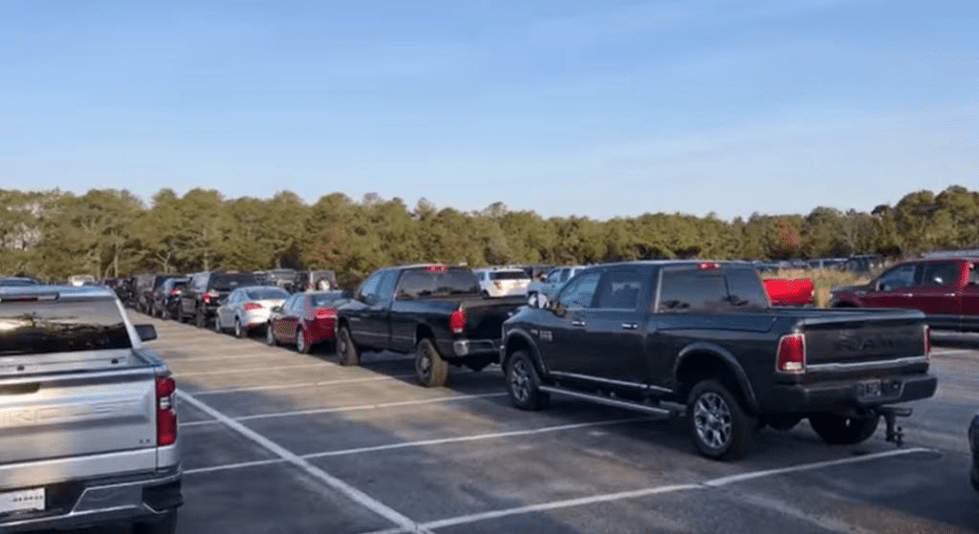 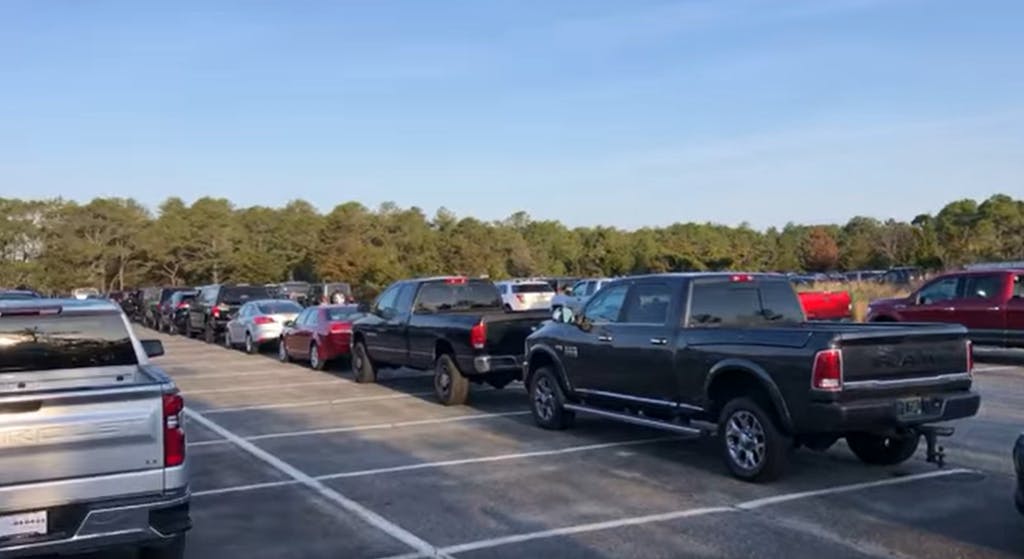 The line for surf tag vouchers at Cape Henlopen. Photo by Jonathan Budler.

It wasn’t a typical Delaware bay sunrise this morning as droves of people waited in line at Cape Henlopen State Park for a fisherman’s version of coveted gold ticket.

With only 1,000 Delaware surf fishing tag vouchers available statewide, 250 were up for grabs at this coast location. Some people waited in line since last night, enduring cold and occasional honks and headlights from inconvenienced cars.

The surge in interest was sparked by Gov. John Carney’s announcement that an additional 1,000 tags would be available for purchase as a way to encourage safer outdoor gatherings and keep COVID-19 cases at a minimum this summer.

The state’s normal allotment of 17,000 sold out in early March this year. They usually sell out in mid-summer.

John and Kaila Vighte of Pennsylvania were one of the lucky few to get a voucher. They were one of more than 100 people waiting in line overnight. With two young kids in tow, they decided to make it a memorable trip and expected the line.

“We’ve been waiting since roughly 10 o’clock last night,” John says as they showed off their voucher. “We came prepared with a packed cooler of food, water and juice for the kids. Handhelds and sky provided entertainment. It was nice.”

The voucher was fairly simple: A piece of paper entitling the Vightes to “one (1) one-year Delaware State Parks surf fishing permit for the 2021 season,” to be picked up by April 28. Their Jeep’s license plate number and name was scribbled at the bottom.

“Such a big deal for a small thing,” John says.

It was a big deal for a lot of people who turned out for the tags. Lines were reported at all voucher locations, including Lums Pond and Delaware Seashore State Parks. Many locations were sold out by 7 a.m., and several disappointed hopefuls were turned away at a cut-off point.

Across several Facebook groups,  people posted about long lines and the excitement and disbelief at the surf tag craze going on.

For many waiting in line, it was finally the opportunity to get out of the house after a year of introverting during the pandemic.

“I just think it’s a need to return to a normal,” Kaila Vighte said. “It’s been a rough year for so many people and getting out of the house to enjoy the sand is a perfect remedy.”

Several people who were turned away expressed disappointment at how the state handled its surf tag “fiasco.”

Several people reported camping out for tags just to be turned away when offices opened in the morning. Many felt those tags should have been given priority to residents only, but DNREC made it clear that they could not do that because of federal funding restrictions.

Regardless of the complaints, 1,000 people walked away happy with a surf tag this morning.

As for the Vighte’s plans after securing their voucher: A nap and fishing.