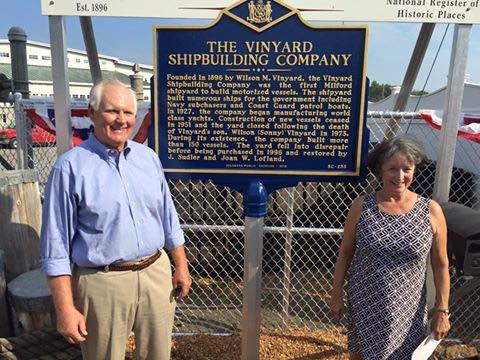 Sudler and Joan Lofland, owners of the Vineyard Shipyard and prominent members of the Milford community will celebrate their 50th wedding anniversary on Dec. 28 with a trip down memory lane.

Joan said the couple decided they did not want a big celebration party to commemorate the event.

The couple, who married at St. John’s Catholic Church on Seabury Avenue, still own the car they drove away from the church that day, a 1929 Lincoln Town Car.

They felt it would be fun to decorate the car as it was after their ceremony and ride through town. On their wedding day, they took the car from the church to their reception at the Blue Coat Inn in Dover.

“We plan to arrive at St. John’s around noon,” Joan said. “We actually still have the original Just Married sign, but Sudler is creating one that says “50” on it to put on the back of the car. We are tying cans to the bumper and riding around town just as we did 50 years ago.”

There is not a set route for the couple to travel through Milford.

Joan said they have been friends with the Dave Burton family for many years so hope to ride past their home.

Joan spent many years as a Milford Museum commissioner, and they plan to travel past there as well.

They want to ride by the Prettyman house at 210 South Walnut Street as well. The Lofland’s called that house home for many years.

They will travel past City Hall where the Vale Mansion was located for many years.

“The Lincoln has only had two owners,” Joan said. “The original owner was Ruby Vale who donated the land where City Hall now sits. Sudler bought it in 1963.”

They are also hoping to ride to Old State Road in Lincoln where Joan grew up.

According to Joan, the couple went on their first date in the car in 1966 and they were married on her 22nd birthday.

Both were born in Milford and have lived in the town the entire time of their marriage.

“The route is dependent on weather,” Joan said. “We are not doing any type of reception or gathering because of COVID.”