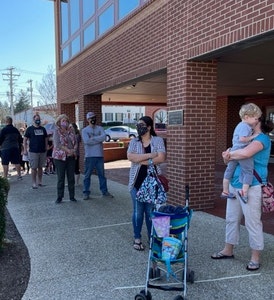 Downtown Milford was filled with families searching for the answers to clues provided by the Milford Public Library on March 27. The library held a downtown scavenger hunt to encourage people to visit the downtown area

“We wanted to do something with COVID that was more spread out since we couldn’t have that many in-person events at the library yet,” Kim O’Hea, Children’s Librarian, said. “We thought since we have such a beautiful downtown walking area, why not utilize it. I attended a DMI meeting, and they were all for it. Anchor Church donated water, so this has been a full community effort.”

Each family received a scavenger hunt sheet with clues that directed them to the 18 downtown Milford businesses who were participating. When they arrived at the business, the sheet was stamped, and each child received a treat that they could then place in the bag given to them by the library. Clues included “I am a mansion whose street is named after me,” “Look for paintbrushes, paint, paintings and much more,” as well as “I have Milford’s first stop light and I have a ladybug on my front steps.”

“We thought this would be a great way to bring people into the gallery and let them see what we have to offer,” Morgan Golladay, President of the Mispillion Art League said. “We opened June 1 with limited hours and, with COVID, have limited our live classes until December or January. We are now offering live, online and hybrid classes. We have only done soft openings for our exhibits, so we are excited to have a whole new group of visitors today come in and see what is available here.” Galloway, wearing bouncy bunny ears, handed out glow bracelets to those participating in the event.

“This was such a great event,” Claudia Leister, Executive Director of the Milford Museum, said. “We had 101 people come into the museum on Saturday. I found little ladybug lollypop holders that we gave to each child who participated. I cannot tell you how many people said “I’ve been meaning to come in here.” This was such a great way to get people downtown to see what we have to offer.”