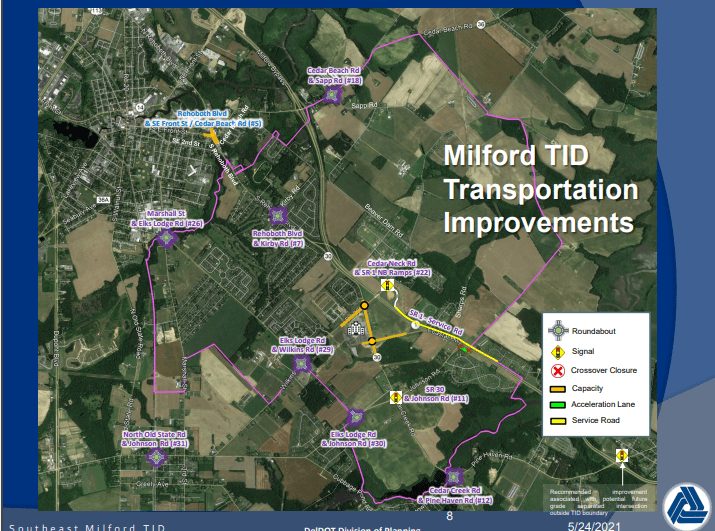 At their regular meeting on May 24, Milford City Council held a workshop regarding the proposed Southeast Milford Transportation Improvement District (TID) plan presented by Susan Coakley, AICP, Principal Planner for DelDOT on May 10. The plan is designed to improve traffic patterns in the southeast area of Milford up through 2045.

“The reasons a municipality may want to create a TID is to help them with comprehensive infrastructure planning, receive extra prioritization points in DelDOT’s Projects Advance and to keep TID fees local as the funds can only be used in the TID,” Coakley said. “There is also equitable treatment of developers as everyone pays for the improvements, developers have known costs when it comes to off-site improvements and you can save six to nine months in development reviews.”

According to Coakley, the next steps require DelDOT to forecast traffic based on the future land use plan and identify improvements necessary to meet service standards expected in 2045 as well as to provide concept plans and cost estimates for the improvements.

On May 10, Coakley provided council with details on improvements DelDOT felt would be necessary in the area. Data indicated that are more than 8,800 new residential units planned in the area by 2045 and 1.2 million square feet of new commercial building during that timeframe.

“The plan also recommends a new traffic signal at Route 30 and Johnson Road and at the northbound ramp at Cedar Neck and Wilkins Road,” Coakley said at the previous meeting. “Two turn lanes need to be added to the entrance and exit ramp to the hospital and Rehoboth Avenue and Southeast Front Street need left turn lanes. There are also some recommendations for Route 1 which will be covered by the Corridor Capacity Preservation Program. A new signal at Argo’s Corner which will eventually be replaced by a grade-separated intersection. We propose a service road on the east side of Route 1 and suggest closing crossovers at Johnson Road and Sharp’s Road. These will not be part of the TID but will be funded by DelDot.”

About 20 to 50 percent of the improvements would be paid by developers and collected at the time building permits are issued. In most cases, the fees would be neutral as costs would be covered by all developers in the area for all improvements, not just by one developer should one signal be added offsite due to their plan.

“Normally, if we require a signal, the developer has to pay that,” Coakley said. “If there is a frontage issue, they have to pay to construct the frontage. Sometimes we have them pay a contribution to other projects we have in the pipeline. The TID fee replaces those fees. Everyone would pay the same charge no matter where in the area they are located.”

Council voted seven to zero to allow DelDOT to begin compiling cost estimates and move onto the next steps for the TID.