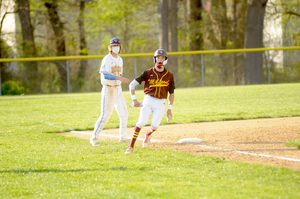 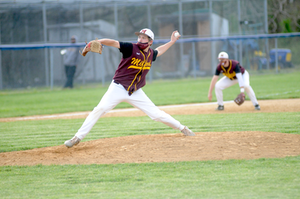 Alex Mergner had a near-perfect afternoon on the mound.

With a double-digit lead, it took only five innings to complete the win over the Henlopen Conference Northern Division foe.

It marks the Bucs’ seventh straight victory after dropping the season-opener, 13-2, to Cape Henlopen High March 23. The 7-1 Bucs have a busy week ahead as they get set to host Polytech High April 20 and travel to Seaford High April 22 and Middletown High April 24.

“We were loose, we came in here with good energy and we did what we were supposed to do today,” said Milford coach Nick Brannan. “I’m really proud of Alex for limiting them out there. That’s what a good team does — you do what you’re supposed to do, you come out with good energy. Alex was in the zone, he attacked … You grind out at bats and good things happen.”

Mitch Leighty led the offense, collecting three hits and scoring a pair of runs, while Mason Morris drove in three runs, including the two-run single in the fifth inning that capped Milford’s scoring for the day.

Junior Shawn Saxon also drove in three runs, including a two-run single in the top of the fourth inning.

“We just kind of prepared like we usually do coming in today,” Leighty said of the team’s hitting approach. “We were mostly looking for fastball and then adjusted to the off-speed too, but we really just came in today like we always do.”

Caesar Rodney’s pitchers struggled to throw strikes as the Bucs lineup drew nine walks and plated seven of their 11 runs in the top of the first inning. Caesar Rodney’s defense also committed three errors, which the Bucs made sure to take full advantage of.

Five of the seven first-inning runs for the Bucs came on bases-loaded walks, with the other two runs coming in due to a bases-loaded hit by pitch and a sacrifice fly.

After putting up the quick 7-0 lead, Mergner made sure the CR hitters didn’t settle in against him.

Jacob Armstrong’s infield hit to the shortstop to lead off the bottom of the first inning proved to be the lone hit for the Riders (3-3), and the pitcher allowed just three other CR players reach base the rest of the game — an error, a hit-by-pitch and a walk.

“I think it was just our preparation before the game, and then Mason’s pitch calls during the game,” Mergner said of what went right for him on the mound. “I think we just had a good executed game plan with knowing each hitter before going in and we just executed and did our job. Defense did their job too.”

Mergner retired the last five batters he faced to pick up the complete game shutout.

With 10 games remaining on the schedule, including three against Henlopen North foes Sussex Tech High, Sussex Central High and Dover High, the Bucs hope to keep the momentum going.

“I think we’re all doing very well this year,” said Leighty. “We all came into the season ready after not having one last year, so we were all hungry to get back at it, do the work and get to states … we’re just taking it one game at a time right now and whatever happens, happens. We’re just focusing on what’s in front of us.”