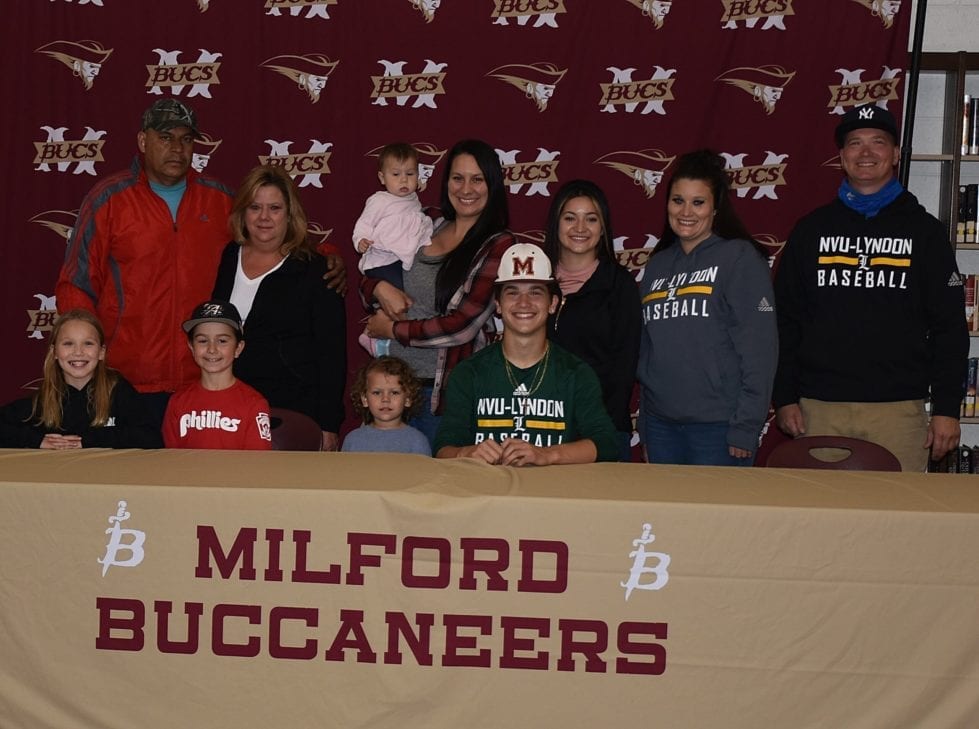 If you are a fan of Milford sports, you are probably familiar with the name Dale Ostermann. A two-sport athlete, who competes in both baseball and cross country. Ostermann brings a passion to athletic competition, as well as solid grades in the classroom. As a result, Ostermann will be pursuing all these interests as he heads to Northern Vermont University at Lyndon. Ostermann has committed to the Division III school and last Friday, his family, coaches, and friends were on hand to celebrate his commitment.

Ostermann was asked why he chose NVU-Lyndon, where he will major in Business, while competing in two sports. “It really felt like a good fit. The coaches were very interested in me and the campus is great. There is also an opportunity for me to get some playing time right away, which is very important to me.”  While Vermont might seem a long way from home, Ostermann believes that it’s important for him to get out there and start seeing the world. “It’s an eight-hour drive, so it’s doable when I want to come home for special occasions and things like that. But I really am fascinated by travel. I want to visit as many places as possible. Lyndon is beautiful so I am really looking forward to spending time there,” Ostermann said.

While most athletic careers were put on pause during the COVID outbreak, Ostermann gained an advantage as he was allowed extra time to heal from a torn labrum. While the injury was serious, Ostermann took advantage of the downtime to strengthen his throwing arm. Ostermann is slated to play infield at the next level and can play any position. Ostermann’s arm has healed so well in fact, he has been able to contribute significantly on the mound as well. “I have to say, the work that Dale has put in is phenomenal. We were hoping to have him available to play a position this year. The fact that we have gotten a great deal of quality innings from him at the pitcher’s spot, that is a tribute to his work ethic,” baseball coach Nick Brannan said.

Speaking further with Brannan, it became obvious that there was a soft spot in his heart for Ostermann. “It is very difficult to explain what Dale brings to the team. While he is a talented athlete, he brings so much more to the team. His personality is infectious, he is always keeping people loose and making sure people are having fun. At the same time, he makes sure that he is on top of his job and by example the players follow. I am telling you; this young man is going to be a success in the future, there is no doubt in my mind. He is planning to go into business and there is no doubt in my mind he will succeed.”

I also reached out to Ostermann’s cross country coach, Lance Skinner, who took the time to share his thoughts, as well as the running accomplishments he has achieved. “Dale has been involved with the Milford cross country program since middle school.  Coaching him over the past four years has been a privilege.  Dale has been a team leader since his freshman year.  Besides his great sense of humor, Dale has been a true asset to our program.  Dale moves to the next chapter of his running career at NVU after several accomplishments with Milford cross country.  These include team captain, All-Kent County, Coaches Award (2X), Most Improved and listed in the top 20 fastest runners of all time at Milford High School. Dale is a multisport athlete and truly represents the Milford cross country motto – ‘Pride, Confidence, Success!’”

When it comes to success, whether it be in sports or in life, very few people do it alone. For Ostermann, it has been his coaches, but most of all his father, Dale. “My father has been there every step of the way for me. I can’t begin to tell you how much he means to me and how much I love him. I have a great family, but when it comes to baseball, there is no doubt in my mind, I would not be where I am today without him.”