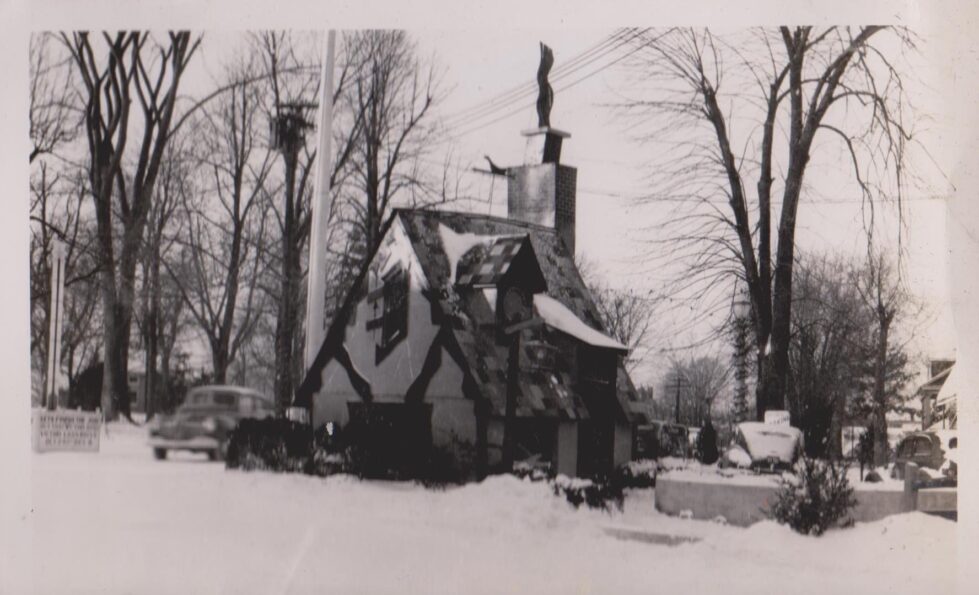 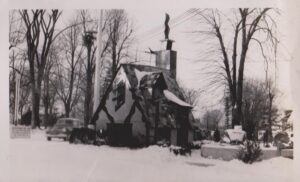 With the Christmas season underway and children line up to give Santa their Christmas wishes, it is a great time to remember the Santa Houses in Milford from years gone by. Around 1939, Al Humes, owner of Humes Hardware, built a small house that was designed specifically for Santa in downtown Milford. The house was known as the “Storybook House” and resembled a gingerbread house. It was set up on the Plaza, in front of where the City of Milford Customer Service Office and the Jesus Love Temple now stands. The home was surrounded by a fence and there were evergreens, a sleigh and a sign depicting when Santa was taking requests. At one point, there were even reindeer on the lawn of the house. It is unclear when this Santa house was removed.

For many years, this home was located behind Gooden’s Flower Shop on North Walnut Street. Recently, the building was sold to a private citizen who moved it to their property.

In 1984 or 1985, John Eustis, who was President of the Milford Plaza Merchants Association, decided that the Plaza needed a Santa house. He is unsure whether the association purchased a shed or whether the shelter was built by members, but it was placed in a vacant area between where Ames and Leggett’s were located at the time. Today, the Ames Department Store has been divided into several different stores while Harbor Freight is planning to open a store in the former Leggett’s building. 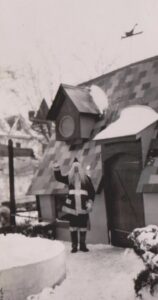 “I hired a Santa, Bill Dillinger, who was awesome with the kids,” Mr. Eustis said. “We had entertainment when he was there. We had the Milford High School Jazz Band perform, other local groups who sang Christmas Carols.” Mr. Eustis said that the Santa House at the Plaza ended when Mr. Dillinger passed away suddenly. Not long after that, Mr. Eustis said he believes the downtown merchants took over the Santa House project, moving it to Walnut Street.

Many long-time residents of Milford and the surrounding area remember other Christmas traditions downtown when they were young.

“My fondest memory of Christmas when I was young was the Coffman-Fisher store on the northwest corner of North Walnut and the river,” Carolyn Humes said. “After Thanksgiving, they decorated their second floor into a Christmas toy land. We had never seen so many toys! I am sure there was a Santa there as well. It was a child’s paradise and a wondrous experience.”

Barbara Jones of the Milford Museum didn’t recall a lot of activity or decorations when she was young in Milford. She recalled that there were choruses and bands who performed in an empty lot on Walnut Street before W.T. Grants expanded. Today, the area is where Davis, Bowen & Friedel’s offices are located. Ms. Jones said that much of the holiday celebrations downtown were at churches, many of whom held cantatas and Christmas Eve services that were well attended each year.

Many people recall the downtown area being filled with shoppers. Stores like J.C. Penney were full on Saturday’s right before Christmas and many recall it being a joyful time. Those who recall the 1950s and 1960s recall several ladies clothing stores, shoe stores and more. Christmas cards were often purchased at Milford Pharmacy and it was not unusual to see people at Woolworth’s lunch counter enjoying their famous milkshakes.  Randy Warnick, who grew up in Greenwood, also remembers shopping in Milford at the A&P, Woolworth’s, Grants and Penney’s during the Christmas season.

According to Charles Gray of the Milford Community Parade, in the 1990s, there was a decision to create a Christmas parade in Milford as almost every town in the area had one.

“I believe it was Owen Brooks who mentioned he would like to see one in Milford,” Mr. Gray said. “Milford Community Parade organized one for three years and tried to make it stand out. It was held on the Saturday after Thanksgiving with no commercial floats. I believe the church consortium was on the committee as was Councilwoman Katrina Wilson. We had horse-drawn carriages, floats created by churches and attendees voted on who had the best float. We did not have Santa in the parade.” Mr. Gray said that the parade walked the Riverwalk to Bicentennial Park where a chorus sang Christmas carols. Church participation dwindled and the Saturday after Thanksgiving had a small turnout, so the decision was made to discontinue the parade.

Mr. Gray explained that the parade was held at night in order for people watching to enjoy the Christmas lights downtown. He mentioned that he would be interested in creating an exploratory committee to bring the parade back, possibly combining the parade with Santa’s arrival downtown on Small Business Saturday, which is held the Saturday after Thanksgiving.