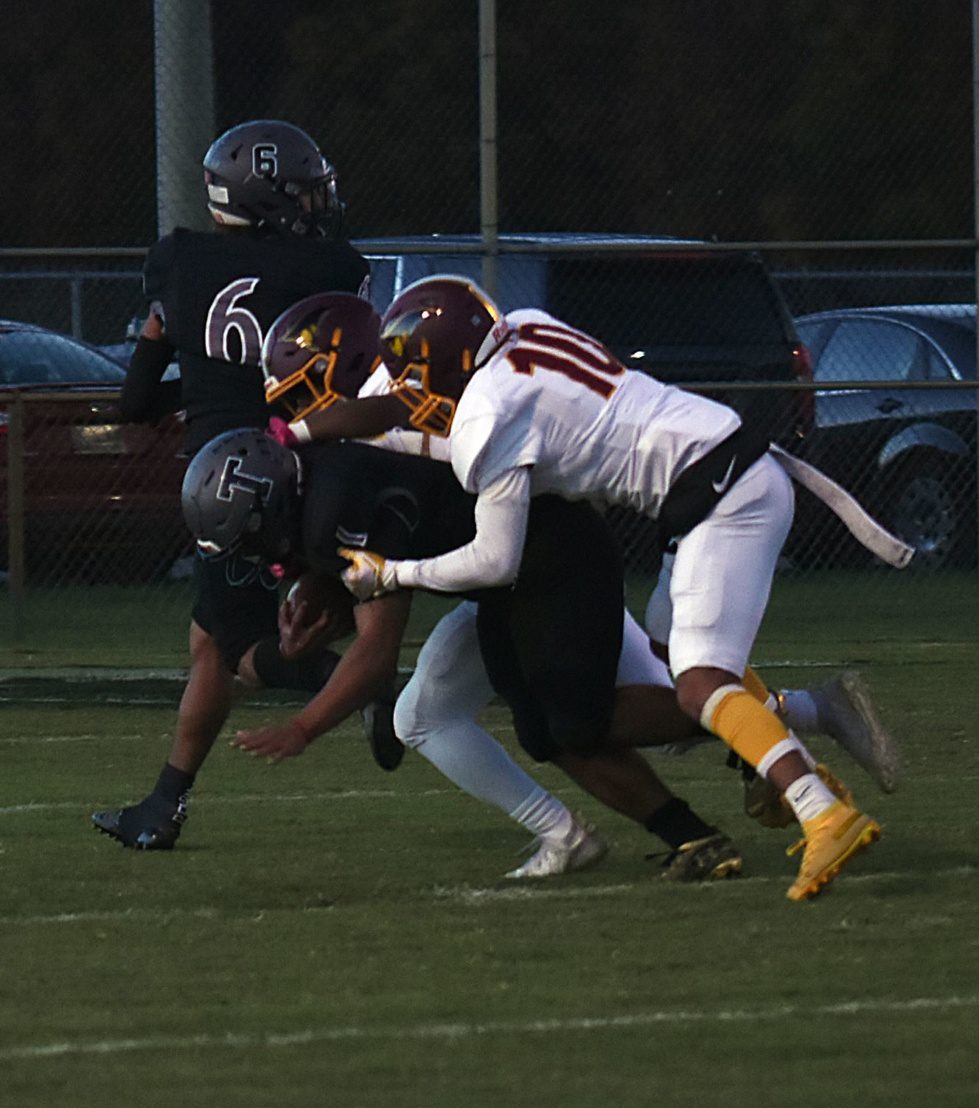 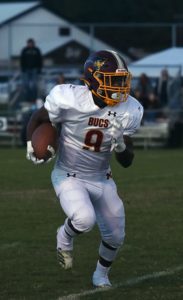 It has been the same story for Milford Buccaneers football this season, it has had a difficult time starting game. With the game shifted from Friday to last night (Monday) due to weather issues, Milford was hoping for something different. “We have had slow starts for most of the year, so I was hoping maybe tonight we would come out fighting from the start. Instead, we slept our way through most of the first half and we really paid a price for it tonight,” MHS Coach Shaun Strickland said.

To say the Bucs were flat in the first half may actually have been an understatement. With Sussex Tech winning the coin toss and electing to receive, it put Milford notice that it had an offensive game plan in place that was meant to punish the Buccaneers. Starting on their 40-yard line, the Raven offensive line dominated the Bucs right from the start. Taking just six plays to cover the 60 yards for the game’s opening score. Every play Tech ran on the evening would be on the ground as it stuck to it game plan and dared Milford to stop it. Just two minutes into the game, Milford found itself down 7-0.

Tech also had a plan on defense as well, simply not allow Milford to run the ball, as a target was squarely painted on Milford senior Aaron Sivels back. Tech was not going to allow him to run the ball at will against them. With Milford finding other ways to move the ball on its opening drive, it looked as if it might be able to respond quickly. However, after driving down to Tech’s 20-yard line, a false start by Milford and a defensive stand by the Ravens defense turned Milford over on downs at its 24-yard line. “That is an example of how we have been taking ourselves out of games, right there we shoot ourselves in the foot and instead of scoring, we are back on defense,” Strickland said.

Once again, the Ravens began to run the ball straight at Milford. While Milford may have missed a few tackles, make no mistake about it, Tech was dictating the pace of play. It would culminate in Tech’s second touchdown of the game with just 17 seconds remaining in the first quarter, Milford now trailed 14-0.

Milford once again would hurt its own cause as on the ensuing possession, senior Shawn Saxon was picked off at the Raven 10-yard line. Once again Tech began running the ball almost at will, with little Milford could do to stop them. Play by play went by and Tech just kept moving the ball down the field. In a drive that lasted six minutes, once again Milford would give up a touchdown, falling behind 21-0 with 2:51 remaining in the first half.

Almost immediately disaster would strike again as Saxon was picked off again, with Tech setting up shop at the Milford 10-yard line. Finally, the Buccaneers defense would stand tall and stop the Ravens at the five-yard line. It was the first time Milford had shown backbone when it counted and with just 55 seconds remaining in the half, and Tech having just one timeout, Milford had a chance to get into the locker room and regroup. However, Milford attempted a pass play on second down which fell incomplete. Then committed a false start before running on third down allowing the Ravens to force Milford to punt from its end zone with 17 seconds remaining in the half. The result would be deflating as Tech blocked the punt and recovered it in the Milford end zone to secure a 28-0 lead as the half came to a close. “That is something we just can’t have happen there. We needed to execute and we didn’t. As a result, we paid a big price for our mistakes,” Strickland said.

The one bright spot for Milford came in the way it played the second half. Taking the opening kickoff right down the field with Saxon connecting with Sivels for a 25-yard touchdown strike as Milford would close the gap to 28-7 with 6:54 remaining in the third quarter. The Buccaneers defense would respond as well, shutting down the Ravens for the majority of the second half. Milford nearly halved the deficit early in the fourth quarter, but an almost sure touchdown pass was not hauled in by a Milford receiver. “We really responded in the second half, that is what this team has yet to do for four quarters. We have to figure out how to put it together for an entire game and we can play like we are capable of,” Strickland said.

Milford would drive into Ravens territory two more times only to come up short. Tech would finally get its ground game going on a 75-yard drive, chewing up almost seven minutes of clock to close out the game.

The loss eliminated Milford from the Division II playoff picture and the schedule has done the Buccaneers no favors as it has to travel to face a 7-1 Caravel team that is already locked into the playoffs and looking to gain a higher seeding. On top of that it is senior night and there is little doubt that Caravel will be looking for some payback after suffering a 24-0 defeat at Milford’s hands last season. With Milford now sitting at 3-4, it is all about pride for at this point. “We will find out who has heart on this team, we have seen some younger guys stepping up during the year and we have to start looking forward to next season. However, even with the quick turnaround I expect us to come out ready to play Friday,” Strickland concluded.