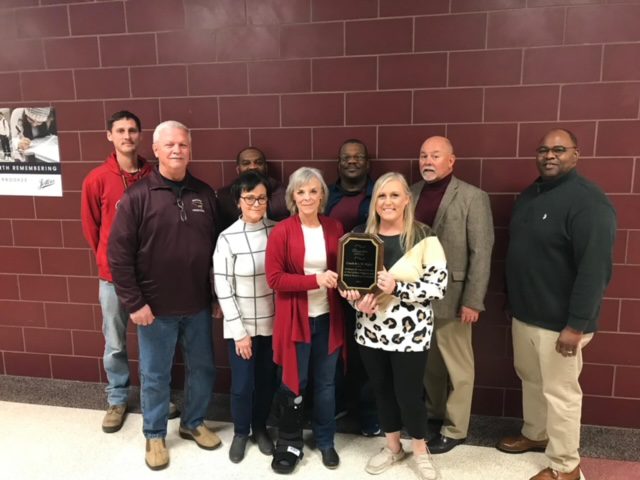 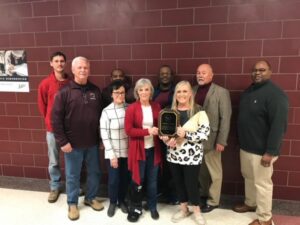 On Wednesday, December 14, Roy Rigby was honored with a plaque by Milford School District for his support of the district’s wrestling team as well as his dedication to helping students reach their full potential. Rigby was head coach of the wrestling team from 1977 to 1982.

“Coach Rigby’s ability to connect with wrestlers of all ages and empower them to reach their potential is an achievement n and of itself,” Athletic Director Nick Brannan said. “The wrestling community in Milford and throughout the State of Delaware benefitted greatly from Coach Rigby’s influence.”

Rigby began working for Milford School District in 1977 and became head coach of the wrestling team the same year. Under his leadership, the team produced 20 Conference Champions, 19 Milford Invitational Champions, 11 State Champions and one High School All American Wrestler. In 1979, the team placed second in the state and a year later earned a state championship. They earned a second in 1981.

Rigby also volunteered as head coach of the Milford Parks and Recreation Little Bucs wrestling program. During his time with Parks and Recreation, Rigby shared his love of wrestling with more children than he could count, teaching them the basics as well as the importance of respect and teamwork. Even after his young wrestlers left the program, Rigby could be found in the stands at matches and tournaments.

“He always told his wrestlers to believe in themselves, their coach and to always be winners whether at practice, a match or in life,” his obituary read. “These lessons were evident, as both his high school and Little Bucs teams, were always known for their outstanding sportsmanship and for the respect shown to other teams, coaches and referees.

Rigby passed away in February 2022. He was born in Dover and graduated from Caesar Rodney High School in 1970 where he excelled in sports but was best known for what was termed the “Rigby Wrestling Dynasty.” His trade was in masonry, working for Delaware Brick and becoming a popular salesperson until his retirement in 2014. Rigby enjoyed spending time with his horses and dogs. He also assisted his brother, Harry, in his masonry business, Rigby’s Masonry well into retirement.