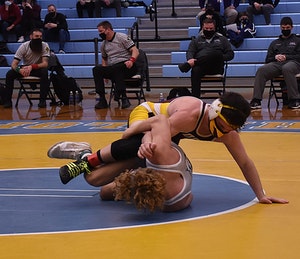 In a wrestling season that many people thought wouldn’t happen, Milford not only had a solid season, but also faired quite well in the just completed Delaware State Wrestling Tournament. The Buccaneers had four wrestlers qualify for the finals, with junior Jack Thode and senior Trent Grant gaining individual tiles. This year with the team championships also being scored in the individual tournament, Milford would finish third in Division I, behind Cape Henlopen and Salesianum. “I was very happy with how we did this year considering all the obstacles we faced as a team. It took a great deal of hard work on the part of everyone in the Delaware wrestling community to pull this off. At the end of the day, it would have been nice to finish higher but considering we really didn’t have any depth in the upper weights, I think we exceeded our expectations,” coach Don Parsley said.

With the consolation and championship brackets completed this past Wednesday afternoon into early evening, Buccaneer wrestlers put on some thrilling matches to gain victories. It all started with the third-place match at 160 pounds, where junior Averi Briscoe took to the mat to battled Cape Henlopen junior Carson Kammerer. In what turned out to be a fascinating match, both wrestlers had their chances in the high-scoring affair. With the clock winding down and the match tied 9-9 and apparently heading towards overtime, Briscoe made a move rarely seen before. With Briscoe standing up and Kammerer on the ground, Kammerer dove for Briscoe, attempting a take-down. Briscoe jumped out of his opponent’s reach and flew on top of him to gain two points and the victory as the clock struck zero. The move drew sounds of disbelief and then a huge cheer arose from the crowd. “That’s something you rarely see in a match,” Coach Parsley said. “You see kids kind of goofing around with it in practice, but it’s simply something that isn’t done in a match. For Averi to pull off a move like that, with third place on the line was astonishing.” 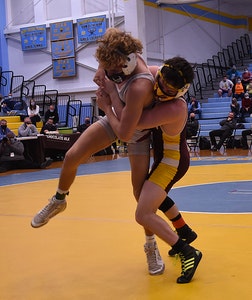 With the championship round starting promptly at 6 p.m., Milford’s first shot at a title would come at 113 pounds, where Milford eighth grader Trevor Copes battled junior and top seed Gabe Giampietro of Smyrna. While Copes gave it his best, his Smyrna rival was in control of the match, winning a major decision 8-0. While disappointed, Copes was pleased with his overall performance in the tournament. “Of course you want to win, and I gave it my best. Gabe is an outstanding wrestler, so I knew I had my hands full. But thinking about it, to compete in the State Tournament and come out with second place, is something I can build on going forward, I will become a better wrestler because of this,” he said.

In the 120-pound title match, Milford senior Corey Messick would face off against top-seeded sophomore Luke Poore of Caravel Academy. While both wrestlers entered the match undefeated during the regular season, it would be Poore who would control the match from the outset, with Messick on the defensive for most of the match. While Messick had a few chances, Poore’s style and control would prove too much for the Buccaneer, who would fall via a 5-0 decision “I knew it was going to be a challenge going up against Gabe, he is so technically sound, it’s hard to get an opening. In the end, all I can do is congratulate him and move on,” Messick said. 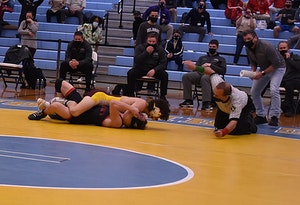 The Buccaneers would gain their first title of the evening at 126 pounds, in a tense affair between junior Jack Thode of Milford and junior Dylan Knight of Caravel. Once again, it would be a battle of undefeated wrestlers during the regular season. With each wrestler scoring a single point during the match, the contest would enter overtime. There, neither wrestler could score, setting up the ultimate tiebreaker scenario. In the ultimate tiebreaker, it comes down to a quite simple format. The wrestler who scored the first point of the match has the choice to be on the bottom or the top. The wrestler on the bottom must escape within 30 seconds to win, if not the wrestler who is on tops gains the victory. With both wrestlers nearing exhaustion, it was up to Thode on how to proceed, he chose bottom. Almost immediately after the referee sounded his whistle, Thode moved forward and escaped as if he was shot out of a cannon, earning the title. “It was a very tough decision and Coach Parsley made it clear that it was mine to make. The more I thought about it, the more I felt it would be better for me to try and score the point to win the match. Once I made up my mind to do it, I knew I had to do it quickly or else I would be in trouble. Knight is fantastic, so I figured I would only have one shot at winning and I was able to do it,” Thode said.

The final championship match for Milford would feature senior Trent Grant battling William Penn sophomore William Sinclair. In a match that had almost everything in it, Grant would find himself trailing 11-8 with just over 30 seconds remaining in the match. In a match that witnessed Grant missing on a few key scoring opportunities, he needed points and he needed them quickly. “I had missed a few chances to score, but I really did feel like I had time to win the match. I could feel him getting tired, I just needed to stay calm and execute,” Grant said. Execute would be just what Grant would do, reeling off five points in those final 30 seconds to vanquish Sinclair. It was a thrilling end to his time at Milford and one that Grant will always cherish. “When you wrestle, you always dream of earning a state title. To do it in my final match, coming from behind like that is something I will remember for the rest of my life,” he said. 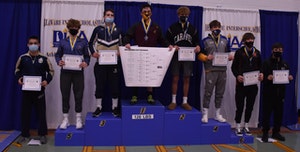