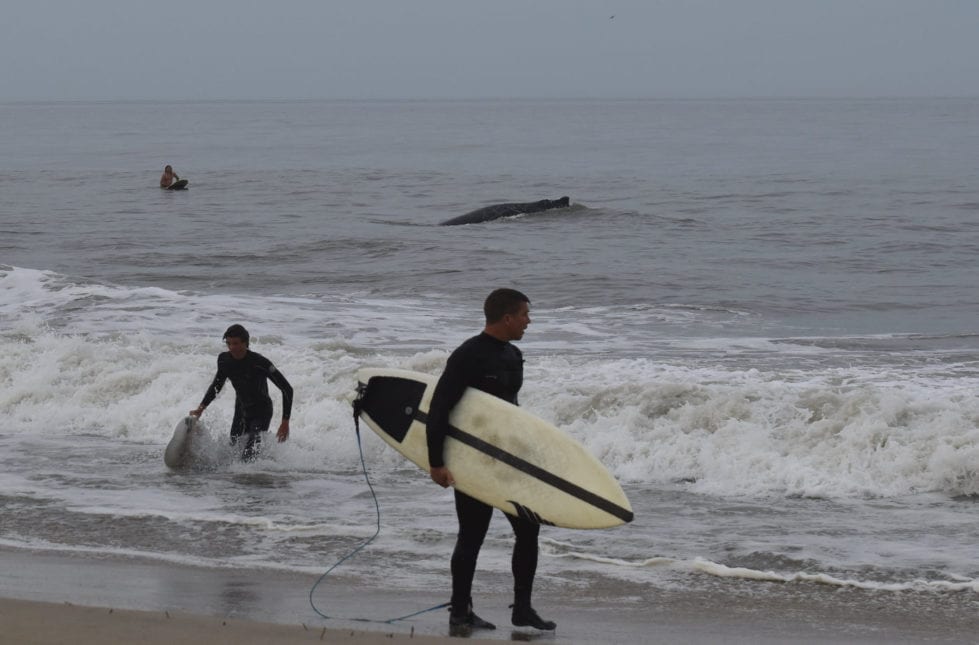 Surfers, dolphins and a whale shared the waters off Cape Henlopen Saturday. Photo by Mike Powell.

A special guest had a whale of a time with surfers at Cape Henlopen State Park over the weekend.

Surfers and the whale, along with several dolphins, enjoyed the bounty provided by Tropical Storm Ana, the first named storm of the season.

“It was indeed very exciting to see the surfing and whale at the same time,” Powell says.

University of Delaware Marine officials say it’s not uncommon to see whales so close to the shoreline, and it was likely feeding.

Dolphins are a common sight along the coast, especially at Cape Henlopen State Park.

Tropical Storm Ana passed well to the west over the ocean with little disturbance inland, but stirred up rip currents and strong waves along the Maryland and Delaware coast line.

After several rescues by the Ocean City Fire Department, officials there issued warnings to visitors to not swim due to the dangerous conditions and no lifeguards on duty. Rehoboth Beach Patrol is also warning swimmers to stay out of the water.

The whales and dolphins didn’t seem to mind a little commotion in the ocean from a storm.

The National Hurricane Center is predicting higher than average activity this year, with 13 to 20 named storms.

A whale swims in the water off Cape Henlopen Saturday. Photo by Mike Powell