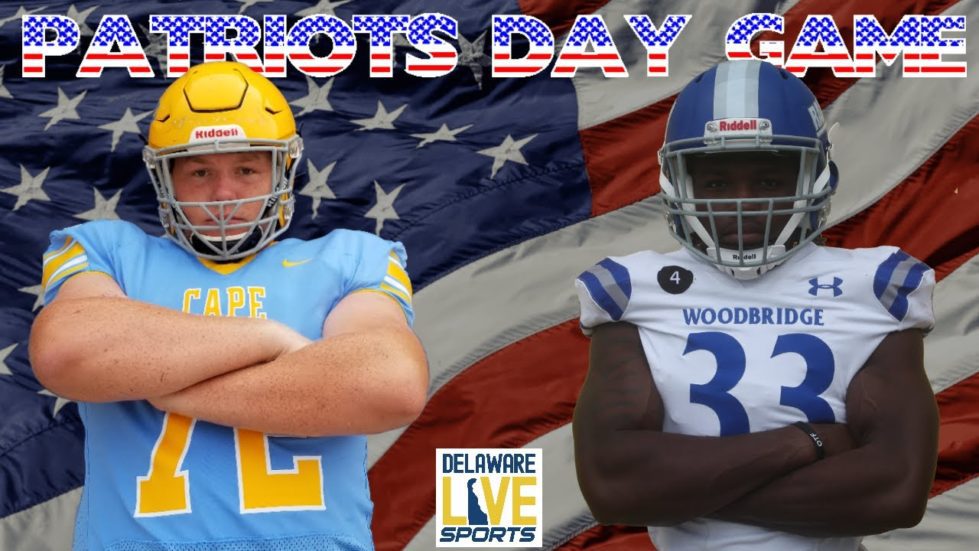 Cape Henlopen and Woodbridge played against each other fro the first time in 44 years, Woodbridge won 35-21

Greenwood – Cape Henlopen visited Woodbridge in the first football game between the two schools in 44 years.

What ensued was a back and forth battle before the Blue Raiders would roll off 21 straight points in the fourth quarter to win their home opener 35-21.

Late in the first quarter the Woodbridge defense forced a turnover deep in Cape territory when Ben Carter’s hit separated the ball from receiver Daniel Saez on a screen pass, Prince Thompson intercepted the ball and raced to the Cape Henlopen one yard line.

Two plays later Kenny Newton scored the first of his three offensive touchdowns with a one yard one. Newton converted the two point conversion and Woodbridge led 8-0 with 31 seconds left in the first quarter.

Newton rushed for 148 yards on 22 carries in the game with scoring runs of 42 and a pair of one yard runs.

“Coach Dooley talks about finishing and that’s what we did tonight, we finished in the fourth quarter,” Newton said.

The Vikings would respond late in the half when quarterback Hank D’Ambrogi scored on a one yard plunge with 1:25 to play in the first half. The conversion run failed when Woodbridge recovered a fumble in the endzone. The Blue Raiders took an 8-6 lead into halftime.

Cape Henlopen would continue the trend of late in the quarter scores when Jordan Baines went into the endzone from one yard out to give Cape the lead with 1:01 left to play in the third quarter.

Daniel Saez converted on the two point run and the Vikings led 14-8.

“Cape took the momentum from us in the second and third quarter, I am proud of the way our kids finished the game strong,” Dooley said.

Woodbridge would then score their first of three straight scores midway through the fourth quarter.

On a first and ten quarterback Seth Smart connected with Colin Hastings on a 58 yard play action pass for a touchown with 7:57 to go in the game.

The Cape Henlopen defense would stiffen and deny Newton of the endzone on the conversion attempt tying the game 14-14.

After forcing a Cape punt on the Vikings ensuing drive Woodbridge would put together a four play 42 yard scoring drive capped off by a one yard run by Newton.

Newton converted the two point run giving the Blue Raiders a 22-14 lead with 5:08 to play in the game.

Just 38 seconds later Newton struck again returning an interception 40 yards for his fourth touchdown of the game. Cotton Collins added the point after kick as Woodbridge extended their lead to 29-14 with 4:30 to play.

After forcing the Vikings to a three and out Newton would add his third touchdown of the fourth quarter on a 42 yard run up the middle. The kick failed giving Woodbridge a 35-14 lead with 2:54 left in the game.

On the ensuing kickoff Baines would go 86 yards for a touchdown, D’Ambrogi’s kick close the score to 35-21.

Woodbridge amassed 267 yard of total offense with 201 coming on the ground.

The fourth quarter explosion was reminiscent of several Woodbridge comeback victories over the past few season.

Newton said that Woodbridge always plays tough in the fourth quarter for the late Troy Haynes.

“Troy (Haynes) is always with us and he was here tonight the whole game, it’s the number 4 and the fourth quarter we go crazy,” Newton said.

“We talk about the fourth quarter all the time and these kids do play for Troy and I think that is inspiring to have someone that meant that much to you,” Dooley said.

Woodbridge will travel to St. Mark’s Friday night in a battle of Top 5 ranked teams in Class AA.