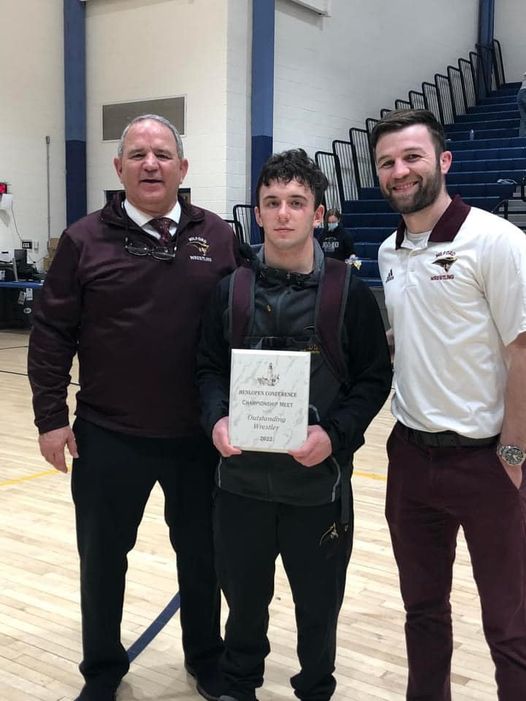 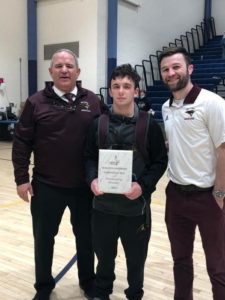 Last year it was simple to qualify for the state of Delaware individual wrestling tournament. With COVID peaking and a portion of the wrestling season wiped out, it was simply a matter of common sense to make the tournament open to all when conference qualifying tournaments were not held. In order to qualify for the Individual tournament this year, you must either finish in the top four of your conference or be selected as one of four at large bids. Needless to say, the competition was riveting.

Following a first-round exit from the Division I Dual Meet State Championships, the Milford wrestling team turned its eyes to the just concluded Henlopen Conference Championships. The meet, held at Sussex Central last week proved to be a solid one for the Buccaneers, in what is arguably considered the top wrestling conference in Delaware. At the forefront for the Buccaneers was senior Jack Thode, who won all his matches by pin and was named the tournament’s outstanding wrestler at 132 pounds. When talking to Milford coach Don Parsley, he was very impressed with how Thode wrestled.  “His time was short, he won four matches with four pins, so that is something to be recognized. He has also won four Henlopen titles over the years, so that may have played into the recognition as well.”

Fellow senior Aaron Briscoe at 138 pounds was the other Henlopen Champion for Milford as he made it easily to the finals before a hard-fought match with Camron Cataldi of Caesar Rodney. In a back-and-forth match, Briscoe would come out with a narrow 7-5 victory. “Aaron is really starting to light it up at the right time, he just needs to keep on working hard and if he does, he should have a good showing at states,” Parsley said.

The Buccaneers would end up placing five wrestlers in championship matches, but only had Thode and Briscoe to win titles. That will mean little this week as the Bucs’ other wrestlers who qualified for states are quite capable of improving. A prime example could be Milford freshman Trevor Copes, who made it to the finals but forfeited due to injury. He has been improving as the season has gone on and could be a significant factor at 120 pounds. “We are really hoping that Trevor will be ready to go this weekend. We just have to see how quickly he can heal up,” Parsley said.

Junior Vincent Jenkins is another Milford wrestler who has been consistent this season and made it to the finals at 113 pounds. While he fell by pin very late in the 2nd period to Sussex Central sophomore Chase Murray, hopefully the experience gained in the pressure-packed tournament setting will serve him well at states.

Milford’s other second place finisher was senior Tim O’Hara at 160 pounds who lost a close 6-4 decision to Charles Fritchman of Cape Henlopen. This showed a great deal of improvement for O’Hara, considering that he lost 7-1 earlier this season. “It was good to see Tim close the gap, hopefully he is hitting his stride at the right time. No matter what, you know that Tim is always going to leave everything out there on the mat,” Parsley said.

The only other Milford wrestler to qualify for states was junior Averi Copes at 152, who wrestled-back and won his third-place match. “Averi is another guy who always brings his best, he wasn’t 100%, but he is not the type to make excuses. Hopefully, he will be at the top of his game this weekend,” Parsley said.