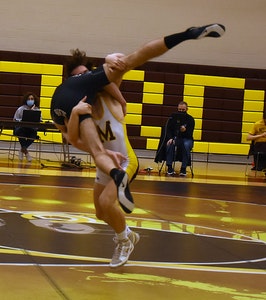 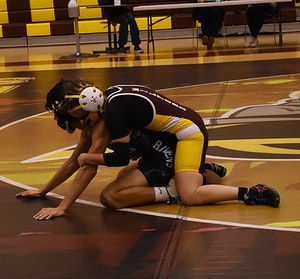 This past Friday night, the Milford wrestling team completed its regular season as it hosted Sussex Tech. After dropping the meet’s first match at 106 pounds, the Buccaneers began to roll, as has been the case most of the season. 8th grader Trevor Copes of Milford would win by forfeit at 113, then the parade of pins would begin. 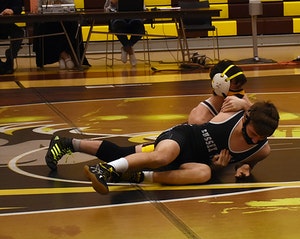 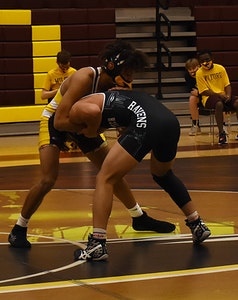 The Buccaneers would come right back however, with senior Rafael Mejia winning by fall at 195 pounds. The final Milford win would come at 220 pounds as freshman Jordan Curry would earn his first varsity win with a fall at the 3:38 mark of his match. With the win, the Milford bench exploded, showing great joy for the underclassman who had worked so hard this year and just kept coming up short. 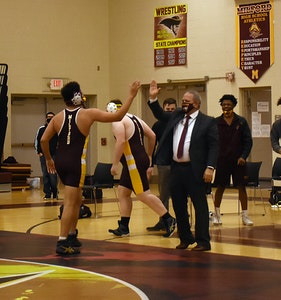 “Listen, a lot of people don’t know what it takes to participate in this sport. Jordan has worked so hard as a freshman and his teammates knew it. By no stretch of the imagination is it easy to go out, meet after meet and not win. Jordan didn’t let not winning get him down, you could see him gradually improving. For him to get the win tonight, was like a victory for all of us, we know how hard he has worked,” Coach Don Parsley said. 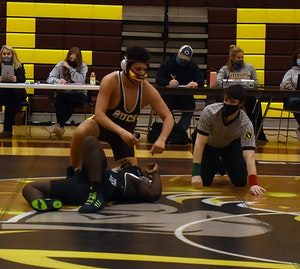 The match’s final score would be a decisive 63-17 victory for Milford, who closed out the regular season with an 11-2 record. In a normal year, the Buccaneers would be getting ready for the State Dual Meet. As we all know however, this is not a normal year. What is on deck for Milford, as well as all of Delaware is what promises to be a wild State Meet, with every wrestler in Delaware eligible to compete. The DIAA will not only be crowning individual champions, it will use a point system in the double-elimination tournament to determine the Division I and II champions. “It’s been a crazy year, and I am thrilled we were able to get as many matches as we did in. There were lots of hoops to jump through, there were obstacles, but somehow we had a season, now we get to have a State Tournament that promises to be very exciting,” Parsley said.

Brackets will be doubled from the usual 16 to 32, with “pigtails” for weight classes that have more than 32 entrants. The top eight in each weight class will be seeded, but after that it will be a free-for-all, with many twists and turns. 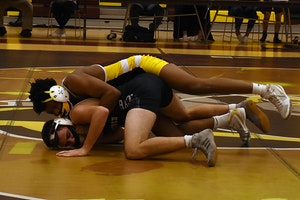 While which wrestlers will be wrestling in which weight class has yet to be decided for Milford, keep an eye out for Thode, who won the State title at 120 pounds last season. Also, Grant garnered a second-place spot at 126 pounds last year and look for Grant to be in contention as well. Although only an 8th grader, Trevor Copes has put together a 10-1 season and should be seeded. O’Hara and Avery Copes, Ryan or Raphael Mejia are also wrestlers to keep an eye out for. “Our guys have been working hard, we have two weeks to prepare and it’s my job to get them ready for the tournament. We have some work to do, but I am hoping to have everyone at the top of their game in two weeks,” Parsley concluded.