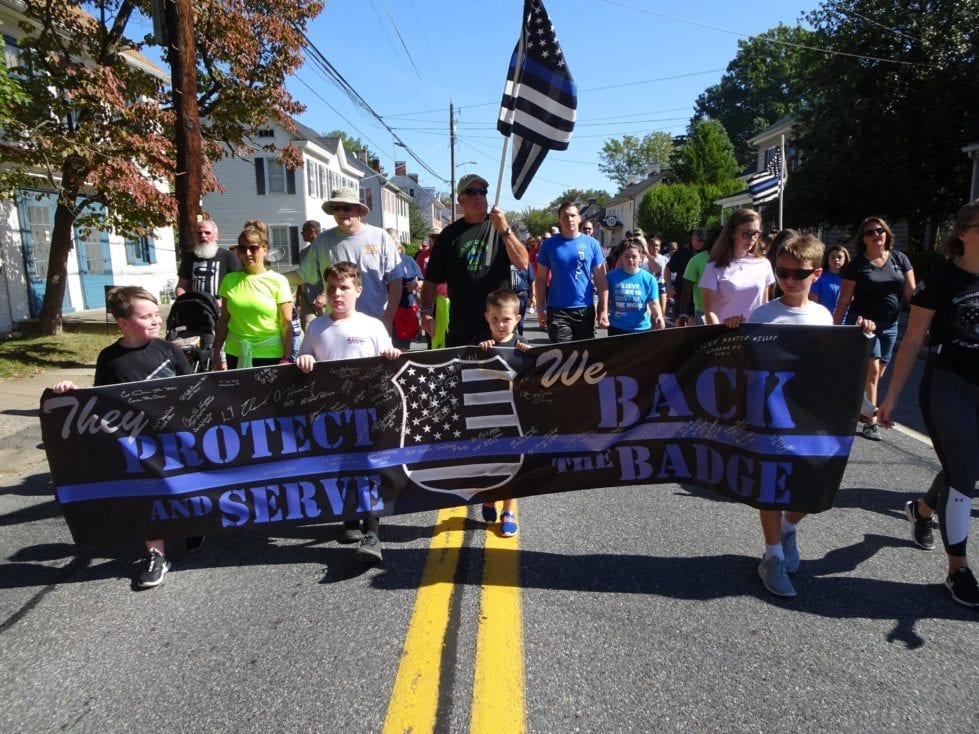 A Walk in Their Shoes has a mission to reconnect law enforcement and the community.

In 2015, Susanne Whitney and three other women put together a 1 Mile Walk/Rally in Camden in an effort to show support for law enforcement officers. Out of that walk, A Walk in Their Shoes Foundation was born.

“Our mission is to enhance the relationship between law enforcement and community by fostering a better understanding of police, their perspective and the perils they face,” Whitney said. “We seek to enhance this relationship through education, programs and public functions. We had become upset with the way law enforcement was being portrayed and attacked, both in the media and physically. We decided we would put together an event and, within the next two weeks, held the first event with over 300 people in attendance.”

Because of the community support, Whitney decided to host an event every year, hosting a rally in Dover in 2016, 2017 and another in 2019 in Camden. She incorporated A Walk in Their Shoes as a 501(c)(3) with a goal to host more events in order to bridge the divide between law enforcement and local communities.

Whitney is a Delaware native, living in Kent County her entire life. She graduated from Lake Forest High School and holds two bachelor’s degrees, one in business and one in accounting, from Wilmington University. She is a criminal defense paralegal who has worked in the field for the last 17 years, although she has been a paralegal for 21 years. She also works several part-time jobs. She has two daughters and four grandchildren. Her youngest daughter, Cassie, is Vice President of the organization and is married to a North Carolina correctional officer.

So far, in 2021, the organization has held a vigil in Dover for Corporal Keith Heacook who died in the line of duty in April, and she is working on the annual Walk/Rally which had to be cancelled last year. Whitney is also working with a local police officer to put together some small classes and workshops for the community on subjects that include dealing with conflict in society, active shooter safety in the workplace or while out with your family, CPR and first aid, plus others. A Walk in Their Shoes Foundation is planning a 5k and has been contacted by law enforcement agencies to put on additional events.

A recent Walk in Their Shoes event

In 2020, the organization hosted Law Enforcement Appreciation Day, raising over $6,500 which were donated to police chief councils for repairs and maintenance of the Delaware Law Enforcement Memorial which was damaged. They were also the co-organizers of the TJWStrong Facebook page, working with other organizations to raise money for the Webb family after he was shot during a federal warrant service in December.

“Although every profession has issues, our law enforcement community seems to be the popular target of late,” Whitney said. “Social media and internet news is so instantaneous that decisions/judgments are made often without having or verifying facts. Our officers are tried and sentenced in the court of public opinion without any opportunity to defend themselves. As a result, they are now frequent targets. A lot of good officers are being injured and killed for no other reason than a small group of society has decided that they are all bad. A lot of the information that circulates about the law enforcement community is based on ignorance of what our officers actually do or can do. I hope, with this foundation, to be able to teach our communities how law enforcement actually works as well as keeping the lines of communication open between the general public, our law enforcement agencies and our governmental representatives. All professions can be improved, but if you are not willing to learn and aid in that effort, things will not change.”

Whitney believes it is a very small group making the most noise against law enforcement officers and hopes her organization can demonstrate to law enforcement that the majority of people do care and appreciate what they do. She hopes to provide an outlet for the majority to consistently speak out in support of law enforcement, not only when there is a crisis.

“Our officers are the barrier between good and evil,” Whitney said. “Without them, there is chaos. As a supporter, I do my best to make sure that the information is out there so that our officers can be effective and we, the public, can be safe. We also want to be sure our children have good, positive contact with law enforcement, which can be done with interaction with them. In a nutshell, I am very passionate about showing support and being there for our law enforcement. It has been a struggle of late, I have to say. The “anti-cop” noise has been too loud, and I have frequently wondered if it is even worth it to keep speaking. Is anyone really listening? In the last few weeks, I have been contacted by numerous law enforcement officers as well as supporters, thanking me for what I and A Walk in Their Shoes has been doing as well as reminding me that people are listening. This is what keeps me going. This is why I do what I do and will continue to do so.”

More information about the events planned by A Walk In Their Shoes can be found on their Facebook page.