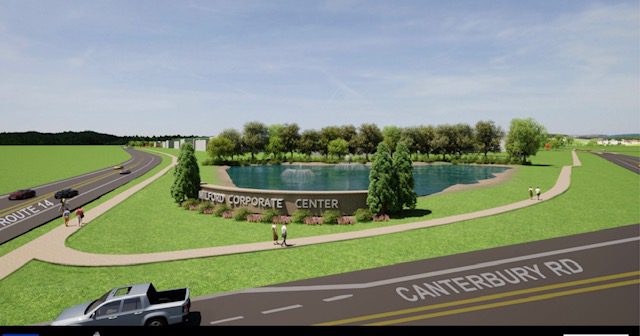 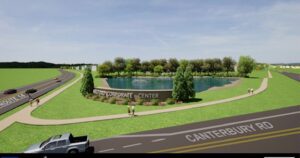 At a recent board meeting, Milford City Council heard an update on the Milford Corporate Center which is planned for the Fry Farm property, located at the corner of Milford Harrington Highway and Canterbury Road, the city purchased last year. The new center will offer warehouse and office space. The update was after a workshop meeting, open to the public, designed to get input from residents who live in the area as well as the rest of the community regarding design of the new facility.

“We’ve had a number of meetings, talking about access, traffic, road improvements, etc.,” Mike Riemann of Becker Morgan, said. “Those conversations have gone very well and actually tied really well into the workshop we had on the 27th at Public Works. It was pretty good attendance; I think we had about 30 plus people and got good feedback. I don’t think we got any feedback that changed the overall design of the project, but we did get good feedback.”

One of the requests received was that there be no access to Church Hill Road from the new complex and Reimann stated that it appeared that request was unanimous across the board. Some of the residents with property that borders the area to the north and west questioned how much of a buffer would be between their lands and the complex.

Rendering of potential roundabout at entrance to Milford Corporate Center

“We did talk about establishing a 100-foot buffer all the way around this property, so the minimum is actually 100 feet, and it widens from there. That was unanimous feedback as well. The pedestrian path we talked about at the last council meeting, having a pedestrian pathway that loops the entire property that would actually circle the entire property. We got some good feedback from some of the neighbors about where the sidewalks are located, not wanting them adjacent to their property. They suggested putting them on the other side of the buffer and this plan does accommodate that.”

One change made from the last presentation to council was to the lots along Milford Harrington Highway, Reimann explained. The lots were reduced in depth as those lots are targeted for office spaces rather than warehouse spaces. This means the reduction in depth would not impact the size of the buildings significantly. The next step requires the city to undergo further review with the state, especially with DelDOT. The current plan is that the entrance to the complex would require a roundabout in the area of Airport Road. In addition, there are several water features planned to improve the aesthetic of the complex and to provide additional drainage. 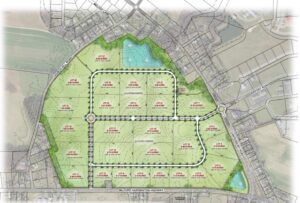 “I did attend the workshop and I think it was well attended,” Councilman Jason James said. “There were maybe two or three, maybe five empty seats. These boards that you see were all around the room and there were representatives stationed where the people that were there from Church Hill, Bowman, all the areas, could see and go around to get a close up look and ask questions while they were there. And all of their questions were answered. I was able to listen to some of the dialogue and it seems as though at least major concerns, like whether a property would flood, would there be a fence here, what would the stormwater pond be, wet or dry, all of those questions were answered. In my observation from the crowd, they were not opposed. There was actually some enthusiasm in the air, maybe because they were able to aske their questions live and they were at ease because it wasn’t going to be just some industrial park invading their space, that no one cared what it looked like. They were happy to hear there would be a lot of trees. Mark, I told them we brought an arborist on and had a new tree committee for new developments and that made them happy.”

Reimann agreed, believing that the type of workshop they opted for was more informational and allowed people to walk around talking. It was not people sitting in seats listening and being unable to say anything. He stated that, in those types of meetings, when asked if there are any questions, no one speaks up but with this format, people are more likely to say “I don’t like this” or “I wish you could do this or that.” Councilman James also pointed out that it was stated often that residents would have the opportunity to attend Planning and Zoning as well as council meetings as the project moves forward.

“I agree with Mr. James,” Councilwoman Katrina Wilson said. “I’ve heard a couple of different things, the same old thing, traffic. That is always a major concern. What I tried to explain is having this property is something the city has had an eye on for a very long time. It could have been many, many things as far as houses and it seems like a lot of neighbors don’t want more housing so I’ve just been trying to explain that this is an opportunity for Milford to grow. If it’s not going to be this, it was going to be something else eventually. So, jus trying to make people get comfortable with positive growth that is going to benefit our town in the long run.”

Councilman Andy Fulton commented that he had heard outside the workshop that residents were happy that there would be no access on Church Hill Road and that they were pleased with the aesthetics. Councilman Brian Baer asked if the roundabouts would be okay with truckers driving 18-wheelers as well as improvements to Airport Road heading out to Route 1. Riemann explained that the roundabout would be designed to fit large trucks and that they did anticipate some improvement to Airport Road in the future.

“From Route 1 to the proposed site, you’ll have people exiting the highway at the car dealership, trucks exit the highway near there and driving down that road,” Councilman Fulton said. “That road will need major upgrades in order to support heavier truck traffic through there because that’s a fast track from Route 1 to the business park.”

Councilman Todd Culotta felt that most trucks would remain on Route 113 and turn on either Airport Road or use Milford Harrington Highway to get to Canterbury Road before taking all those turns using the exit at the car dealership on Route 1. Councilman Fulton suggested that the potential for large trucks exiting at Thompsonville Road was something to be considered during the planning stage.

“I just hope sometime before I leave this Earth, between the City of Milford and legislators, we strongly consider putting sidewalks on Airport Road,” Councilwoman Wilson said. “I mean it has been a need and a want out there for years. It was long before there was an apartment complex, a doctor’s office, a Boys and Girls Club and a hospice center. We have all these wonderful things and we still have not gotten sidewalks.”