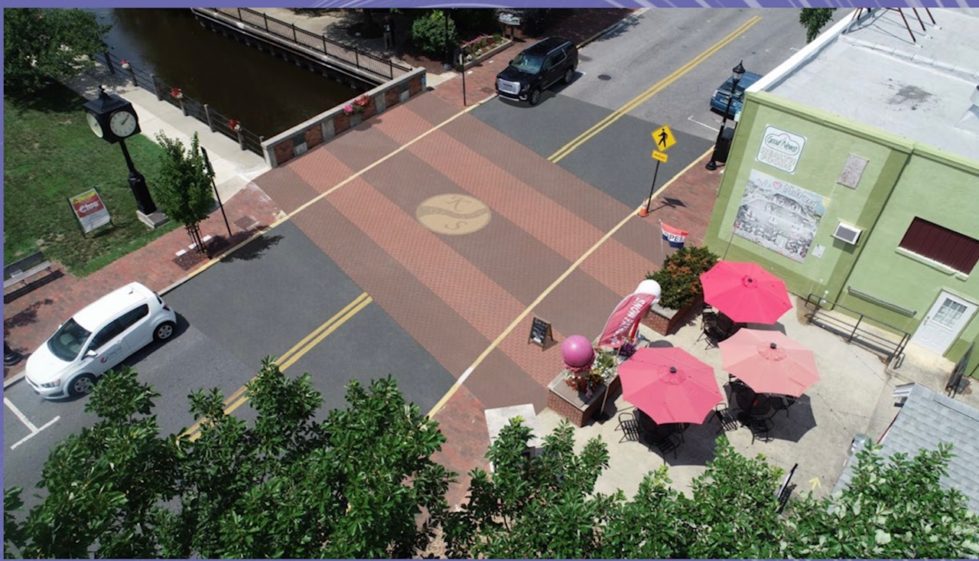 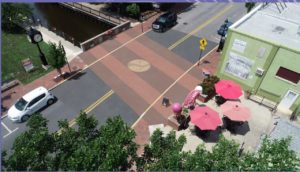 At a Council workshop, City Manager Mark Whitfield and Public Works Director, Mike Svaby, provided Milford City Council with a preliminary design for the Walnut Street bridge. The goal is to create a speed deterrent, a pedestrian crossing and ADA access on the bridge.

“I believe I started working on this probably four years ago,” Whitfield said. “It would link the Riverwalk on both sides and create a focal point for the center of town. We had a local artist participate in the project and have been dealing with DelDOT regarding what we can and cannot do.”

Svaby began his presentation with a photo of what the bridge looked like presently, pointing out that it looked dated and, although it was sufficient and functional, there had been requests to create a more attractive downtown focal point.

“We’ve had some pretty sophisticated graphic design in the way of renderings,” Svaby said. “We’d like to have a textured surface and we would add ADA accommodations which will also be recognized in our ADA transition plan. The key to moving forward is to close out the design activities with final details that will include DNREC and DelDOT, of course. We’re going to identify funding to drive down exactly how we will pay for it.”

Councilman Todd Culotta asked if the textured surface would be pavers and Svaby explained they would actually be stamped concrete. Councilman Culotta suggested outlining and marking where the center said Kent and Sussex County would look nice.

“We can always enter final design details to make sure that the seal actually identifies that difference,” Svaby said. “I think that was the intent. This is just a general rendering. The challenges we face here is we’ve got different agencies involved when we begin to work, the final design in the materials related to it. We’re going to have to work closely with DelDOT because of the weight and the original construction of the bridge. It’s not a demolition of the bridge in its entirety, it is just down to base layers. We have to be attentive to the materials we’re putting on and what kind of weight the base construction of the bridge can support.”

In addition to working with DelDOT, Svaby explained that they would also have to work closely with DNREC.

“There is concern about debris in demolition of the top layers of asphalt falling in the river,” Svaby said. “So, we will be working closely with DNREC to make sure the waterway is covered and secured so nothing falls in there in the process of clearing out the old paving and concrete.”

Cost is another factor, according to Svaby. The initial cost estimate was a little low and the capital budget line item for the upgrades is $425,000. The higher amount came from escalators related to supply chain difficulties and COVID-related employment. Svaby is also concerned about the availability of contractors for a project of this magnitude.

“I might add that there’s a lot of interest from a number of different agencies in this project and that it’s the center focal point to the downtown,” Whitfield said. “It has an ADA component. It has an art component. It has a parks component in that we’re joining two sections of the Riverwalk. It has a traffic calming component in that it is a raised deck and will act as a speed deterrent. So DelDOT has been very much interested in this project. And I think one of the next hurdles for us, obviously, we welcome any support that you could give us in securing additional funding, whether it’s through DelDOT, our state legislators or other sources, DNREC, parks. I think it’s an exciting project. Again, it is a focal point for our downtown. Our next job is to sell the project to all the different agencies and secure additional funding to see it happen.”

Councilman Culotta suggested that using pavers would provide an opportunity to sell sponsorships as a way to finance the project. Svaby stated that it is possible another municipality had used pavers over stamped concrete which could be included as part of the bid process.

“My only reservation is that it is going too slow,” Councilman Jason James said. “I would like to see this project accelerated.”