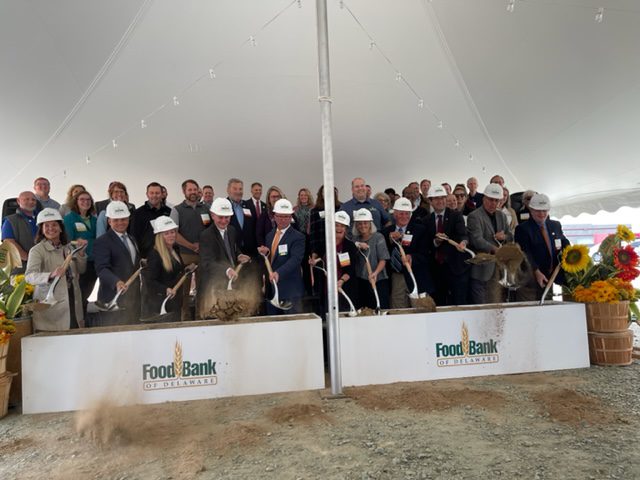 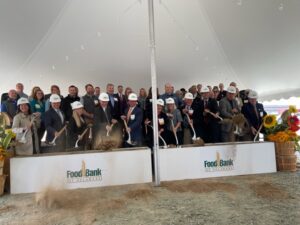 Legislators, dignitaries and donors were on hand Thursday, September 29 in order to break ground on the new Food Bank of Delaware location in Milford. The new building will be constructed in the Milford Industrial Park across Airport Road from the current location and will include additional instruction space, larger volunteer areas as well as a community garden.

“Our campaign to build this new building is more than about bricks and mortar,” Andy Larmore, Chairman of the Food Bank of Delaware, said. “It is about changing lives. Today, we start to build a new future for our community. This new building and the work we do would not be possible without our community, generous donors and volunteers w ho give the gift of time and the elected leaders who believe in our vision.”

Terry Pepper, President of Kent County Levy Court, pointed out that the Food Bank was especially beneficial during the COVID pandemic, providing food to many Delawareans, especially children, who may not have been able to eat without their support. He also provided a visual explanation of just how much the Food Bank of Delaware had done to fight hunger in Kent County.

“For the past year, the Food Bank has distributed 4,271,000 pounds of food in Kent County alone. That is unbelievable,” Pepper said. “I’m a visual type person. My favorite vegetable is corn and if break that down to a can of corn that weighs about 4.5 ounces, and you break down that 4,271,000 pounds provided to Kent County, that gives you over 68 million ounces of corn. Now that can of corn is about four and a half inches tall. So if you multiply that out, that gives you 5,695,896 feet. So even farther by miles, 1,070 miles. To put that in perspective, that is 100 miles on the other side of Disney World. That’s how far that can those cans of corn will go laid end-to-end.”

Michael Vincent, President of Sussex County Council, explained that he grew up in a home with a single mother and a grandmother who raised him, but he never remembers being hungry or what it was like to not have food. He acknowledged that the Food Bank did a tremendous job of helping families who did experience hunger or lack of food. He stated that more than 16 million pounds of food had been distributed throughout the state by the Food Bank over 46,234 volunteer hours and that 39 food workers had graduated from the culinary programs.

“As President Vincent said, I haven’t woken up a morning in my life when I was hungry and didn’t have food to eat,” Matt Meyer, New Castle County Executive, said. “But there are quite a few Delawareans even today, who do. The Food Bank’s been there for most of my life, in New Castle County, across the state even here in Milford for the past 27 years serving the community. But what we learned during COVID was something extra. I know many of you, maybe all of you, were out there to see those food lines. I remember standing one day at Del Tech campus up in Stanton and looking and saying “this is like the pictures I saw of the Great Depression.” The long, long food lines and Food Bank was there. We’re learning it is so much more than food and the Food Bank has been doing it for a long time.”

Meyer recalled talking to someone from the National Association of Food Banks at an event and asking if the Delaware food bank was as good as he thought they were.

Senator Dave Wilson pointed out that the Food Bank of Delaware was second to none, offering culinary training and implementing deliveries through DoorDash. First Lady Tracy Quillen Carney, who champions the fight against childhood hunger, also spoke at the event.

“I’m sure we’ll say at least a little about yesterday’s White House Conference on Hunger, Nutrition and Health along with another guy who spoke, the President,” First Lady Carney said. “We had a small conference watch party at Woodburn, the Governor’s house in Dover with members of our statewide Task Force on childhood hunger. A proud partner of the Food Bank, that task force is known as ECHO which stands for “End Childhood Hunger Oh” because we couldn’t think of anything for the O. Many statements from yesterday’s conference stood out for me. One was the famous line about how “giving is not about the redemption of the giver. It’s about the liberation of the receiver.” And, and it just a little issue with that. Because I think giving is about the liberation of all of us. It is a privilege to be invited into people’s lives in a way that connects rather than divides us which Senator Wilson addressed.”

The First Lady also pointed out that the pandemic opened eyes to the problem of hunger in the United States and that organizations like the Food Bank of Delaware would be instrumental in helping end hunger once and for all.

“Each morning I wake up excited to go to work. I love what I do here. I love the people that I work with. I know just by waking up I’m going to change a life. That’s a pretty powerful thing to be able to say. We change lives one meal at a time, one person at a time. I’ve often said that the day I wake up without hope is the day I don’t get out of bed. I don’t wake up without hope. Not here because look at all of you that are here with us,” Cathy Kanefsky, Chief Executive Officer of the Food Bank of Delaware, said. “Making a change, committing to helping us just by being here. You’re putting your stamp of approval on what the Food Bank is all about and the work that we do. This week has certainly given me a lot of hope.”

Kanefsky also attended the White House Conference on Hunger, Nutrition and Health, repeating a quote from President Joe Biden who said “if you can’t feed your child, what the hell else matters,” a sentiment Kanefsky agreed with. She commented that when a parent cannot feed their child, they have difficulty focusing on anything else in life. For this reason, President Biden has announced a goal to end hunger in the United States by 2030.

“The plan is more than that. It calls for increasing healthy eating and physical activity, improving access while integrating nutrition and health and empowering all consumers to make and have healthy choices,” Kanefsky said. “One comment that really resonated with me was that we need to provide people with what they need and what they want, not what we have. And that’s a nuance that you will see our team starting to address over the next couple of years. We are almost dictated sometimes in what we put in the boxes that go out to folks and is it nutritious? Sure. But somebody is really tired of getting beans. And that’s what we continue to give the people, we give them the same thing over and over again. And none of us want to eat the same thing over and over again. Unless it’s pizza then maybe, but I might get tired of pizza eventually. But that’s what we do. And somehow, we’ve kind of taken away the dignity and the respect that people deserve because they’re hungry. We expect them to take what we give them. We put it in their trunks. We put it in a backpack to go home with a child and we believe that now they’re good. No, because they may have dietary restrictions. They may have religious beliefs. They may have you name it, different reasons. So that’s a huge part of what we’re talking about. We’re talking about lifting people up and giving them the respect and the dignity that they deserve.”

Kanefsky also talked about the partnership between Amazon and DoorDash, allowing those who need food to access an online portal and have items delivered from the Food Bank of Delaware. This allowed parents who may not have childcare to get the food they need without choosing between gas money and food or someone who is recovering from surgery to remain at home and have food items delivered. The boxes do not have Food Bank of Delaware displayed on the outside, making the delivery discrete.

The new facility, which will also have a café open to the public and operated by culinary students, should be completed by October 2023.