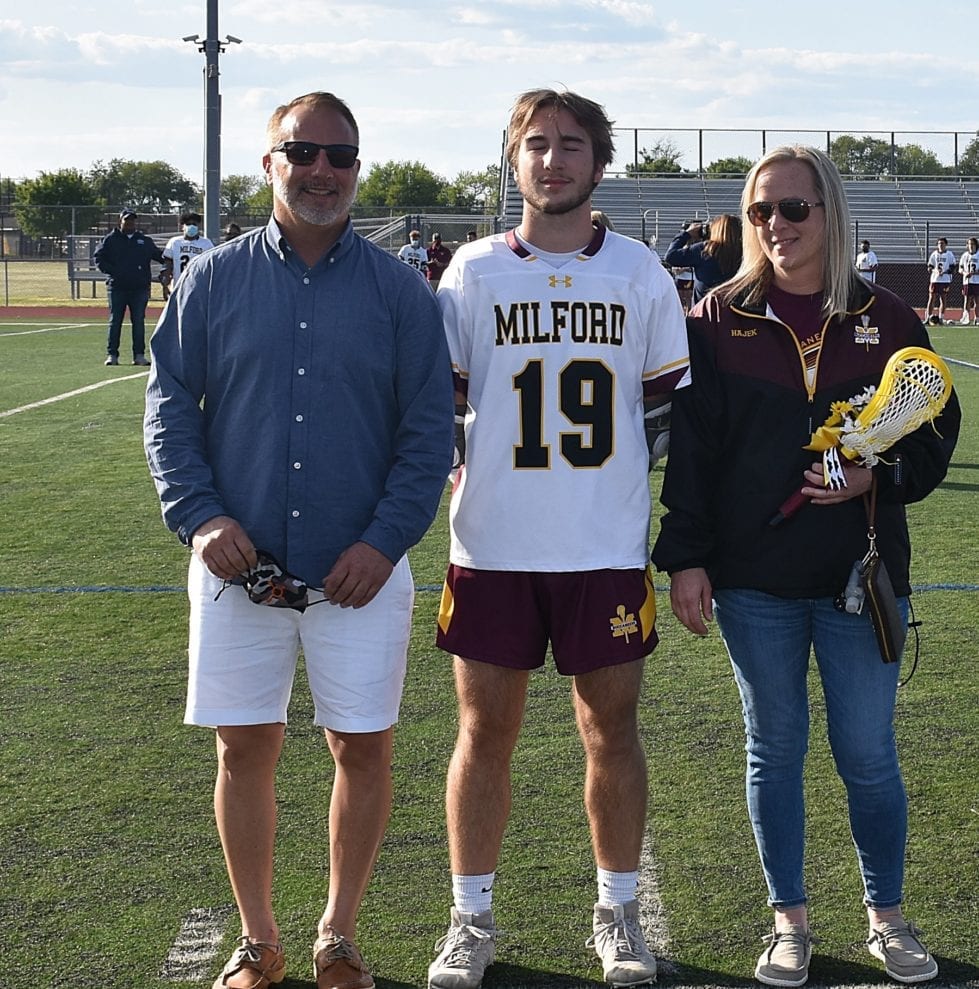 Landan Hajek with his parents

Twenty!!! That’s the number of players from three teams that were named to the 2021 All-State lacrosse squad. Those teams were Salesianum (8), Cape Henlopen (7) and Sanford (5). Taking that into account, that left only five spots to fill out the 25-man squad. The fact that a Milford senior, part of a team that finished 3-12, was part of the squad says an awful lot about the type of player Landan Hajek is. While this was a transitional year for the Bucs, the fact that he was recognized by the majority of coaches throughout Delaware, should tell you all you need to know about the respect Hajek gained over his three seasons at Milford.

Looking back on the season, the game that sticks out in my mind, was Milford’s final game of the year. On that senior night, Milford was battling a Sanford team, that would eventually make it to the state tournament semifinals. The Buccaneers were outmanned and outgunned. It didn’t matter to Hajek, who played from the opening whistle to the final horn all the while encouraging his teammates and recording his 100th goal as a Buccaneer. “The fact that Landan was able to get to 100 career goals, despite an entire season being canceled, says a lot about his heart. But there is so much more to him than that, it’s what separates him from the rest,” Milford coach Blake Faulkner continued. “He is a leader, who always seems to know how to lead, whether it is instructing a player, making sure everyone is ready or just making sure that everyone is in the right frame of mind, Landan does it. He even knows when it’s time to just keep it light, have a little fun, that’s very important and something you can’t teach.”

From Hajek’s point of view, he was honored to be named to the All-State team. “It’s something I have worked towards since I picked up a lacrosse stick. Not to be recognized, but to be the best player I can be. I think this award says something about the effort I put in, so I am very happy to be recognized,” he said. “While it may be my name on the list, it is my teammates and coaches who helped get me there. Lacrosse is a team sport and without my teammates, I would not have achieved as much as I did.”

When looking back at his time at Milford, Hajek shared a specific memory that told you how much getting better means to him. “ I would go back to the playoff game in 2019 when we traveled up to Salesianum. We knew it was going to tough and it was. They exploded out of the gate and by the time we got to halftime we were down 16-3. But we refused to quit, we didn’t give up. We outscored them in the second half 5-4, we showed we could play with them, that meant an awful lot to me,” Hajek said.

The most heartbreaking memory for Hajek is the season that wasn’t. With the 2020 season cancelled due to COVID, Milford was unable to field the best team in the school’s history. “We were so ready; we were really going to show everyone how good Milford lacrosse is capable of being. We had a bunch of juniors and seniors, who had just put together the best regular season (11-2) that anyone could remember the previous year. All the top players from that team were going to come back, then it was all taken away. It hurts, but you just can’t dwell in the past,” he said.

Now a Milford graduate, Hajek will be attending Arcadia (Pa.) University this fall, while majoring in business.